We need to talk about The Book of Boba Fett 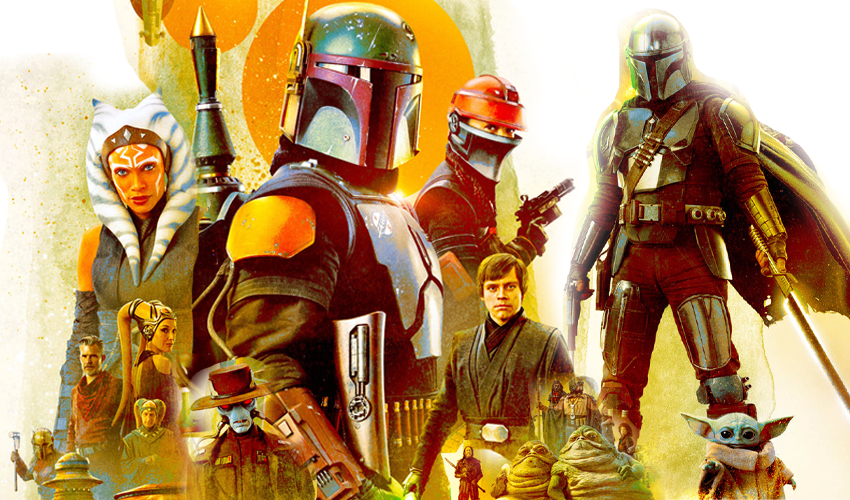 Now the finale of the new live action Star Wars series The Book of Boba Fett has dropped on Disney + it’s time to talk about it.

WARNING: There are spoilers for the entire series of The Book of Boba Fett and The Mandalorian ahead. If you plan to watch both series, read no further.

Many of us Star Wars tragics had the action figure and Boba Fett was by far one of the most enigmatic and mysterious side characters in the Star Wars Universe – a bounty hunter with a jet pack and a cool ship and some dope armour (although we wouldn’t have said dope back then!).

Boba Fett was first introduced in the risable yet trashily entertaining Star Wars Holiday Special and went on to have about five minutes screen time in the original trilogy before being dispatched in the Sarlac pitt in Return of the Jedi. His inglorious end (being knocked into the pitt by the recovering partially blind Han Solo) has always allowed the character a certain mysterious anonymity.

Then in the prequel trilogy he was given a fully-fledged back story with his father Jango Fett paving the way only to return (with an escape from said Sarlac pit) in chapter six of The Mandalorian season two. It was here that he introduced his partner in crime Fennec Shand (Ming-Na Wen) and helped Din Djarin with Imperial troopers, who ultimately stole Grogu away from The Mandalorian setting up an epic finale to that season.

When, in the end credits scene of the season two of The Mandalorian we discovered the spin off The Book of Boba Fett, instead of the next chapter of Din Djarin’s adventures, there was confusion and hope for what lied ahead with the story of Boba Fett (Temuera Morrison) and Fennec Shand.

Since the beginning of The Book of Boba Fett his motivations have been constantly unclear and his allies have been underutilised, particularly Fennec Shand, who over the course of the series has had barely any character development and little to do except have Fett’s back. There have been head-scratching flashbacks, which could have just been chapters in their own right in his escape from the Sarlac pitt and his subsequent working with and finally earning the trust of a Tusken Raider clan.

Even Temuera Morrison, always gamely adding some humour and humanity to his dialogue, seems to be on autopilot. The show has certainly shown Boba making choices, such as his rescue of Fennec and the Mods. But his biggest decisions across the series are constantly undercut by others – case in point in the finale with Mods suggesting the battle come to them rather than the other way around.

The finale reveal that the Pyke Syndicate were behind the deaths of the Tusken clan felt like it should have been more of a revelation than it actually was. But this underscores how little time has been spent developing character motivation when Fett accepts this information only to move on. It should have held more weight and significance.  Yes of course the Tuskens were in the story to hold a mirror up to Boba, in the process no doubt turning him into the kinder, gentler version of himself, only to fall by the wayside to provide a last-minute emotional punch that doesn’t actually land dramatically.

The largest reveal from the season two finale of The Mandalorian was the gut-punch of the father (Din Djarin) and son (Grogu) breakup with Din passing the foundling to Luke Skywalker to pursue Grogu’s true potential as a Padawan.

Not for a moment did viewers expect this story arc to be essentially closed in episodes in five, six and seven of The Book of Boba Fett. It speaks volumes that the reunion of Din and Grogu was expected to play out in season three of The Mandalorian, but instead happened inside some rather rote action set pieces in the (series) finale of The Book of Boba Fett. It needed some narrative heft.

These chapters and the story itself (Mando helping Fett defeat the Pykes – bringing “the muscle”) could have been a side quest in season three of The Mandalorian without needing to be an entire season of its own show.

Din Djarin not only saves the series but makes The Book of Boba Fett an essential watch for those who were invested in these characters from The Mandalorian. It seems odd that if someone is a fan of The Mandolorian, that they will tune into season three and have no idea that a whole storyline has been closed off in another show entirely. Considering how messy the finale is, it’s a blessing that Boba’s story threads are wrapped, perhaps this is the last we’ll see of Boba Fett, save a crossover in the next season of The Mandalorian.

The fact that chapters five and six were directed by Bryce Dallas Howard and Dave Filoni made them feel even more out of place because of the excellent storytelling, added character development and their deep understanding of the characters.

The flawless inclusion of Luke Skywalker de-aged and looking like he has walked of the set of Return of the Jedi, further underscores how weak the primary story was.

Let’s talk about the finale and dramatic stakes

The dramatic stakes throughout the series including the finale were to be brutal from a storytelling perspective non-existent. We had spent no real time with the Mods to understand their motivation for fighting with Fett, or even why these character that felt so out of place were in the show at all. Fennec Shand has so little screentime that Mig-Na Wen should ask for more character motivation if the series is renewed for a second season.

The climactic battle between the Pykes and everyone else in Mos Espa felt strangely contained and without any real peril or dramatic tension. Comic relief is normally injected to justapose dramatic tension, but much of the excellent actress Amy Sedaris’s Peli Motto fell flat because there was no dramatic tension to relieve. The few moments of human connection between Fennec the Mods Jo, the spokesperson for the Freetown gang, felt like last-minute edits to hint at relationship arcs that didn’t exist. Otherwise, the action is static, oddly rooted to confined locations that lack drama or a sense of peril.

Unfortunately, the reunion between Din and Grogu takes the wind out of the sails of The Mandalorian season three more than anything else. It’s too rushed to have enough emotional investment or sound natural. There’s an attempt made to give this moment the space it needs within a hectic chase sequence, but ultimately it moves too fast and takes place in the wrong story.

Grogu’s swagger and character development is also evident in spades because we know him well.

Let’s talk about whether Boba Fett needs another series

Episodes one to four began a story that relied heavily on backstory we already knew and then summarily did away with Fett’s Tusken Raider adopted family, leaving fans expecting its remnant to appear in the finale – they did not. The fact that the Pykes were revealed to be ultimately responsible for the summary genocide of his “clan” really wasn’t leaned into or held any emotional weight, it was simply a line of dialogue.

Cad Bane is an enigmatic and mysterious character that like all in this series was given precious little screen time. The backstory to Boba and Bane’s finale standoff felt like it could have been an entire episode, rather than a surprise reveal for the fans of Rebels and The Bad Batch – and they will be likely uptight about his outcome in the finale.

Never has there been a finale that has held less weight and anticipation for a (possible) second season. The fact that showrunners chose to use the Din Djarin/Grogu reunion and close that storytelling arc speaks volumes about the care factor for Fett, his allies and their ongoing story.

The Mandalorian proved that you can create new characters stories in the Star Wars Universe and care about their existence. All the characters in The Book of Boba Fett? We didn’t know them well enough to care. We didn’t really know where the Mods came from, and it’s a shame that Ming-Na Wen’s Shand was essentially a one-note character with little screen time or character development.

With the focus taken away from Fett in chapters five and six, The Mandalorian season 2.5 felt like a kind of rug pull/knee jerk reaction from showrunners and made the entire season feel like it could have been a side quest for Din Djarin in his upcoming season.

Ultimately, The Book of Boba Fett ends up feeling like a missed opportunity.

While not appointment viewing on its own, The Book of Boba Fett sets up the future of The Mandalorian without ever really giving its own characters room to grow, interesting stories to pursue or – let’s face it – really care about. As much as there has been anticipation for more live action Star Wars Universe stories, perhaps its time to tell some new stories across its vast galaxy.

What did you think of The Book of Boba Fett? Comment below with your thoughts below.