Celebrities who have been surprisingly candid about their faith 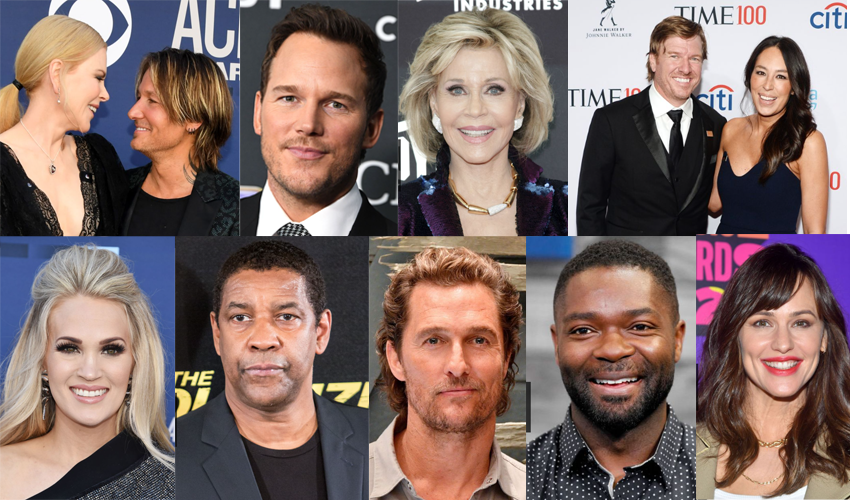 When you are in the public eye, faith or religious beliefs can be considered private, so it is unusual when high profile celebrities open up about how they found faith and what transformation happened in their lives to prompt their faith in God.

For some, being bought up with belief is the key, for others like actress Jane Fonda shares in her blog, a marital breakup can spark an inward journey. Still others like Mark Wahlberg, credit God with their success.

Obviously, there are celebrities who are happy to “thank God” for their awards success. This has become a time-honoured tradition. From actors like Nicole Kidman and Chris Pratt these Christian celebrities are candid about their faith, and they have shared so many inspiring details about their journeys with God.

What follows are some candid revelations about life and faith.

In an interview with Vanity Fair, Nicole Kidman said she and husband Keith Urban regularly attend church with their children. “That’s how we are raising our family,” Kidman told the magazine. “I had a very Catholic grandmother, and I was raised praying, so that had massive impact. I wouldn’t say it’s absolutism, there’s constant questioning.”

The actor has been a Christian since he was a teenager. When he accepted his award at the 2017 Teen Choice Awards, he said “I would not be here with the ease and grace I have in my heart without my lord and savior, Jesus Christ.” More recently, he wrote a sweet Instagram post for his fiancee, Katherine Schwarzenegger, where he said he was proud to “live boldly in faith.”

The star of Grace & Frankie shared her journey with Christianity in a blog post on her site. “Now, as I entered my sixth decade and with much work, I could feel myself becoming whole and I knew: This is what God is,” she wrote. “I am frequently asked about my faith. At the end of my marriage to Ted Turner I became a Christian. For several years prior, I had begun to feel I was being lead. I felt a presence, a reverence humming within me. It was and is difficult to articulate.”

The actor told Relevant magazine that he credits his Christianity for his success in Hollywood.”My faith and my family are the most important things,” he said. “Those things allow me to be successful in all the other things that I’m doing.”

The country star has often been vocal about her relationship with God, both in her music and in interviews. She spoke about a difficult experience with miscarriage to People magazine, and how her faith got her through.

“For the first time, I feel like I actually I told God how I felt,” Underwood told the publication. “That was like a Saturday — and the Monday I went to the doctor to, like, confirm, another miscarriage. And they told me everything was great!”

The former Fixer Upper stars have always spoken openly about their faith, and recently began inviting a local church to host services at Magnolia Market. In The Magnolia Story, Joanna wrote, “I came to think of God as more of a gracious friend who was accompanying me on this journey, a friend who wanted to carry my burdens and speak into my life and shape me into who I really was and who I would become.”

The Oscar-winning actor has often spoken about his faith in interviews. “The fundamental message is in the Bible, which I’ve read three times from front to back, along with some of the Koran and the Torah,” he told Parade Magazine. “If you don’t practice love, you’re missing the point. I believe in love thy neighbor.”

When McConaughey won the Oscar for Dallas Buyers Club he thanked God in his speech. “Now, first off, I want to thank God, because that’s who I look up to. He’s graced my life with opportunities that I know are not of my hand or any other human hand,” the actor said.

After the singer released “Lose You to Love Me,” she posted on Twitter that she felt overwhelmed by God’s love. “He said to me ‘Selena hold on, I hurt when you hurt. I cry when you cry but I will NEVER, EVER leave your side. Work with me, walk with me and watch how I do it.'”

When Oyelowo played Martin Luther King Jr. in Selma, he could connect to the late Reverend’s beliefs. The actor told Religion News Service of his faith journey, “Once I started opening my mind up to just how desirous God is for me to enter into the calling he has for me, I was able to just look beyond what I had seen for myself.”

The actress said on Good Morning Texas that while she grew up going to church every Sunday, she lost that routine in her adult life. But starring in the religious film Miracles From Heaven helped her reconnect to her Christianity.

“There was something about doing this film and talking to my kids about it and realising that they were looking for the structure of church every Sunday,” Garner said. “So it was a great gift of this film that it took us back to finding our local Methodist church and going every Sunday. It’s really sweet.”

The writer of the 1999 film Dogma got into some heat with Catholics for his controversial comedy but has since indicated that he is himself a member of the church. In a fan Q and A, he attributed the fact that he has a film career as to why he believes in God.

As well as the recent reverse-role interview with Dua Lipa, the comedian and talk show host has discussed his faith at points on his various shows. Colbert skewered the American Christian right for years as part of his parody show The Colbert Report, but says his own faith is quite different.