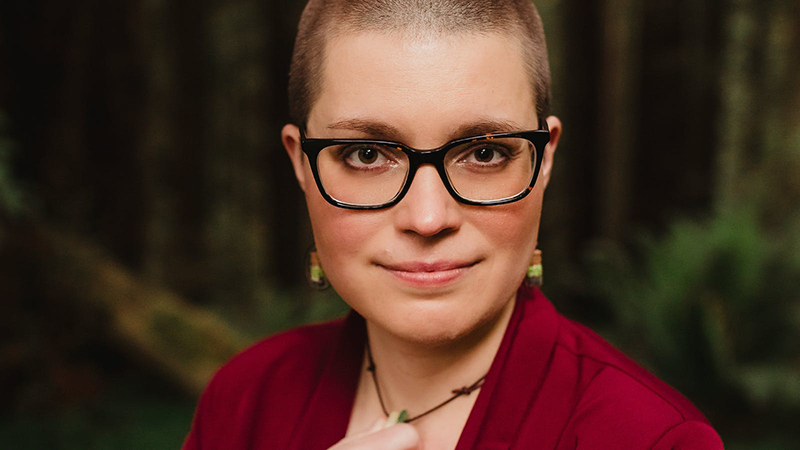 Becky Chambers’ Wayfarer series offers a richly diverse alien galaxy, full of sentient beings with different anatomies, technologies, and cultures. The novel quartet invites readers into a speculative universe where humans have been welcomed as climate refugees, and characters of different species must navigate cultural differences. The series’ final instalment, The Galaxy and the Ground Within, was released in February this year.

For a series with a plethora of non-human central characters, the Wayfarer books have a deeply humane approach to inter-species relations. Chambers doesn’t shy away from the messiness of life but offers a new kind of science fiction that follows different characters’ journeys as they learn to live with each other in the midst of that messiness.

The first book in the series and Chambers’ debut novel, The Long Way to a Small Angry Planet, follows the multi-species crew of a wormhole tunneling ship called the Wayfarer. Tasked with creating a new tunnel from one side of the galaxy to the other, the crew’s tensions flare and friendships deepen. They are ordinary people, good at what they do, who are subject to the political whims of their government employers.

What makes this novel so refreshing is the way Chambers imagines different alien species. Where much of the science fiction genre is concerned with scientific possibilities or spatial exploration, the Wayfarers series encourages readers to think differently about human diversity in comparison to other sentient aliens.

In The Long Way to a Small, Angry Planet we meet scaly bipedal Aeluons who speak in colour with cheeks that change shades. We encounter Aandrisks, feathered reptilian beings whose default household is a group of polyamorous adults raising children who aren’t biologically related to them. We are introduced to reclusive Sianat, fur-covered sentients infected with a disease that allows them to bridge their minds.

Each species has their own values, their own cultural expectations, their own taboos. Together, the crew of the Wayfarer must respectfully navigate those differences to work as a team.

A Closed and Common Orbit, the second instalment in this series, delves deeper into Artificial Intelligence. The book centres on the friendship between a human “modder” (a person who modifies or enhances their body to incorporate technology) and an AI newly existing in a “body”. Chambers skilfully draws various parallels between their lives, and through these parallels poses deep philosophical and existential questions.

The third novel, Record of a Spaceborn Few, explores what humanity has become since leaving a now-uninhabitable Earth as climate refugees and stumbling upon a vast alien galaxy. Set on the Exodus, the enormous spaceship on which the remaining humans escaped Earth, it follows five strangers who are thrown together in the wake of a tragedy.

This book examines the importance of legacy, as fewer humans remain on the ageing Exodus despite its historical and cultural value. Chambers prompts her readers to consider the stories we cling to as part of who we are and where we are from, individually and collectively, and whether those stories must bind us to those places.

The Galaxy and the Ground Within isthefourth and final instalment of the Wayfarer series. A fitting send-off to this wondrous alien galaxy, the novel features no human central characters but again brings together a group of strangers.

Three travellers of different species are stranded on a planet that should have been a pit stop when an emergency prevents them from continuing their respective journeys. Subject to the hospitality of an overenthusiastic host and her child, these aliens find themselves in unexpected social situations, which lead to all manner of cultural, political, and biological discussions.

The Galaxy and the Ground Within offers variying cultural understandings of parenthood: from birthing and raising a biological child without assigning them a gender, to laying an egg whose hatchling will be raised by professional parents, to political choices that prevent a parent from having access to their children.

In the final stage of this series, Chambers invites readers to empathise with beings of totally different species to ourselves – something she has been gradually preparing us for over the course of the quartet. She simultaneously alienates us from these characters who are so fundamentally different from us and “humanises” those same characters by allowing them to be their own complex selves, as ordinary and extraordinary as everyone else in the galaxy.

Chambers dares to imagine open and honest conversations between alien species and envisions how to wrestle with those differences respectfully, but she is kind to her characters when they don’t get it right. Even as we comprehend their strangeness, there is something compelling about each of these characters’ stories, a spark of recognition. If we can see something of ourselves in fictional aliens, surely we can extend that empathy to our fellow human beings here and now, no matter how different to us they might seem.

The Wayfarer novels by Beck Chambers are available in bookstores.

Gabrielle Cadenhead is a mission worker for Christian Students Uniting at the University of Sydney.

PrevPreviousMental Health Day, 10 October
NextSaga to return in 2022Next