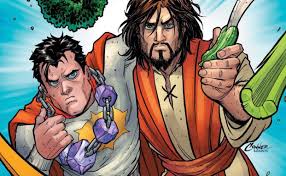 At the end of its six-issue run, the first volume of Second Coming has come to an end. The final issue is, thankfully, a fitting send-off for a series that has always been funny and thought-provoking.

Issue six sees events that have been building up over the course of the series’ arc, with Satan spoiling for a final confrontation with Jesus. Sunstar, meanwhile, gets married and attempts to balance the demands of being a superhero and taking time off with his new wife.

In some ways, issue six’s writing is the most constantly funny of the entire series. There are jokes about the Unitarian Church, marriage, and the usual riffing on superhero tropes, all of which land.

While there are parts of this issue’s plot that many readers may find offensive, it is a thoughtful installment worth persevering with. The issue’s presentation of the Pharisees and Sadducees challenging Jesus on the issue of paying taxes to Rome is particularly worthwhile.

Leonard Kirk and Richard Pace’s artwork is perhaps at its peak in this final issue, featuring everything from giant robots to a Unitarian Church wedding. Once again the art divides between a cleaner, classic superhero style for Sunstar’s scenes, and a sketchier style for Jesus’ segments of the story.

Over the course of Second Coming’s run, Insights has found much to disagree with, especially in terms of how it presents God as an uncaring father who has abandoned His creation, a depiction that runs against the incarnational understanding of the God present in creation. For a series that generated a lot of controversy, Second Coming has also been well worth engaging with, as well as being funny and heartfelt. Mark Russell et al find interesting ways of presenting some key aspects of Jesus’ ministry.

The issue also contains a short preview for Russell’s next series, Billionaire Island.

For those who are interested but yet to check Second Coming out, the first volume has been collected into a convenient trade paperback collection, which will be available in March. The comic would make for great conversation fodder for any comic fans, especially those at the church’s edges. With an end-of-issue note hinting that there is a potential second volume, this series may have a second coming of its own.

PrevPreviousUTC Opening Day opens the college to the community
NextFive Leaf Eco-Awards, from theory to actionNext