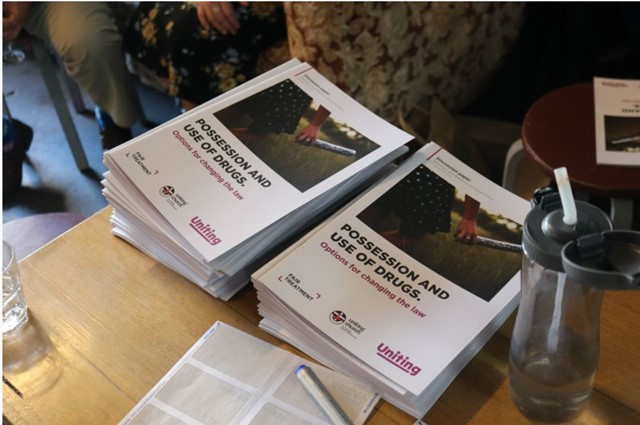 Uniting has released a pivotal Decriminalisation Discussion Paper that delves deeper into options for changing the law around the possession and use of drugs.

The group spoke at a special launch for the paper in Sydney on Wednesday, against the colourful backdrop of the Art from the Heart of the Cross exhibit. Now in its tenth year, the Uniting Medically Supervised Injecting Centre (MSIC) initiative gives clients the empowering opportunity to express themselves and offer their works as part of a silent auction.

The new discussion paper says people who use drugs are some of the most stigmatised members of our society, and there is a desperate need for the laws to change.

It acknowledges an alignment with a comprehensive decriminalisation model, that applies to all drugs, does not apply civil sanctions, and abolishes threshold quantities.

It says civil sanctions, such as fines and community service notices, can exacerbate the underlying disadvantage of which drug dependency is often a symptom.

It recommends consideration be given to a staged approach to removing a fundamental feature of Australian drug law – threshold quantities – which uses the weight of the drug to distinguish drug use/possession and supply, a somewhat arbitrary measure. The paper refers to countries like Spain, Denmark and Uruguay which do not use threshold quantities and recommends relying upon other evidence, such as processing paraphernalia, or evidence of large transactions, to establish the offence of supply.

In the paper’s forward, Uniting NSW.ACT Executive Director Tracey Burton and Uniting Church NSW.ACT Moderator Rev. Simon Hansford explain that the paper was deliberately written to increase our understanding of a complex topic and encourage conversation.

“We are guided by our Christian faith and the way Jesus astonished people with his grace, acceptance, and forgiveness, before he ever offered a word of judgment.”

“We observe that sometimes we must have the courage to take risks and break conventions, as Jesus did.”

In 2016, the Synod passed two resolutions supporting the decriminalisation of personal possession of small amounts of prohibited drugs and an increase in investment in drug and alcohol treatment.

The Fair Treatment campaign was created in 2018.

Last month the NSW Government committed $7.5 billion to build a drug and alcohol rehabilitation facility in Dubbo, as direct result of the Fair Treatment campaign.