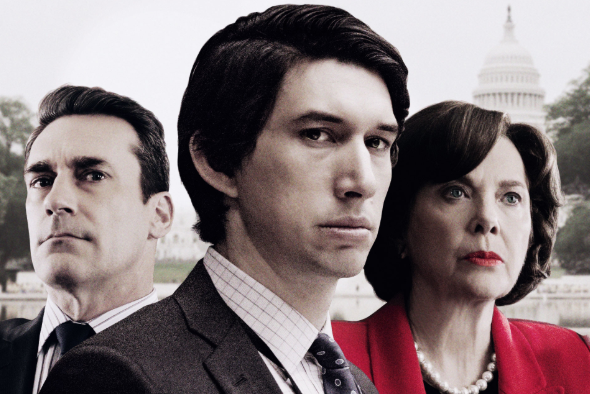 Between 2001 and 2008, the CIA tortured detainees at overseas black sites. Under the euphemistic title of Enhanced Interrogation Techniques (EITs), the CIA’s defense of this program was largely based on its success: if the program led to lives being saved, they could point to this outcome. Years after the program was wrapped up, the agency argued in its favour (arguing for example that it led to the assassination of Osama bin Laden).

Combing over the CIA’s potential crimes (and attendant attempts to cover these up) was the task assigned to investigator Daniel Jones. For over two years, Jones’ team pored over more than six million pages of classified documents, an investigation the Los Angeles Times described as the “most extensive review of U.S. intelligence-gathering tactics in generations.”

The Report depicts the preparation of the report from start to finish, interspersing this with flashbacks to the creation of the program and shots of the torture itself. To distinguish between time periods, the flashback scenes draw on a different filter, bathing everything in a bright yellow hue.

Driver depicts Jones as a dogged investigator whose life is becoming upturned by his obsessiveness. We hear he was previously attached but is no longer because he “wasn’t a very good partner”. The depiction is one of Driver’s usual solid performances, perhaps because he himself has complex feelings when it comes to reflecting on the events described. The actor (who spoke to Insights in late 2019 about his faith) joined the United States army after 9/11, but ended up not deploying due to an injury. He has since described his desire for revenge as a poor motivation.

Jon Hamm portrays White House Chief of Staff Dennis McDonough. In the context of The Report’s story, he is something of the embodiment of the Obama administration’s lack of appetite to go after the prior presidency’s misdeeds.

The Report makes for tense viewing throughout, and not all of the tension is confined to the torture scenes. The cast manage to deliver on the terse exchanges, as even the minutiae of report details are debated. As Jones delves deeper, more and more revelations of the programs sheer madness come to light, and the CIA’s bold-faced lies and attempts to avoid scrutiny are laid bare.

The film’s narrative depicts Jones as one of very few people concerned with ensuring that justice and the rule of law are adhered to, regardless of political considerations. Both the Bush and Obama administrations are depicted in poor light, with the former portrayed as being mendacious, while the latter comes across as callow. The film does give some considerable credit to Senators Dianne Feinstein and John McCain as politicians concerned with accountability.

Flaws are few and far between, but The Report sometimes suffers from a confusing timeline. One minute, we see the program coming together, the next cuts ahead to discussions about its dismantling. For the most part however, the transitions work well.

The torture scenes are particularly difficult to watch, and Insights advises anyone who is squeamish to exercise discretion. These scenes are far from gratuitous, however, as it is important to bear witness to some of the realities of the program as it was implemented.

The Report is one of the most important films of the 2010s and a reminder of how nations can drift from their purported values in seeking revenge. It is essential viewing for all who can bear with its jumping narrative and the violence of the torture scenes.

The Report is streaming now on Amazon Prime.

PrevPreviousResources to assist Congregations during self isolation
NextHow should we view nature?Next