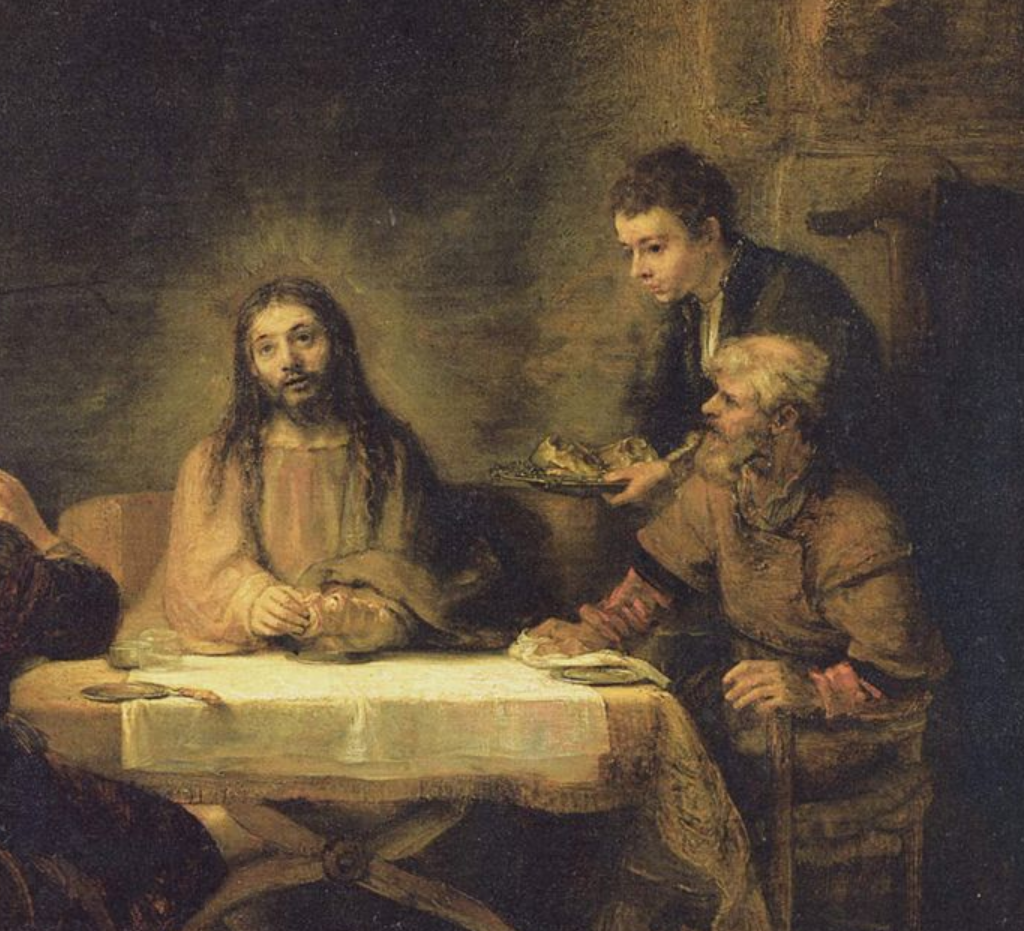 The famous Dutch painter, Rembrandt, painted at least two works depicting Jesus’ meal with the two disciples on their way to Emmaus. The first one was done earlier in his life. It is one of the most dramatic paintings he’s done. Part of the painting is lit up with a shaft of light that falls on the startled face of one disciple and lights up the one wall of the simple room. Silhouetted against the wall we see the profile of Jesus without seeing his face.

In the centre of the painting, the entire focus is on the shocked face of the disciple. It is the face of someone who has just seen an apparition or perhaps the truth as an epiphany .

Sometimes revelation comes as an epiphany; other times it is hardly noticed.

When Jesus’ birth was announced, the heavens became ablaze with celestial choirs and stars flashed across the night sky.

However, by comparison, his resurrection is almost completely bereft of any grandeur – instead the risen Jesus is confused with a gardener, with just another traveller on an ordinary route to a neighbouring town.

In the words of Frederick Buechner: “Jesus came back from death not in a blaze of glory, but more like a candle flame in the dark, flickering first in this place, then in that place, then in no place at all.”

And perhaps deliberately or inadvertently, this has set the tone for the way God has been and is still experienced in this world: a moment of light in this place, then another moment of light or love in that place and then perhaps for the rest, absent, silent and seemingly gone.

And yet this earth, which is the theatre of his presence, is at the same time the dungeon of his absence.

This ambiguity is tangibly present right through the story of the two disciples on their way to Emmaus. While they were walking and talking, we read, “Jesus himself came near and went with them.” Jesus “suddenly came” (Living translation) and walked with them.

It is important to remember that the disciples who watched Jesus being buried on the Friday, had no expectation of seeing him again. Not simply because they didn’t expect a dead person to become alive again, but more importantly because someone who died on a cross as Jesus did, not only died but died disgraced, destined to be forgotten.

So when Jesus joined the two disciples on their way to Emmaus, he would have been the last one they expected to see. In this sense it is not surprising that they didn’t recognise him.

But of course, there’s more: it wasn’t simply a case of not expecting and therefore not recognising him. According to the text “their eyes were kept from recognising him”.

The same point is emphasised by the grammar of this verse. The whole story is told in the active voice and suddenly here appears the passive voice. Whenever this happens in the bible, it is a sure sign that another agent is at work, it is a sign that the Spirit of God is moving here.

Other translations capture something of this by translating verse 16 even more boldly: “God prevented them from recognizing him.”

All this is of course part of a broader pattern here: it is not the disciples who are looking for Jesus; it is he who comes looking for them. They don’t get to know him; he makes himself known to them.

In other words, the miracle of the Resurrection does not arise from any human insight or sharpness of perception or from a bright intellect. If never does.  Recognising the resurrected Christ is a gift from above.

When the moment of recognition came, it was almost as if the disciples recognised him, not with an outer eye, but with an inner eye; not with their eyes, but with their hearts.

Luke tells us that the moment of recognition of Jesus’ presence came at the table where Jesus took the bread, gave thanks, broke it and began to give it to them. Then, he says, their eyes were opened and they recognized him.

In other words, an ordinary place where ordinary bread is broken and shared, unexpectedly becomes a holy place, becomes the door through which the resurrected Lord enters into the lives of two ordinary men. Two men of which one remains nameless and the other one is never mentioned again.

Rembrandt made a second painting of this moment of recognition much later in his life. This painting is completely bereft of any dramatic elements. It just depicts three men sitting at a table while being served a meal. At a first glance nothing seems to be happening. But when you take a closer look, you realise that one of them is pushing his chair back and the other one has brought his hand to his face. These very simple gestures become the most delicate and eloquent expressions of their recognition of the resurrected Christ. The servant seems completely oblivious to what is happening.

In other words, what Rembrandt is suggesting and what he no doubt discovered later in his life, was that the truth of the resurrection doesn’t hit us like a hammer on the head. The truth of the resurrection is revealed to us during the journey, after the resurrected Christ had been travelling with us for some time, as he did with the two disciples on their way to Emmaus. And there are moments in life, often very ordinary moments that hold no promise or expectation of any revelation, that the veil is taken from our eyes.

This year’s Easter journey has been most unusual for all of us. Not ‘unusual’ in the sense of being extraordinary, but in the sense of being uber-ordinary. We were not able to go to church, to join in the Easter celebrations, to greet and hug one another with the familiar Easter-greeting: ‘He is risen, his is risen indeed!’

Instead we stayed at home, with isolation and maybe even loneliness as our only companions. And we keep waiting, waiting for the lockdown to end, waiting for the emptiness to be filled again, waiting for hope to stir in the silence, just like that first movement stirred in the grave on the Sunday morning.

In the meantime, we ask the same question as the Psalmist did: where will our help come from? And what do we say? What do we say to dispel the fear?

In his autobiography, Choose to Love, brother Roger, the founder of the Taize community tells of his visits to Eastern European countries during the Cold War. He visits Budapest during Easter, while under surveillance from the security police. In the morning service he preached and served communion under their watchful eyes. As he distributes communion, he wonders what he will say. In the end he only says these words in Hungarian: “Christ is risen”. During the evening service, he ministers to a full church, filled with young people. And again, he says these words, just these words: “He is risen” – hundreds of times as he distributes the elements. And every time he utters these words, he looks into the person’s eyes and he sees how they evoke an expression of hope. It was as if these simple words were able to speak to their fears, into their emptiness…

‘He is risen’. Perhaps we could learn to speak these words again, speak it in the silence, say it in the solitude, articulate it in moments of anxiety, phrase it daily in our fears. And then wait for the Scriptures to open and the light to break through.

And perhaps remember the words of Cleopas and his unnamed friend: Were not our hearts burning within us when he was speaking to us…?

May the burning of our hearts keep the light of memory burning during these dark times.

Remember: “He is risen, he is risen indeed!”

PrevPreviousCOVID-19 has laid bare how much we value women’s work, and how little we pay for it
NextQuirindi Uniting Church celebrates 100 yearsNext