Not your convent-ional prequel 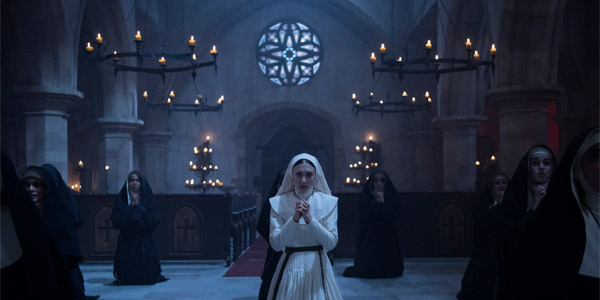 The concept of a church with a dark secret lurking underneath is a horror trope that has been done well before. One of the best examples comes from the 2002 game Eternal Darkness. Early on, the player-character, a monk, enters Oublié Cathedral, which has come under the purview of the Spanish Inquisition. Staying overnight with the intention of seeing a holy relic called the Hand of Jude. With a sense of foreboding, the monk notices that the monastery has no markings, crosses or other symbols, bringing up the question as to what, exactly, the inhabitants worship.  Later, he finds out that it’s not a church at all, but rather a shrine to one of three evil gods, Chattur’gha, Xel’lotath, or Ulyaoth. Exactly which of these evil gods is determined by what medallion the player chooses early in the game.

By contrast, the newest iteration of The Conjuring series, The Nun, is a horror film devoid of real depth that squanders what should have been a fascinating setting.

Set in Romania in the 1950s, the film begins when a Nun commits suicide at an abbey after encountering a demonic presence. The Vatican call on Father Burke, a priest who has expertise in performing exorcisms, to investigate. He is joined by ‘Frenchie’ a man who brings supplies to the monastery and Sister Irene, a nun on her novitiate. What follows is an attempt to solve the mystery as to what is really going on at the abbey, an investigation that lands the protagonists in the middle of a battle between evil forces and the church.

The Nun is a visually arresting film with costumes and visual effects that are consistently impressive throughout. In a strong setting, the actors all deliver strong performances. As such, it’s a shame that the film does not give these the chance to shine.

The way that The Nun overly relies on jump scares is comparable to haunted house at a carnival: there is a lot of jumping but surprisingly little actual impact. Some of these are strong enough to stand out, making it hard to avoid the conclusion that they could have been effective if there were fewer of them.

While no religious horror film needs to be a theological dissertation, The Nun largely shambles its way through worn stereotypes. This is not to say that the film is completely lacking in this area and there are a few interesting aspects to the story as it regards theology. Those willing to look for it will experience a story that has more than one resonance with the Christus Victor model of the Atonement. There is also an interesting early exchange between Sister Irene and her strict Mother Superior. A student points out that the Mother Superior instructed them that dinosaurs were not to be believed in because they were not mentioned in the Bible, to which Irene responds that the Bible is God’s “love letter to us” and that God does not require us to abandon our questioning. These, however, stick out as the only examples in a religious horror whose characters that are largely religious caricatures.

None of this is to suggest that The Nun is an overly bad movie. The major problem is that it is overwrought. With some more judicious editing and a focus on the film’s horrible setting, the material here could have made for a religious horror worth enduring.

The Nun is rated MA and is now playing in cinemas.