Home
Reviews
Read This
How Watergate played out

How Watergate played out 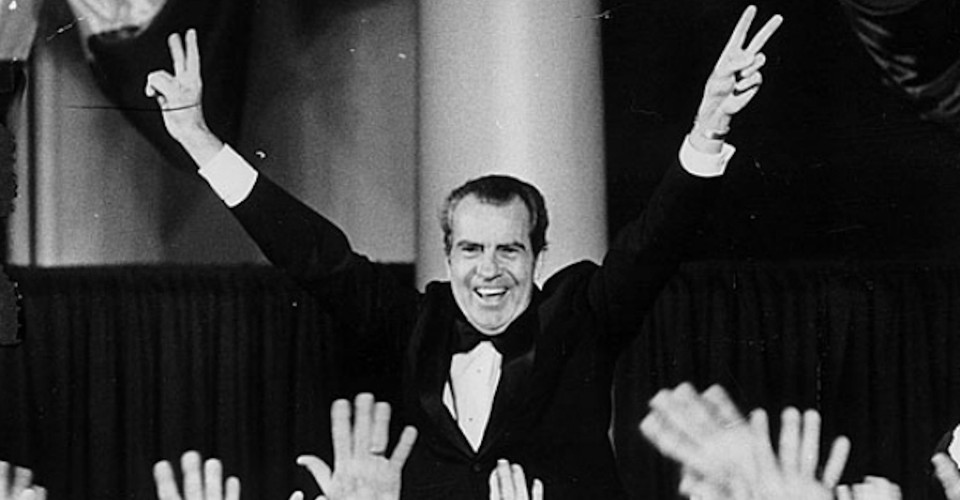 There have been many books written on Watergate but Michael Dobbs says he recognised that as Watergate recedes further into the past, people may have a vague idea of why Richard Nixon resigned as president but might not understand the details or remember the key players and how the gripping drama played out.

In May 1972 burglars with ties to the CIA broke into the Democratic Party offices in the Watergate buildings in Washington, with the aim of finding dirt on Democrat figures. In June the bungling burglars broke in again to repair faulty phone bugs but were caught by police. The FBI quickly discovered links to members of Nixon’s re-election committee, headed by his former attorney general, John Mitchell. Donations to the committee had been used to pay the burglars, and Mitchell had authorised the break-ins.

When Nixon’s aides found out, they hastily organised a cover-up. Nixon soon joined the conspiracy, which included paying hush money to prevent the burglars disclosing links to White House staff. Nixon also instructed the CIA to tell the FBI to back off the case, with the excuse that it was related to a national security issue.

As the press slowly joined the dots, two congressional inquiries were set up. Nixon’s former legal counsel John Dean, who had participated in the cover-up, turned informant and accused Nixon of involvement. Nixon told the public and press that he didn’t know about the burglary or cover-up. He sacked his top men to try and distance himself.

At one of the hearings, which by now were watched by an increasingly enthralled public, an aide dropped the bombshell revelation that Nixon had a taping system in the Oval Office and elsewhere. The recordings would potentially illuminate who was telling the truth – Nixon or Dean. Over ensuing months there were legal wrangles over the tapes, which a judge had subpoenaed but which Nixon refused to hand over, on the grounds of executive privilege, while simultaneously releasing edited transcripts to try and appease the judiciary. Finally, Nixon was forced to hand over the tapes, which corroborated Dean’s testimony that Nixon had obstructed justice. Nixon resigned in August 1974 before facing inevitable and imminent impeachment.

As well as showing a vindictive, obsessive, and uncouth side of Nixon, the tapes revealed that Watergate was only part of a campaign of wiretapping and other illegal activities encouraged by White House staff. While the tapes suggest Nixon didn’t know about the burglary beforehand, he did brainstorm all manner of dirty tricks, contributing to a win-at-all-costs, revenge-driven White House atmosphere.  Sometimes he was just venting; aides wouldn’t carry out his more outrageous demands, but at other times they were infected by Nixon’s darker side, while others (such as Charles Colson, later famously ‘born again’) took Nixon at his word.

Recently there has been more evidence unearthed of Nixon’s deviousness, including his serious and treasonable attempt to sabotage the Vietnam peace talks of his predecessor Lyndon Johnson. There have also been accusations of longstanding ties to the underworld and shady funding.

The title of Dobbs’ book alludes to the fact that Nixon is often described as a figure from Greek or Shakespearean tragedy. He was victorious but destroyed himself in the process. Nixon lacked the gifts of rich parents or natural charm but succeeded against the odds through grim determination and an ability to bounce back. But he got so used to deviousness that he lied even to himself. And he was so used to being the underdog and outsider that even when he won the presidency he remained obsessed with slights from enemies.

Nixon became one of the most significant politicians of the twentieth century, but rather than his foreign policy achievements being his legacy, they were overshadowed by his downfall, which became a lesson for all subsequent political leaders. His name became synonymous with political scandal, reverberating through subsequent American history.

Dobbs’ book does a remarkable job of following the chronology briskly while making tight diversions to fill in the back story and relate biographies of the main characters. And Dobbs writes about how even the little details he includes, like what Nixon had for lunch, shed light on the man. Dobbs concentrates largely on the first 100 days of Nixon’s second presidential term, which makes for an abrupt, seemingly premature ending, but Dobbs’ thinking is perhaps that he is ending at the point where Watergate had run out of Nixon’s control, and although it dragged on for another year before he resigned, in hindsight we can see the end was inevitable, especially once the tapes, so infamously integral to the whole sorry saga, were released.