Inaugural conference asks how we can Walk Together with First Peoples 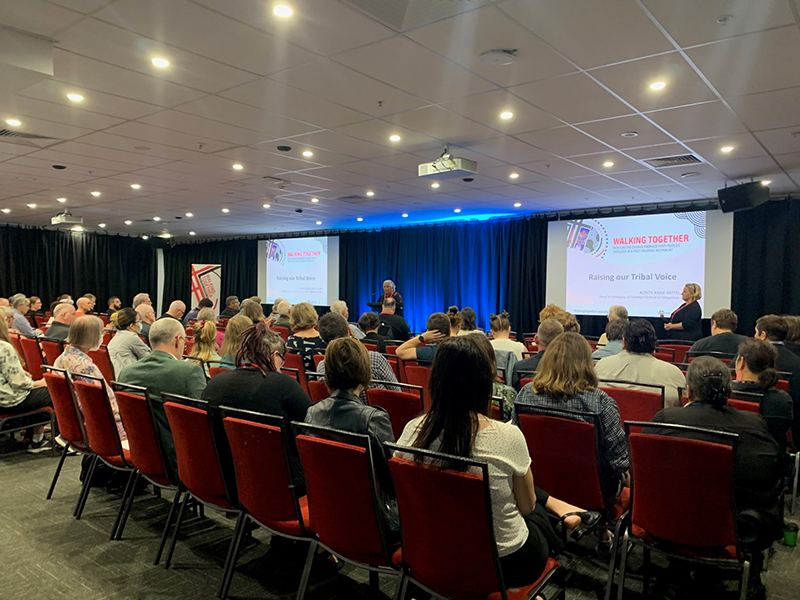 On 22 October, some 100 people gathered in Wesley Mission’s conference centre to hear from First Nations theologians.

Walking Together, the inaugural First Nations Theology Conference, featured four keynote speakers. At points challenging, this was a look into the theology of stolen land and what it meant for the Uniting Church to acknowledge the dispossession and role of Indigenous Australians.

The day began with a Welcome to Country from Aunty Yvonne Weldon from the Metropolitan Local Aboriginal Land Council, Yvonne Weldon is an independent councillor for the City of Sydney and the first Aboriginal councillor in the City’s 180-year history. Yvonne is a proud Wiradjuri woman. She was born and raised in the inner city of Sydney but maintains strong ties to her homelands of Cowra and the Riverina areas of New South Wales.

The first keynote speaker for the day, Dr Anne Pattel-Gray, spoke on the topic, “Raising our Tribal Voice.”

“In the 1980s and 1990s the [Congress] forged a relationship with the Uniting Church…To lead the way in calling for accountability of its churches and the entire nation.”

Dr Pattel-Gray said that Rev. Charles Harris’ vision was more relevant today than it was, as this was founded on the desire for First Nations people to be self-governing.

This, she said, included “de-colonising” readings of scripture.

She said that first nations people’s experience must form part of the task of theology, such as the stolen generations, the destruction of Indigenous people’s lands, and ongoing removal of children. and high incarceration rates.

“The colonial view of God is one that separates the creator spirit from the land. It is not one that Aboriginal people can relate to,” Dr Pattel-Gray said.

The topic of a potential Indigenous voice to parliament was a repeated topic for the the conference. Rev. Pattel-Gray said First Nations Peoples required a voice to parliament, so as to “secure the same rights, wealth, power, and privilege, that is enjoyed by all other peoples.”

“Aboriginal people have got to be recognised by the constitution,” she said.

“We’re tired of other people talking for us. That’s why we’re going to need to have a voice to parliament.”

“Those steps, and educating people, and bringing people with us, are going to bring us to…a treaty.”

“I think the wonderful thing that churches could be doing in driving the truth commissions is leading by example…and start setting the record straight.”

“In this journey, is our redemption as a nation.”

Preparing to walk together in ancient lands

She spoke on the theme, ‘Preparing to walk together in ancient lands.’

Ms Wolfe said there was no relationship yet based on honesty and justice.

“When our kids can’t walk the streets… without being attacked by vigilante gangs…there’s an urgency here,” she said.

“When Aboriginal churches and congregations are closed because of efficiency, and megachurches remain, there’s an urgency.”

“Can we have healing if we don’t acknowledge the pain and causes?”

She said that there was a “sickness” in Australian society as a result of unacknowledged pain.

After the latter, she recalled, ‘never again’ was a popular sentiment. However, children have since been removed from their families in record numbers.

Ms Wolfe said that some hope remained and that Indigenous people had resilience and senses of humour that carried them through.

She added that she did not believe reconciliation was a matter of individual guilt.

“I believe in a faith that is renewing, and is redemptive, so all is not lost,” Ms Wolfe said.

According to Ms Wolfe, telling and exploring were necessary for indigenous and non-Indigenous people to walk together.

This included churches finding out on whose land they were built.

“It means holding our church communities responsible and asking those hard questions,” she said.

“So often the burden is on Aboriginal and Torres Strait Islander peoples to facilitate these processes.”

Ms Wolfe suggested it was now time for non-indigenous Australians to shoulder the burden.

“It’s time for your communities to do the work,” she said. “What might it look like if your agency started the process for decolonisation?”

“As a historian, I want the richness of Indigenous history to be shared and acknowledged.”

“There’s a sense of urgency to all of this.”

A Kairos threshold of opportunity

Rev Dr Garry Deverell is an Anglican priest and lecturer and research fellow in the School of Indigenous Studies at the Melbourne-based University of Divinity. Rev. Deverell is a trawloolway man from northern lutruwita/Tasmania who currently lives in Naarm/Melbourne.

He presented a wide-ranging address, this time on the theme of how the church might redress inequity between Indigenous and non-Indigenous peoples.

Rev. Dr Deverell pointed out that those who participated in the massacre, frontier conflicts, and genocidal government policies, were overwhelmingly Christian.

“Many of you continue to deploy an imaginative terra nulius regarding our people by pretending that we don’t exist.”

“How are the churches, cooperatively, to reckon with the legacy of colonialism?”

According to Rev. Dr  Deverell, there was a direct point of comparison between the Philippians passage and the contemporary church, as contemporary non-indigenous Christians benefited from the stealing of others’ land, and that this mirrored the Philippians’ context.

“How do migrant Christians in churches that are still dominated by euro-centric theologies, those who have empowered themselves at the expense of Indigenous people, let go of that power and reclaim it in a more…health making kind of way?” he asked.

“If you are Christians, it cannot be a matter of whether you return this power, but how,” he said.

Paul, in the context of Corinthians 8, commands Christians in a wealthier church share their resources with a poorer church to redress the imbalance between them.

He indicated that the process might involve treaties on the local level.

“A treaty is a relationship.”

Rev. Dr  Deverell presented a challenge to churches to hand land back to traditional owners.

“One way churches came to receive land was the crown took it from us and passed it along to them without fee or compensation.”

At the denominational level, this included making arrangements to hand properties churches were originally given by the crown back.

At the congregational level, he challenged churches to contribute 10 percent of their annual budget to ministries run by Aboriginal or Torres Strait Islander people.

He said it was a part of the concept of “Setting up camp in the Centre.”

“The fruit of these ministries would make for stronger mob,” he said. “The churches should allow us to set up camp in the centre of your corporate life. The place where decisions are made about ministry and mission.”

This, he said, would also help the church.

“Your churches are in decline because they are seen as being irrelevant and too corrupt,” he said. “The churches need to get with the program. They need to get with what the spirit is doing in the world. You need us and our theological perspectives.”

“Our theology is really different to yours,” he said.

Rev. Dr Deverell said the church was at a “Kairos threshold of opportunity.”

A new beginning for Congress

Rev. Mark Kickett is the Interim National Chairperson, Uniting Aboriginal and Islander Christian Congress (UAICC). A Noongar man from south west WA, Mark was ordained a minister in the Baptist Church in the 1990s. His ministry has taken him from Brisbane to Perth, Broken Hill and Kalparrin near Murray Bridge in South Australia.

He presented a keynote session devoted to the history of the Congress and what needed to happen in order to better promote its vision.

“The place that the First Nations People have in our church is paramount,” he said.

Rev. Kickett said that colonialism was, in the words of J. Kehaulani Kauanui from Wesleyan University, “A structure, not an event”

Against this, Indigenous peoples exist, resist, and persist, and second, that settler colonialism is a structure that endures indigeneity, as it holds out against it.”

“It’s really clear that we build who we are on two world wars, especially the first world war.”

Rev. Charles Harris, he recalled, returned from a Christian Conference of Asia gathering in the Bay of Plenty, New Zealand in early 1982 with the question “Why couldn’t Aboriginal Christians, like Māori Christians, take control of their own destiny?”

“There is a blockage somewhere that does not allow the seeds of this relationship to trickle down to the people in the pews,” he said.

Rev. Kickett shared meeting several people who had never heard about the Congress and the Covenant.

He said that Congress now faced a question of, “how serious the relationship between the Congress and the uniting church is.”

“There is hope and expectation in this gathering.”

The event had the subtitle, How can  the church embrace indigenous peoples theology in a post-colonial Australia?

Nathan Tyson was the event MC. Mr Tyson works with the Uniting Church Synod of NSW and ACT in the role of Director, First Peoples Strategy and Engagement. Nathan is an Aboriginal man who has spent most of his life in Sydney and is of Anaiwon/Gomeroi descent (with connections to the Brown, Munro and Sullivan families from the Tingha region in North Western NSW).

He  acknowledged that the subtitle implied that Australia, “was not there yet” in terms of being a nation that was “post colonialism.”

Moderator Simon Hansford opened the event. He said there was much to the use of “embrace” in the event title.

“There is hope and expectation in this gathering.”

Rev. Hansford said he looked forward to, “many more years of this gathering.”

As well as the keynote addresses, there was a performance from the Pymble Ladies College First Nations Students.

Photos from the morning and afternoon sessions can be found on the Uniting Church Synod of NSW and ACT’s Facebook page.

Visit the Uniting Church Synod of NSW and ACT’s First Nations Resource page for information and other helpful resources.

PrevPreviousKeeping your data safe is our priority
NextAsexuality and the ChurchNext