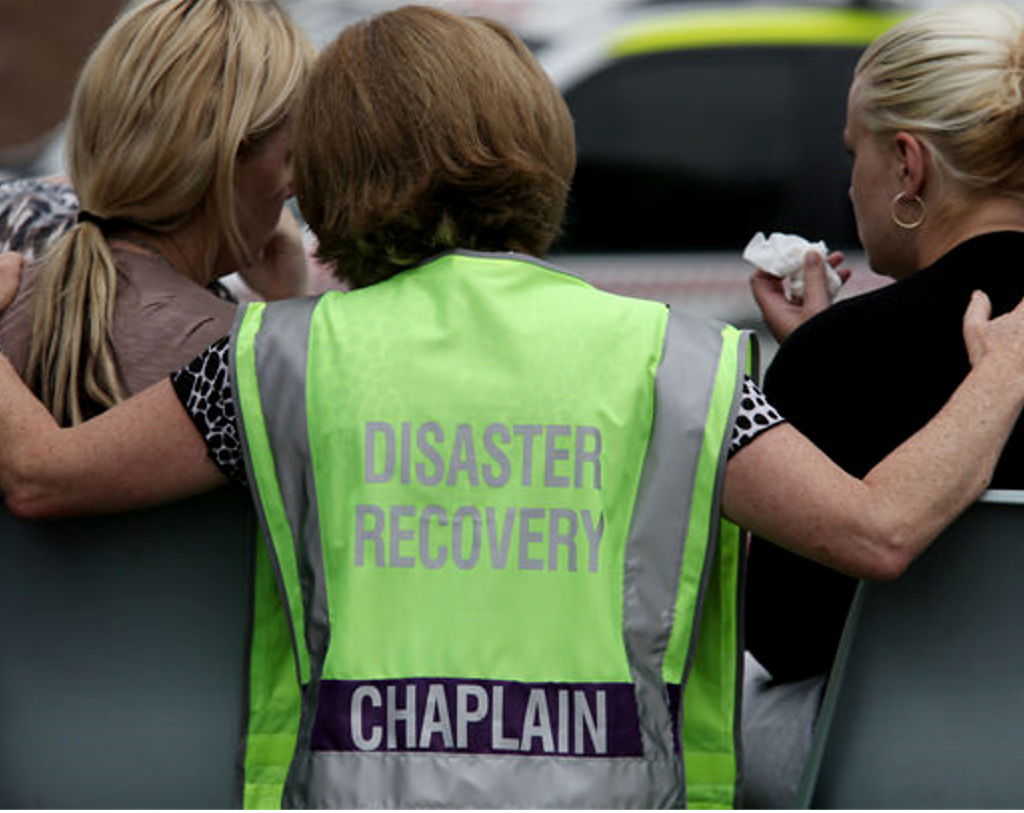 The east coast of Australia has been blasted by an unprecedented ‘rain bomb’ that has inundated communities with record flooding. This unfolding disaster has taken lives, it has destroyed properties and businesses and has devastated many communities.

It was not so long ago that the country was ravaged by the Black Summer Bushfires in 2019/20. These apocalyptic scenes from the fires that saw smoke blacking out the sunlight and turning day to night will not be quickly forgotten.

Disasters are a fact of life in Australia. As a country we are often battling one or several of the three-fold national curses of drought, fire and flood. And whenever disaster strikes, the church plays a pivotal role in responding and helping impacted communities recover.

The Uniting Church’s National Disaster Recovery Officer, Rev. Dr. Stephen Robinson is at the frontline of the church’s response. He is the Coordinator of the NSW Disaster Recovery Chaplaincy Network (DRCN). The network comprises of 360 chaplains from different denominations and faith groups who can deploy in times of disaster to help affected communities.

Supported by a team of gifted and committed duty officers and logistics volunteers, the network deploys chaplains to disaster zones across the state to provide pastoral care and support to communities impacted by natural disasters.

In the current flood disaster there are 35 chaplains deployed across 19 evacuation centres that are accessible by road. The plan is to deploy many more when access is possible. Rev. Robinson expects the response to be a long one with communities taking a long time to recover from such devastating floods.

“Some communities have faced an unprecedented challenge going from drought, to fires, to flooding and then suffering the impact of COVID-19. And now they have been hit again by record-breaking flooding. We have never had such a ‘perfect storm’ of misfortune,” Rev. Robinson said.

He said the impact of COVID-19 had compromised the recovery process leaving many communities hurting and extremely vulnerable.

“In a normal disaster response you congregate, getting people together. Getting the community meeting together is an essential ingredient in speeding the recovery process but this has been made impossible by COVID,” he said.

“Even many months or years after a disaster, community gatherings such as BBQ’s are a critical component in a communities recovery, but even these have not been possible.”

Rev. Robinson said communities on the south and north coasts of NSW and the Hawkesbury Community were among those which had been devastated by fires and then floods and were struggling to recover – even before this latest disaster.

“At present we have Rev. Claire Wright working on the Mid North Coast, and Lynette Graham working in the Hawkesbury area with people and communities affected by flooding in March last year.  These chaplains are doing amazing work and I see more and more of our ministry walking beside people in the longer term recovery,” he said. Both of these positions are supported by the Moderator’s Disaster Relief Fund.

The work for them now is even more daunting with the flood waters still threatening in many of these communities.

Rev. Robinson has also been busy alongside Uniting World in training and facilitating Tongan chaplains to serve their local communities which were impacted by January’s volcanic eruption and tsunami.

In July last year, the National Ministry of Disaster Recovery in the Uniting Church moved from the Assembly Office to be under the wing of the Synod of NSW and ACT.

The disaster recovery work had always been supported financially by the NSW/ACT Synod, Assembly and Synods but every three years had to secure new funding, creating uncertainty for the program.

This uncertainty has now been removed with the decision of the NSWACT Synod Standing Committee deciding to guarantee future funding for the program.

“Given the bulk of the work is within NSW/ACT the Synod’s standing Committee underlined the value upon which it placed this work and pledged to fund the work into the future,” Rev. Robinson said.

There has also been more investment into the work such as the implementation of new software to better recruit, track and monitor chaplains who are deployed into disaster zones.

The work has also benefitted from the employment of Rev. David Riethmuller who has been employed full-time since July last year as the network’s Operations and Connections Manager. In this role, he is building new relationships with other faith groups and agencies.

“This is a ministry that I feel I’ve been preparing for, for many years,” Rev. Riethmuller said.

“My ministry journey has included prison and police chaplaincy, congregational ministry, and community development work in many third world places around the world.

“The DRCN ministry is such a valuable and important offering that the Uniting Church is able to provide to NSW.  What a privilege and joy to be involved in this.”

The DRCN continues to expand with a pilot training course now involving Hindu clergy for the first time as disaster recovery chaplains.

How you can help with ongoing recovery work

A Commissioning Service will be held for Rev. David Riethmuller and Rev Dr Stephen Robinson (Disaster Recovery Chaplains Network) as well as Anne Empson and Rev. Tara Curlewis (Safe Church Unit) and Neil King (Executive Director, Uniting Financial Services) at 5pm on Thursday, 17 March. This event will be in-person and livestreamed on the Uniting Church Synod of NSW and ACT Facebook page.