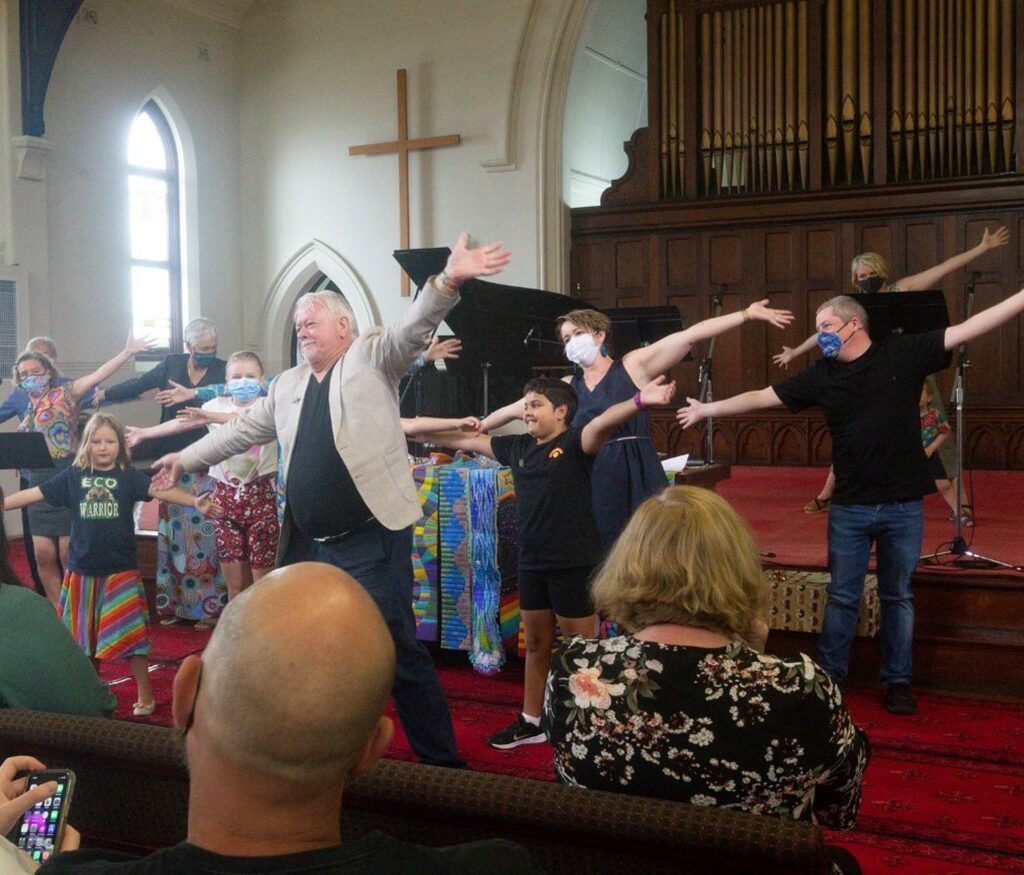 On 13 February 2022, Rev. Dr Rod Pattenden’s ministry at Adamstown Uniting Church came to a close. Many gathered in person and online to participate in Rod’s final service and wish him well in his retirement. Members and leaders of the Adamstown congregation as well as visiting friends and fellow artists came together to celebrate his creative ministry that has spanned three placements and nearly four decades.

An artist and art historian as well as a Minister of the Word, Rod’s ministry has been infused with creativity. From co-founding Interplay in Australia, to making church spaces available to art installations, and painting Adamstown’s front steps rainbow as a visible symbol of welcome, Rod has had a rich and varied career in the church.

Those present heard from some of the many people who have been touched by Rod’s work. Joy Bowles, who worshipped at Paddington Uniting Church while Rod was in placement there, described how welcome she felt when she was unsure if she wanted to be part of a church community again.

Joy remembered part of Rod’s sermon during her first service at Paddington: “Church is like a laboratory; we go and experiment in our lives and then we come back and discuss it with one another and figure out… the way to go forwards from there.”

Stephanie Gesling was mission worker at Macquarie University when Rod was the chaplain there. She told those gathered via video message, “Rod has an exceptional ability to create contextual community art.” She recounted a work of communal art that Rod initiated in the university gallery that enabled students to grapple with grief in the aftermath of the Bali bombings.

Penny Dunstan, an artist who has exhibited at Adamstown Uniting Church three times, described how important Rod’s mentorship has been to her artmaking. Because of Rod’s guidance, she said, she has learned how to write confidently about her art and to consider it a spiritual practice.

Music was led by resident songwriter Heather Price. The congregation then heard selections from Galatians 5 and 6, before Rev. Greer Hudson stood to preach – but not without first donning brightly-coloured socks.

“Art has the capacity to reach within us,” Greer told those gathered, “to go to the depths of being, into a place that we don’t often give space for in our ordinary lives… [There is] something within art that speaks to something within us… Deep cries out to deep.”

Wearing a rainbow-coloured stole that depicts the sun rising, Greer recounted Rod’s passion for creativity and that it is not just for so-called creative people, because “each of us is made in the image of the creator of all life.”

Greer related how at funerals she often advises grieving families to draw their inspiration from their lost loved one’s life as they learn to move forward. While this service was not Rod’s funeral, she encouraged those present to do the same as his ministry comes to a close.

“Rod is an original,” Greer said. “And he inspires us to be originals too.”

During the offering, those gathered watched a video compilation of key moments from Rod’s ministry at Adamstown put together by Rod Barnes, chair of Adamstown Arts – complete with Hallelujah chorus soundtrack.

Former chair of Hunter Presbytery Rev. Stephen de Plater then came forward for the formal laying down of duties. Members of the congregation brought different symbols of ministry and handed them to Rev. Dr Rod Pattenden before he set them on the altar, while shedding a tear or two. Rod was also presented with a Wishing Well fund for his upcoming art exhibition and a joy box for him and partner Euan on behalf of the congregation.

Stephen invited Rod to say a few words in his own defence and the departing minister described his time at Adamstown Uniting Church as “the happiest ten years of my life.” He recognised Euan’s constant support during this time and expressed how important it was that they were able to be visible and loved by the congregation in their relationship. Rod reflected that the children of the Adamstown congregation are who he will miss the most and that it has been such a joy to be part of their lives.

After the concluding song, May our lives and prayers be one by Paddington Uniting Church’s Paul Somerville, Rod invited the kids to come forward to help him with the blessing. In signature Rod fashion, this involved improvised arm movements that illustrated spreading the blessing to everyone gathered and brought smiles to many faces.

Rod told Insights, “I am somewhat overwhelmed by the kindness and generosity of a community that I greatly love. I will take this gratefulness as food for the next stage of my life’s journey!”

Gabrielle Cadenhead is mission worker for Christian Students Uniting at the University of Sydney.

All photos by John Cliff.

2 thoughts on “A Creative, Original Ministry”