A confronting story of family and social dysfunction 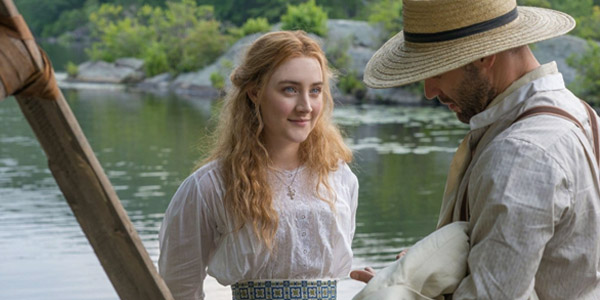 Nineteenth century Russian literature probably set the bar for the study of family and societal dysfunction. Anton Chekhov’s The Seagull ranks high among them and Michael Mayer’s new movie version does justice to this classic tragi-comedy.

Beautifully filmed on a country estate overlooking a lake, which almost becomes a character in the story not just the setting, The Seagull’s plot revolves around an aspiring young actress, Nina (Saoirse Ronan), who falls in love with Boris (Corey Stoll) a famous writer who comes to visit the estate near her home. Before we meet Boris, however, we see Nina romantically involved with the young man from that estate, Konstantin (Billy Howle), who is also a playwright, exploring new forms of dramatic expression.

Boris is present because he is romantically involved with Konstantin’s mother, Irina (Annette Bening), who is an ageing actress and obsessive narcissist, one of those women who draws people to her circle because she seems so generous of spirit, while driving those closest to her away by her smothering demands cleverly disguised as love. Konstantin is desperate to win her approval and, I think sees Nina the actress as a surrogate. The combination of his failure to be either loved by his mother (in a way that satisfies his need for recognition) nor needed by Nina (in a way that substitutes for maternal approval) provides the tragic element around which the plot moves.

Boris spends his time taking notes of observations from the lives of those around him. He’s incapable of actually living – he can only observe and write about what he sees. Nina falls for Boris, not because she loves him as a person, but because she loves the idea that being with him would elevate her to greatness. She calls herself a seagull, drawn to the stage as the bird is drawn to the lake. Boris openly entertains Nina’s fantasy, telling Irina that this could be the chance he didn’t have to enjoy youthful love, all the while knowing that it wouldn’t and couldn’t end well.

Around these central figures is an ensemble of family and friends, all critical of their own lives, however successful, and experiencing unrequited love.  Though somewhat depressing, the writing is imbued with moments of cleverness and the characters’ miseries play off one another in a manner creates a sustaining humour. It’s dark, but it’s humour.

In particular, the character of Masha (Elisabeth Moss), the daughter of the couple who run the farm on the estate. She’s in love with Konstantin, who pays hardly any heed to her. She deals with life’s harsh reality by accepting it, embracing it and flaunting it. She sniffs snuff and drinks vodka. When Boris looks disapprovingly at her for this she says, “Don’t look at me like that, women drink a lot more than you think. A few do it openly like me, but most keep quiet about it. Oh yes they do.” Masha is always dressed in black because, as she says in one of Chekhov’s most famous lines, “I’m in mourning for my life.”

The acting in The Seagull is quite superb. Annette Bening delivers Irina’s barbs with a disingenuous sweetness and egotistical frailty that is simply brilliant; Saoirse Ronan portrays Nina’s genuine sweetness and frailty – and ultimately her strength – with a sparkling intensity; Elisabeth Moss’s Masha, though the blackest of characters, ironically shines with more light than the others because she sees things more clearly than anyone else; and Billy Howles’ tortured Konstantin exudes throughout the sort of confused desperation that means the climax is not really a shock. Alongside them, Brian Dennehy plays Irina’s brother, Sorin, with a wistfulness and patience that provides a bit of backbone to the ensemble.

The Seagull is a confronting story about what motivates us as humans, the nature of love and selfishness, the things that consume us and the way we deal with life’s challenges. God doesn’t get a look in, really, because as a writer Chekhov was interested in how people actually exist in between the extremes of belief in God and atheism. There is, therefore, something of the book of Ecclesiastes about it – vanity, all is vanity. Personally, I found myself reflecting on the gospel’s message that there is One in whom true love can be found, in whom true beauty exists and where darkness can be turned to light.

It’s not an easy movie to watch. It’s not meant to be. But the force of the performances, the realism of the characters (you will see members of your own family in there somewhere!), the beauty of the scenery and the presence of just enough dark humour, make the effort worthwhile.

The Seagull is now playing in cinemas.