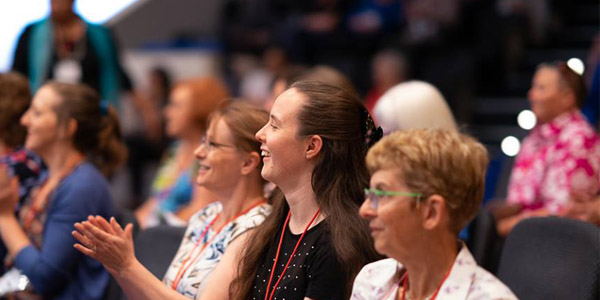 The biannual conference, Uniting Women, was held in Brisbane over the last four days of September. It was an encouraging, inspiring and challenging conference.

Starting on Thursday night, around 300 women from all over Australia and a handful from overseas, gathered for a poetic welcome to country by Turrbal woman, Baringa Kukoyi and some harmonising circle singing led by Stephanie Dick.

The Honourable Di Farmer, Minister for Child Safety, Youth and Women and Minister for the Prevention of Domestic and Family Violence gave some sobering stories and statistics concerning women’s safety. She was very encouraging of the Uniting Church’s positive, supportive and respectful response to the Royal Commission into Institutional Responses to Child Sexual Abuse.

President Elect Rev Sharon Hollis shared about some of the women that had inspired her over the years, biblically, historically and personally.

Greeting the participants early on Friday morning were comedy duo Yvonne McRostie and Fa Matangi in their ‘lounge room’. Daily they would let everyone know the agenda, introduce speakers, and, most importantly, when we would get fed, all with jokes and much laughter.

Friday and Saturday started with worship, led by musicians from Newlife and The Gap Uniting Churches.

The first Bible Study was an insightful reflection on Ecclesiastes by Victoria Lorrimar. A PhD candidate, she articulated the tension between joy and pessimism described by the Teacher in this book of wisdom literature.

The first Keynote Address was presented by Eloise Wellings, a Commonwealth and Olympic middle distance runner who has overcome physical and mental obstacles. Using Joseph’s story as a parallel, she reflected on her own life’s journey and how God took her to Uganda and established a loan scheme that has impacted tens of thousands of people through agricultural training and the provision of seeds.

The second Keynote address was an inspiring presentation by artist Lyn Diefenbach. Working in pastels, she actually ‘painted’ while sharing parts of her life story and teaching artistic techniques. The resulting artwork was auctioned off to raise funds for UnitingWorld’s aid relief for Indonesia.

In the afternoon the participants broke into Workshops. There were a variety on offer including leadership, ethics in schools, evocations, simulation activities, bell ringing, community building, make-up application and singing, among others. I participated in a teaching session on The Circle Way, with Penelope Hamilton. The Circle Way is a dialogue practice that offers tools for collaboration and conversation. Bec Reidy and Robyn Hardge-Scott very capably led a workshop on Engaging with People on the Margins.

That night was a fundraiser dinner. Park Uniting Church’s Tongan Congregation put on a traditional feast, that was much enjoyed.

Jane Kennedy, Associate Director for UnitingWorld’s Asia and Africa programs, led Saturday’s Bible Study. In this she explored the issue of social connection as the greatest contributor to longevity and the importance of life-giving contribution to a healthy ‘tribe’.

The majority of the day was spent introducing and practicing a process called Open Space. Also known as Unconference, it is an acknowledgement that some of the best discussions and most helpful interactions happen in the breaks at traditional conferences. Tina Lathouras facilitated the experience, explaining four principles (which were basically an acceptance of the people, outcome and timing that eventuated) and one law (giving permission to leave when desired) that governed the process.

In the afternoon we were saddened to hear that one of our guest speakers, Martha Yamsiu from Vanuatu, had not been granted a Visa in time for Uniting Women. Instead Brenda Spencer and Mardi Lumsden from UnitingWorld shared about the gender inequality and high rates of violence in the Pacific, which are often supported by Scripture. Encouragingly, Pacific theologians are working and writing to change this.

The final session for the day was titled Beyond Wonder Women: What Now for the Next Generation of Women Leaders in the Church? Sharon Hollis, Sureka Goringe, Thresi Mauboy and Sue Ellis responded to three questions posed by facilitator Heather den Houting. We were given a variety of insights, challenges, experiences and wisdom to better prepare for leadership in the church.

After dinner we were treated to the annual Brisbane Festival’s Riverfire, with jet flybys, music inspired by science fiction and superhero movies and a huge twenty minute fireworks display.

The final day started with sharing stories. A variety of guest speakers shared about women in their lives who had helped and supported them through disability, sporting success, living in a poverty postcode, musical and ministry achievements and domestic violence.

The final Keynote Address was given by Brooke Prentis. An indigenous woman, she and Aunty Jean Philips, challenged the participants to recognise the injustices that surround Aboriginal experience and work together to weave a new Australia.

The Conference finished with an open worship service and communion.

Preparations for the 2020 Uniting Women in Darwin are already underway for 9-12 July.