Home
Reviews
Where does your confidence reside?

Where does your confidence reside? 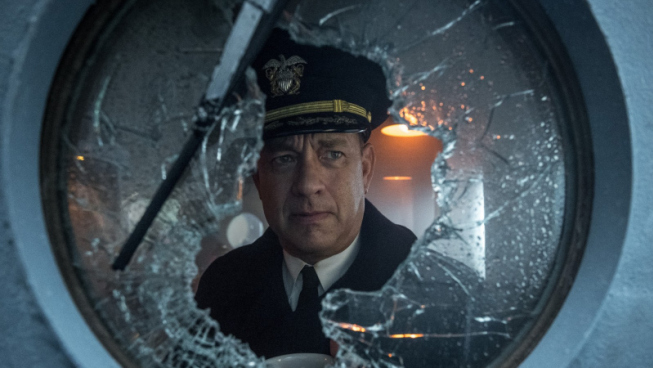 The Battle of the Atlantic was a long-forgotten, yet significant component of the European theatre during World War II. The author, C.S. Forester, who was known for his Horatio Hornblower series, also penned the novel, The Good Shepherd in 1955. A meticulous depiction and homage to the naval forces who sailed the seas during this era. It also served as the inspiration for Tom Hanks to pen the screenplay for this legendary sea battle.

The destroyer USS Keeling was given the codename, Greyhound and it was the lead military ship to lead a convoy across the ocean. This contingent of boats includes dozens of freighters and passenger ships that hold supplies and troops that are meant to supply the war effort. Commander Ernest Krause (Hanks) has been assigned to the vessel for his first command. He leads his men and two other military ships into the dangerous waters that are infested with the infamous U-boat fleet known as the Wolf Pack.

Their voyage is measured by the time between the American and British coastlines. These are safety zones that are both protected by the watchful eyes of the air force. During the cold days of February on the high seas, it is not long before the convoy is intercepted by the underwater enemy. Despite his limited experience in the Commander’s chair, Krause pulls on all of his nautical expertise. He reaches deep into his training to navigate the ship and his men through continual attacks by the unrelenting enemy forces. Each hour brings new challenges and the convoy does lose some of its ships, but the steely demeanour of the faithful leader may be the very thing the fleet needs to survive the three-day journey.

Commander Krause was a fictional character developed by the famed author. Still, the history that he based the novel on was very real. He was known for his desire for authenticity in his narratives and Hanks honours this element of the screenplay. The Academy Award-winning actor does utilise dialogue that is more accessible for audiences, but this does not diminish the technical skills that were needed for these battles. The tight-knit quarters and quick decision making required by every man on the ship was complemented by the visual intensity of these crossings by director Aaron Schneider (Get Low).

This filmmaking combination shows the importance of the crew’s confidence in their leader, which Hanks manages to flawlessly embody. Through his words and actions, he can show the strengths and weaknesses of the character without losing the trust of his men. Relying on his strong Christian faith, clear communication with those who report to him and an unrelenting work ethic, this proves to be an exceptional example of leadership.

If this film has any flaws, it will primarily be the lack of character development of most of the cast. Outside of a brief personal moment with the captain’s love interest played by Elisabeth Shue, there is very little to be known about Commander Ernest Krause. He is obviously a man of faith and strong leadership skills, but the film jumps right into the seafaring action. Not that this diminishes the visual spectacle of the film, but it does leave the audience wanting to know more about everyone on screen.

Greyhound allows Tom Hanks to show his passion for the Greatest Generation and the importance of the average man during World War II. A role that allows him to do what he does best, playing the everyman who manages to do something extraordinary in the most important of times.

One thing that Tom Hanks has subtly managed to do is introduce one of the most endearing Christian characters in cinema in years. He shows Ernest Krause praying throughout his seafaring tale. The Commander does his job with conviction and mercy, while still managing to maintain the respect of those who follow him into battle.

The Bible passage Hebrews 13:8, ‘Jesus Christ is the same yesterday and today and forever,’ plays a significant role in his character and the film. A quiet message of hope and resolve that is seen in this role that seems to say that his faith is not in himself, but in God. A daunting excursion when the audience sees the rough waters that this leader must travel. Yet, one that conveys tone that goes beyond mere self-assurance and shows the value of a belief in the one who truly holds each moment in his hands. A truth that is true, yesterday, today and forever.