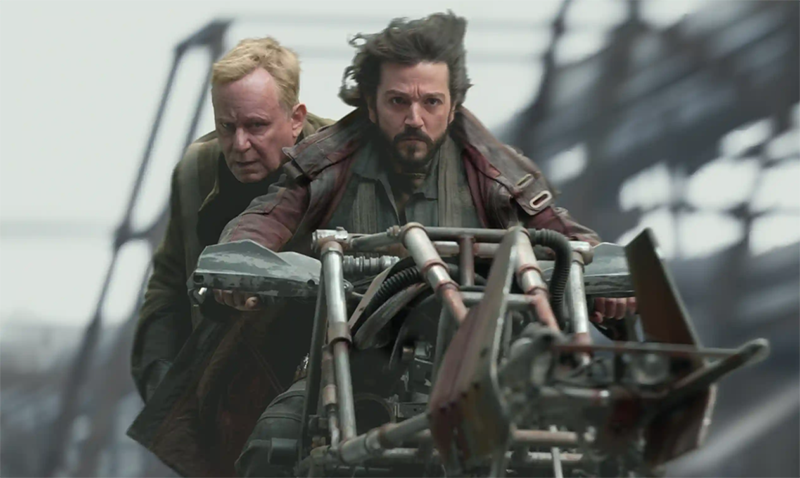 Warning: Spoilers in this review go up to episode eleven of Andor. If you are yet to watch the series we suggest you bookmark this review and come back later.

There isn’t a lightsaber or a Jedi in sight, but somehow Andor has officially become one of the most interesting Star Wars stories in its universe.

Always ripe for a backstory, Cassian Andor (Diego Luna) was introduced in 2016’s Rogue One as a full-blown rebel ready to give his life for a crack at the Empire to bring it to its knees. As we all know how that story ends it is interesting to go back, with the same storyteller from the original film — writer-director Tony Gilroy — to trace his story and follow the fascist political intrigue that lead to his eventual reformation as a rebellion fighter.

Unlike any other Star Wars story, the beauty of Andor is in its storytelling structure, also unique to the Star Wars universe. Over its 12 episodes it is able to build a complex tapestry with multi-layered characters told over three story arcs – part origin story, part heist, part prison break – all set amongst the fascist background of the Empire and the budding Rebellion.

In the same way that director and writer Tony Gilroy told the rather bleak story of the rebellion and what led to the destruction of the first Death Star in Rogue One, Gilroy was also hired as writer and showrunner on Andor. That kind of bleak yet bold approach to storytelling sets the tone of the show — revolution is costly for everyone involved.

The slow burn of the first three episodes positions the young Cassian as a thief with no love for the Empire, who is ripe to be bought under the wing of Luthen Rael (the brilliant Stellan Skarsgård). The story then moves through a job-for-hire mercenary heist, and the subsequent fall out as Cassian is on everyone’s most wanted list. But as Cassian’s mother Maarva (Fiona Shaw) tells him he is “just the first spark of the fire.”

Meanwhile on Coruscant, a planet familiar to those familiar with the Star Wars films, we meet a young Mon Monthma (Genevieve O’Reilly) the only character who will make it past what eventually happens after the events in Rogue One. Mothma’s story of a senator who is trying to keep the actions of her rebellious sister and the toll of the rebellion on her bank account secret, is another way into a story that is politically dense and full of grey areas, instead of the black and white good vs evil paradigm which has come to categorise the Star Wars universe.

Like Luthen, Mothma’s wealth affords her some privileges for which she is constantly under scrutiny, all the while antagonising in the Senate for peace and challenging the status quo.

There is also a refreshingly human take on the Empre as well, as we see the inner-workings of the Imperial regime play out like a workplace drama, where we meet the ambitious employees of the Imperial Security Bureau. Up and coming Dedra Meero (Denise Gough) the only woman on the ISB board seeking to make her mark and the disgraced zealot Syril Karn (Kyle Soller) who just wants to get back in and make a difference, despite his challenging backstory. Both have an axe to grind and a personal agenda to abide by.

These characters aren’t background hall extras in the corridors of power, and somehow seem even more insidious in their tactics and motivations.

Imperial motivations aside, the overall theme shot through Andor is that no one is safe and no sacrifice is too great, and this is never more evident in Luthen’s speech in the final scenes of episode ten, titled “No Way Out”.

In the final moments of episode ten, we are metaphorically and literally plunged into the most haunting musing on the cost of revolution.

“Calm. Kindness, kinship. Love. I’ve given up all chance at inner peace, I’ve made my mind a sunless space. I share my dreams with ghosts. I wake up every day to an equation I wrote 15 years ago from which there’s only one conclusion: I’m damned for what I do.

“My anger, my ego, my unwillingness to yield, my eagerness to fight, they’ve set me on a path from which there is no escape. I yearned to be a savior against injustice without contemplating the cost, and by the time I looked down, there was no longer any ground beneath my feet.

“What is… what is my sacrifice? I’m condemned to use the tools of my enemy to defeat them. I burn my decency for someone else’s future. I burn my life, to make a sunrise that I know I’ll never see. No, the ego that started this fight will never have a mirror, or an audience, or the light of gratitude. So what do I sacrifice?

Sacrifice is not new in the Star Wars galaxy. Luthen’s tragedy is not to lose his life literally, but that he must go on living having made the choice to empty it—and hopefully see a future where the people around him can have the things he has let go of.

Andor has added a rich texture to the Star Wars universe and this is never more evident in the thrilling season one finale “Rix Road” as all agendas that have been told across multiple storylines and are drawn together on Cassian’s adopted home on Ferrix and the results are literally explosive.

So many elements of the story have leaned into its building toward Rogue One. We see for instance in the final post credits scene that Cassian was building the parts in prison on Narkina 5 that would be used to construct the Death Star, the weapon he would steal the plans to destroy, but himself be killed by.

And that’s just as compelling, just as tragic, and just as heroic as any of Star Wars’ grandest sacrifices.

All episodes of Andor Season One are now streaming on Disney+