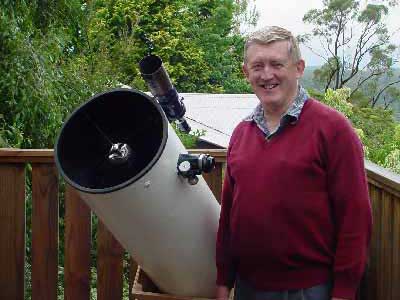 Rev. Rob Evans, Uniting Church minister and acclaimed astronomer, passed away on 8 November after a short illness. He was 85.

Rev. Evans has been remembered for his work for the church and as a visual astronomer.

Initially trained and ordained as a Methodist Minister in 1967, he retired from ministry in 1998.

In an obituary published on the Linden Observatory Facebook page, Rev. Evans’ contribution to astronomy is said to be, “unlikely to ever be surpassed.”

“He was especially well known for his work in Supernova discovery, as he visually discovered 42 Supernova, and another five from photographs.”

Rev. Evans took up Supernova hunting around 1955, but his first adequate instrument, a 10-inch (25 cm) Newtonian telescope was assembled in 1968.

While living in Coonabarabran, New South Wales he used his own telescope. From 1995 to 1997 he had access to the Siding Spring 40-inch Telescope at Siding Spring Observatory, resulting in about 10,000 galaxy observations, another three visual supernovae discoveries and an additional four supernovae spotted on photographs made at the observatory.

Rev. Evans was interviewed by historian Bill Bryson for the book, A Short History of Nearly Everything.

“There’s something satisfying, I think, about the idea of light travelling for millions of years through space and just at the right moment as it reaches Earth someone looks at the right bit of sky and sees it,” he said.

“It just seems right that an event of that magnitude should be witnessed.”

Rev. Evans also wrote and published books on the history of 19th and 20th century evangelism under his imprint, Research in Evangelical Revivals.

In 1998, he was recognised for his contributions to science with the Medal of the Order of Australia (OAM).

The service will also be livestreamed via YouTube here.