Home
News
Religious freedom is a matter for all Australians 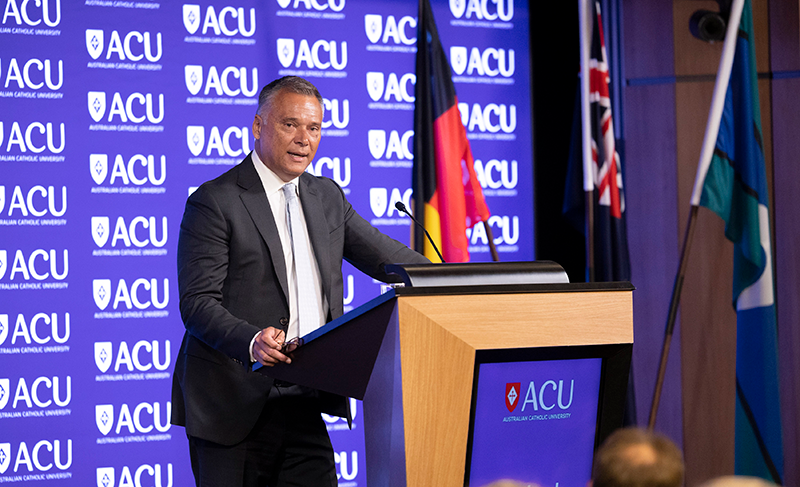 Discussions about religious freedom in Australia should aim to unite the nation rather than divide it, guests at the Australian Catholic University’s sixth Parliamentary Interfaith Breakfast have heard.

Over 160 guests, including around 50 faith leaders and 50 parliamentarians, gathered for the Parliamentary Interfaith Breakfast at the National Press Club in Canberra on 24 November 2022, after a two year hiatus due to the pandemic.

Journalist and Wiradjuri elder Professor Stan Grant said love for neighbour, even in the midst of evil, had the power to unify all people no matter what their beliefs.

“All around the world I have seen the truth of love in the face of horror,” Professor Grant said.

“Love is the first lesson I learned in the little mission church in Griffin where I was raised. I knew that I was hearing something that was going to stay with me for the rest of my life and I could feel in that little church, love.”

Speaking to his Indigenous heritage, Professor Grant said love was also at the core of the Uluru Statement of Heart.

“I know we’re going to a referendum, and there are words to be spoken and arguments to be had, and that’s what a democracy does.  Can you read and deny to me that you are not hearing words of love, that there is not the hand of God in the words of that page?”

Federal Attorney-General Mark Dreyfus referred to the national debate on freedom of religion in Australia in his address. Mr Dreyfus outlined the commitments of the current Federal Government, saying the Australian Labor Party was “more reflective of the diversity of Australian than ever before”.

“For many Australians, religious forms a central part of their personal identity and value system, and it helps guide how they want to raise their families. This Government will always stand for a genuinely inclusive society in which everyone belongs and everyone can participate,” Mr Dreyfus said.

While previous debates about religious freedom had been “unnecessarily divisive”, Mr Dreyfus said a genuinely inclusive society could only be achieved “by working together”.

“It’s my strong belief that these are matters that should be above party politics,” Mr Dreyfus said.

Leader of the Opposition Peter Dutton said, based on the growing faith communities in Australia, the nation was “far from being a godless country”. He cited the success of Australia’s migration policies, which has led to a sustained growth of many religious groups in the country.

“Australia has embraced people of many backgrounds, many faiths, and indeed those of no faith,” Mr Dutton said.

“Religious tolerance is therefore in our national DNA but it is being tested.”

“We must call our religious intolerance wherever it manifests, regardless of the faith it is targeting.”

Speaking at his first Parliamentary Interfaith Breakfast as ACU Vice-Chancellor and President, Professor Zlatko Skrbis said the university was one of the few higher education institutions where faith was at the core of its identity.

“This annual gathering serves as a unique opportunity to provide a space for open dialogue, where conversations can take place that concern our democracy, our community, our culture, and the role that faith plays in our everyday lives,” Professor Skrbis said.

Professor Skrbis said he agreed with the Archbishop of Canterbury Justin Welby, who on his recent visit said people from secularised Western societies had “lost the ability to disagree well”.

“In this climate, religion is itself often seen as a source of divisiveness, a cause of tension, and a tool to legitimatise conflict. This is despite the fact that religions, at their core, aim to foster peace and understanding,” he said.

“That is why we believe it is crucial to keep alive these spaces that promote respectful and productive dialogue – across religions, across cultures, across politics, and across the communities in which we live.

“It is testament to the culture of tolerance and harmony that we are be able to hold such an event, where representatives of diverse religions and political persuasions can gather in the same room in the spirit of mutual respect.”

ACU Chancellor Martin Daubney said the interfaith breakfast was significant given recent debates into the protection of religious freedom in Australia.

“The increase in those who say they have no religion in the 2021 Census has given us all much to think about. Despite this, Australia remains predominantly a religious country, but one made up of minorities,” Mr Daubney said.

“Australia is a country which looks after the rights of minorities. We are not a country where minorities become second class citizens. And we are not content to leave minorities to be treated with hostility and suspicion. This applies to religious minorities as well.”

ACU has hosted the Parliamentary Interfaith Breakfast in multiple capital cities since 2014.