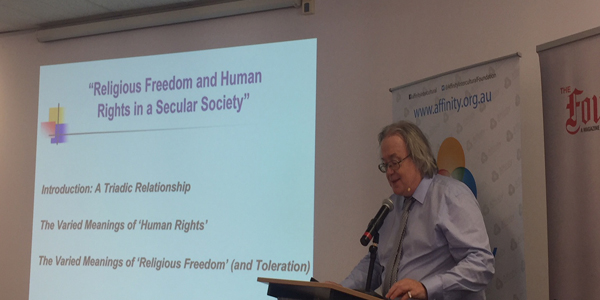 Australia should adopt a religious freedom act, the audience for the latest Affinity Lunchtime lecture has heard.

The event was facilitated by Notre Dame University’s Iain Benson, who recently wrote the ABC Opinion piece ‘Who Should be Forced to Contribute to the Celebration of a Marriage?’

Professor Benson previously appeared in front of the Ruddock review and argued in favour of Australia adopting a federal Religious Freedom Act. Australia does not currently have such a law.

Professor Benson told the audience that an upcoming Canadian court case determining whether or not Trinity Western University could have an accredited law school was a matter of concern.

“I personally avoid the language of tolerance,” Professor Weller said during a Q and A session that followed his lecture.

While not wanting to advocate intolerance, he said that there were better ways to embrace groups from other faith backgrounds than this particular language.

Professor Weller further explained that there were three different understandings of the separation of church and state. This included the predominantly American understanding where the separation of church from the powers of the state is accompanied by a general religiosity where people make public appeals to “God language” (such as in the pledge of allegiance and on money).

Secularism, Professor Weller argued, is a broad and often ill-defined term, with different interpretations and applications to law. This, he believes, also leads to the assumption that secularism is a ‘neutral’ form of governance.

Former Uniting Church Moderator Jim Mien introduced the event. He has been involved with Affinity since 2006.

The Lunchtime Lectures are the initiative of the Affinity Intercultural Foundation, formed by a group of young Muslim Australians in 2000. Other speakers in this series have included former Australian Foreign Minister Bob Carr and Professor Gary Bouma.

For more on Affinity’s Lunchtime Lecture series, visit their website.