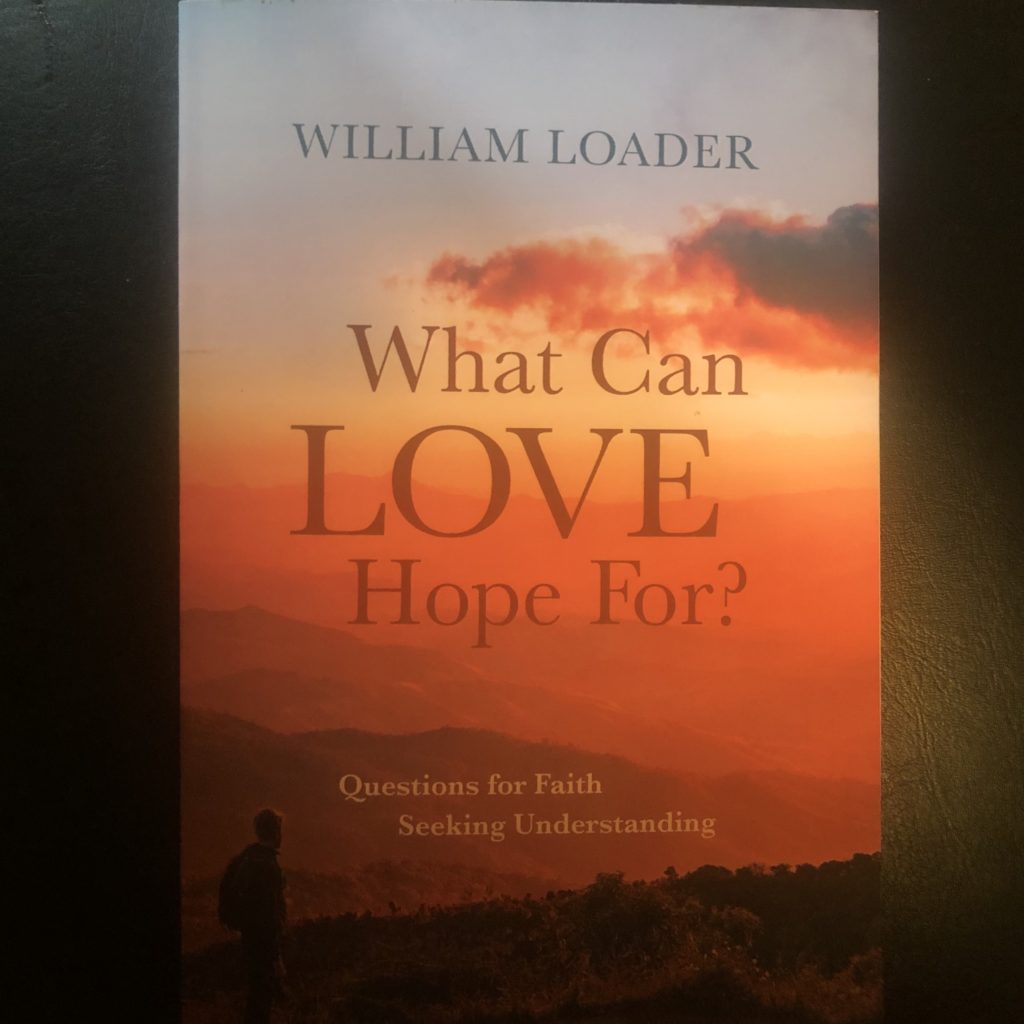 Review: What can love hope for?

Bill Loader is widely-known, much-consulted, and greatly loved across the Uniting Church. He has had a fine career as a leading biblical scholar, teaching for decades at Murdoch University and publishing prolifically with prestigious international publishers.

This academic career has sat alongside an active involvement in the Uniting Church, preaching in local Congregations, teaching regular sessions with lay leaders, and forming ministers and deacons for their ministries.

His website, with its scholarly yet accessible discussions of lectionary texts, attracts regular readership, not only from Uniting Church people, but from preachers right around the world.

Out of this wealth of experience comes this slim but rich offering: ten succinct chapters (most only ten to twelve pages long) on topics of key theological import: the significance of Jesus, the good news for the poor, how to understand the cross, the place of other faiths, God’s wrath and God’s justice, the place of the Law, miracles and faith, God and love, and, of course, marriage and sexuality. All in 110 pages.

Each chapter ends with a focused “question for reflection”, to encourage ongoing consideration of the topic at hand. The book itself ends with a bonus afterword, setting out Bill’s personal journey “from fundamentalism to fundamentals”. The afterword concludes, “we all walk with some grit in our shoes in religious and cultural contexts where its awareness is possible even if, by and large, its removal is not” (p.130).

Loader seeks to work with the irritants provided by this “grit” in a constructive and hope-filled way, to indicate how, in the midst of contentious discussions, people of faith are able to discern “what brings life and health.” In Chapter five, whose title also provides the title of the book, he concludes that we ought “to be a just and caring society that is inclusive and to care for the world and its future inhabitants” (p.46).

It’s no surprise that the enduringly contentious issue of marriage and sexuality is addressed (in chapter 10, the longest chapter). Bill Loader has made many contributions to the long-running discussions of these matters: leading workshops and producing resources pitched at a popular level, undergirded especially by the academic research and writing undertaken during his five years as a professorial fellow with Australian Research Council funding.
This chapter makes clear the two key pillars of his well-considered views: one, that Paul reflects the common first century belief that “all people are heterosexual”, so anyone identifying as homosexual is “in an unnatural state of being as a result of sin” (p.111); and two, that in some circumstances “it is not appropriate, indeed it is irresponsible, to apply what Paul says” to contemporary situations (also p.111).

Thus, Loader affirms that “the Bible does not tell it all on these matters any more than it did on matters of women and divorce” (p.112). Such honesty about matters hermeneutical is to be commended. As is the case in each chapter, the reader is invited to give serious personal consideration to how biblical passages are to be brought into engagement with contemporary situations and considerations.

But the book is not just about marriage and sexuality. There is much more that is explored in its pages.

Chapter  five (whose title, as we have noted, provides the title for the whole book) begins with a further observation about the process of interpretation: “There is a 2,000-year gap between believers in today’s twenty-first-century world and those of the first century,” such that “to engage the writings of the New Testament is to engage in a cross-cultural encounter with all the respect and opportunity for learning and enrichment which that entails” (p.35).

Starting with the fact that New Testament texts expect a return of Jesus within the lifetime of those then alive, the chapter canvasses the eschatological vision of the kingdom, various parables of Jesus, the function of the risen Jesus, and the resurrection body, leading to the conclusion that we, today, are to “reconfigure our approach to hope, retaining the central [first century] substance, but not their notions of timing and manner of its achievement” (p.45).

In this way, Loader models the task of the interpreter, be they preacher, Bible study leader, scholar, or individual disciple. Immersion into the culture, customs, languages, perspectives of the ancient texts is as important as thoughtful, reflective consideration of what is heard and seen in the text, in the light of contemporary understandings, insights, and perspectives. (Somewhat like what paragraphs 5 and 11 of the UCA Basis of Union affirms.)

There is much more to be said about this delightful book; but only one comment needs to be made here. This is a book worth buying, reading, studying (alone or with others), and engaging with wholeheartedly.