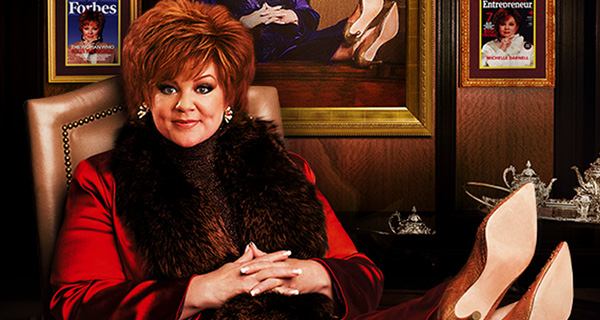 Did you see the trailer for The Boss, the latest comedy starring Bridesmaids and Spy leading lady Melissa McCarthy? If you did, you probably held little hope for the movie itself, given the trailer’s quota of “comedy” was relegated to unfunny stuff such as girl scouts fighting, children drinking bourbon, and jokes about broken pelvises. Oh, Melissa, you are running the risk of becoming a female Adam Sandler.

The Boss opens with a short montage that travels from the ’70s through to the ’90s, showing the difficult life that has shaped and moulded Michelle Darnell (Melissa McCarthy). She may be damaged because of her past rejections, but it seems to have made her into a driven business woman who is sceptical of the nuclear family. Having grown up in an orphanage, she scratches and fights her way to the top of the corporate ladder. In the process of all that, she turns into a narcissistic megalomaniac and comes to believe she is impervious to the law. This arrogance leads to her arrest for insider trading and an eventual stay in prison. During her four-month incarceration, Michelle manages to lose all of her corporate empire. She is left penniless and desperate for help. After her release from prison, she searches for anyone willing to assist her. A lifeline shows up in the form of her former secretary, Claire (Kristen Bell). With the help of this single mother and her daughter, Michelle throws herself back into the business game. The only things standing in her way are her own personal weaknesses, and enemies who do not want to see her back on top.

As I watched each decade introduced in the opening montage, it brought about different memories of years gone by — especially of the quality of comedies from those decades. Sadly, director Ben Falcone (Tammy) seems to have channelled some of the worst comedies of the 1980s to concoct The Boss. He provides a fantastic opening for McCarthy to portray business mogul Michelle as an inspirational speaker. Her dance routine (Yes, she has a dance routine) and speech were spot-on about what is celebrated in this age of materialism. A whisper of promise for The Boss emerges at this early point. The problem is, though, this scene proves to be one of the only humorous moments. What unfolds is Falcone’s reliance upon McCarthy’s improvisation skills to come up with dialogue along the way. This writing style leaves the rest of the cast to merely stand around gap-mouthed and confused, which becomes tiresome and boring.

What scriptwriting there is behind The Boss is actually where the weaknesses are greatly exposed. The central plot hook is the beginning of problems. Michelle Darnell’s dramatic fall from grace is needed for the sake of the overall storyline, but proves to be exceptionally unrealistic. How is it that she is brilliant enough to rise to the level of success she does but, during the four months she is in jail, she becomes completely oblivious to her empire crumbling? This seems to go against her character and doesn’t foster any credibility. Another blindspot is the naivety of Claire to allow Michelle to come back into her life, after how Michelle treated her. Plus, Claire allows Michelle to influence her daughter. What?  The influence of Claire’s former boss upon her daughter is repulsive and goes against the character of Bell’s role as a loving mother. Then, to take the level of bad taste across the line, Michelle’s primary vehicle for rising out of the ashes is foul-mouthed girl-scout-like children. Ahem.

Falcone does attempt to insert endearing moments but, like the majority of the comedy, it never quite reaches its goal.

The Boss will not be known for its original script or brilliant comedic timing, but it should be remembered for Falcone’s inability to capitalise on excellent acting talent. Peter Dinklage (Game of Thrones) and Kristen Bell (Frozen) are relegated to setting up McCarthy’s jokes. Emmy Award-winning Margo Martingale (The Americans) and Academy Award winner Kathy Bates (Misery) are left with brief cameos that fail to utilise their talents. Yet, the most egregious waste of talent is McCarthy herself. She has proven to be a force of comedic and dramatic talents during the past few years. But this cinematic venture does not capitalise on any of her abilities, apart from her physical comedy and capacity to lay down a foul-mouthed diatribe.

Unfortunately, The Boss moves her dangerously close to the Adam Sandler category of film-making: comedians who become lazy in production value and rely heavily on prat falls and toilet humour. The Boss is an unfortunate waste of McCarthy’s abilities and leaves this film with little to celebrate or recommend.

After the first few minutes of this film, it was evident that the McCarthy/Falcone combination has few original ideas. For all of those who go along to The Boss, the joke is on you.

Who created comedy? Would it shock you to think that God created humour? In the opening of the Bible, God creates mankind in his own image. Mankind in its complete form — with the ability to cry, work, love and even laugh. Also, look deeper into some of the great narrative portions of the Bible and it will become evident that God has an exceptional sense of humour and is the one that should be credited with the gift of laughter.