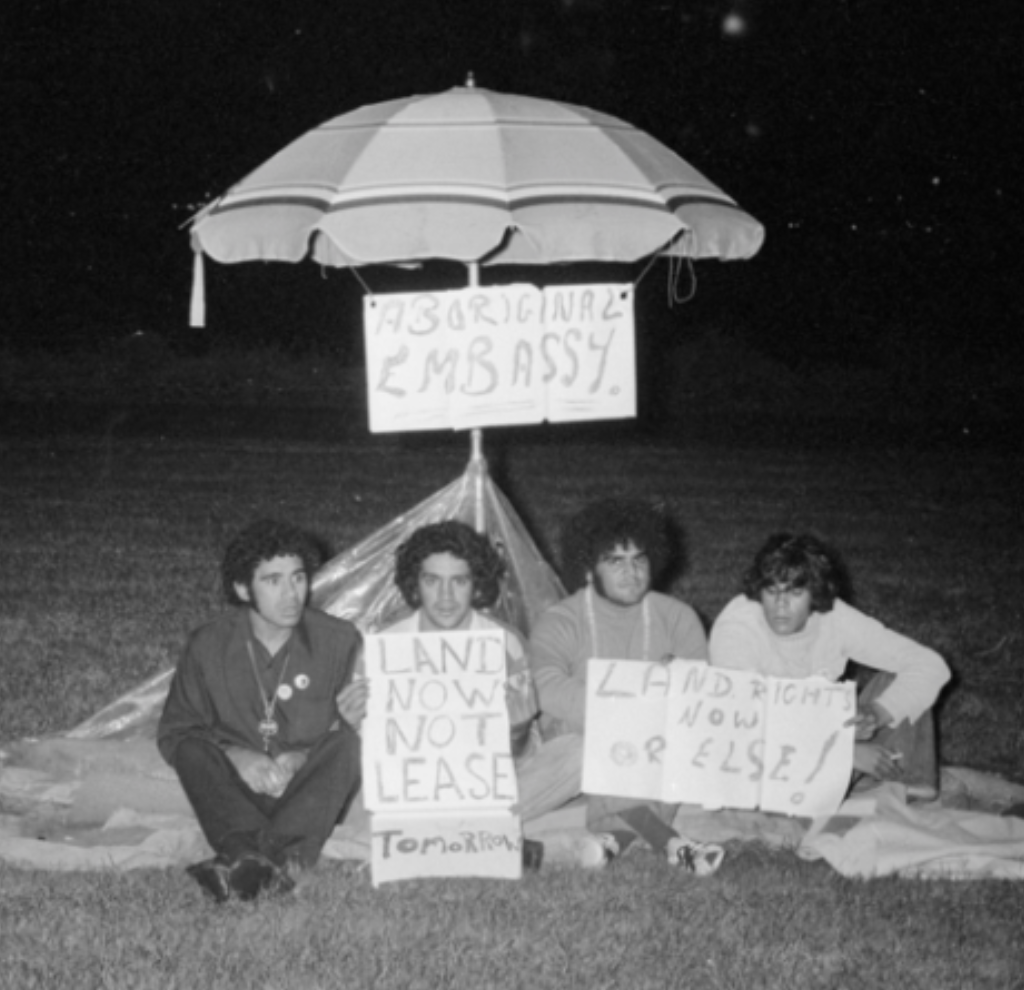 On 26 January 1972, four Aboriginal men—Billie Craigie, Michael Anderson, Bertie Williams, and Tony Coorey—set up a beach umbrella on the lawns opposite the Parliament House in Canberra. The men were protesting the resistance that the conservative Liberal-Country Party federal government were exhibiting towards granting land rights to Aboriginal people.

Even though Aboriginal people had lived on the land of the continent of Australia for millennia, they had no rights to land in most places across the continent. The British Invasion of Port Jackson in 1788, some years after Lt James Cook had imperiously claimed the land of New Holland for the British Crown in 1770, led to expanding colonisation of the land over the ensuing decades. Each new colonial settlement was associated with battles between the local indigenous people and the invading British. Massacres resulted in almost every location.

The men sitting under the umbrella in Canberra in 1972 described it as the Aboriginal Embassy, alluding to the fact that the city of Canberra was home to scores of embassies from the governments of overseas nations. Indeed, the city had been established early in the 20th century with the guarantee that those nations could have a piece of territory in the new capital city where their diplomatic staff could live and work.

By the late 1970s, seventy nations had embassies in Canberra, but there was no formal channel for relationships with the First Peoples of Australia. Somewhere around 400 groupings of Aboriginal people were believed to have lived across the continent and on the surrounding islands, including the Torres Strait Islands, with at least 250 languages being spoken.

But decades of British colonisation had seen the indigenous people marginalised from “mainstream” white Australian society. Numbers declined, living conditions deteriorated, especially in towns and cities, and racist attitudes towards “the blacks” predominated. Of those 250 languages, less than a half had continued into the 20th century, and many of those continuing languages were in peril of dying out completely.

The Prime Minister of the day (and arguably one of Australia’s worst leaders), William McMahon, and his conservative government colleagues exemplified the cultural arrogance and racism that held sway across the nation at that time. The National Museum of Australia reports that “On the eve of Australia Day 1972, the McMahon government announced the implementation of a new system that rejected granting independent ownership of traditional land to Indigenous people in favour of 50-year general purpose leases for Indigenous communities, provided they could demonstrate a social and economic use for the land and excluding any mineral and forest rights.

“After the ongoing disappointments of the land rights struggle, this announcement sparked action among many Indigenous groups and directly contributed to the founding of the Tent Embassy.” The time was ripe for Aboriginal leaders to step up and speak out on behalf of their peoples.

The initial demands of the group which established the Tent Embassy read today as a sensible set of actions which, although achieved in part, are sadly yet to be completely fulfilled. Those demands included:

The Embassy has been maintained continuously since 1972 by First People leaders, and this month the 50th anniversary is being celebrated. (The recent incident at the front of Old Parliament House was not associated in any way with the Tent Embassy, nor with any responsible Aboriginal leadership.)

Professor Bronwyn Carlson, Director of The Centre for Global Indigenous Futures, Macquarie University, writes that “Nowhere else in the world have we seen such longevity around a site of protest. The Aboriginal Tent Embassy is an impressive achievement that demonstrates the tenacity of Aboriginal and Torres Strait Islander people and our continued fight for the reclamation of our lands and sovereign rights as First Nations peoples.”