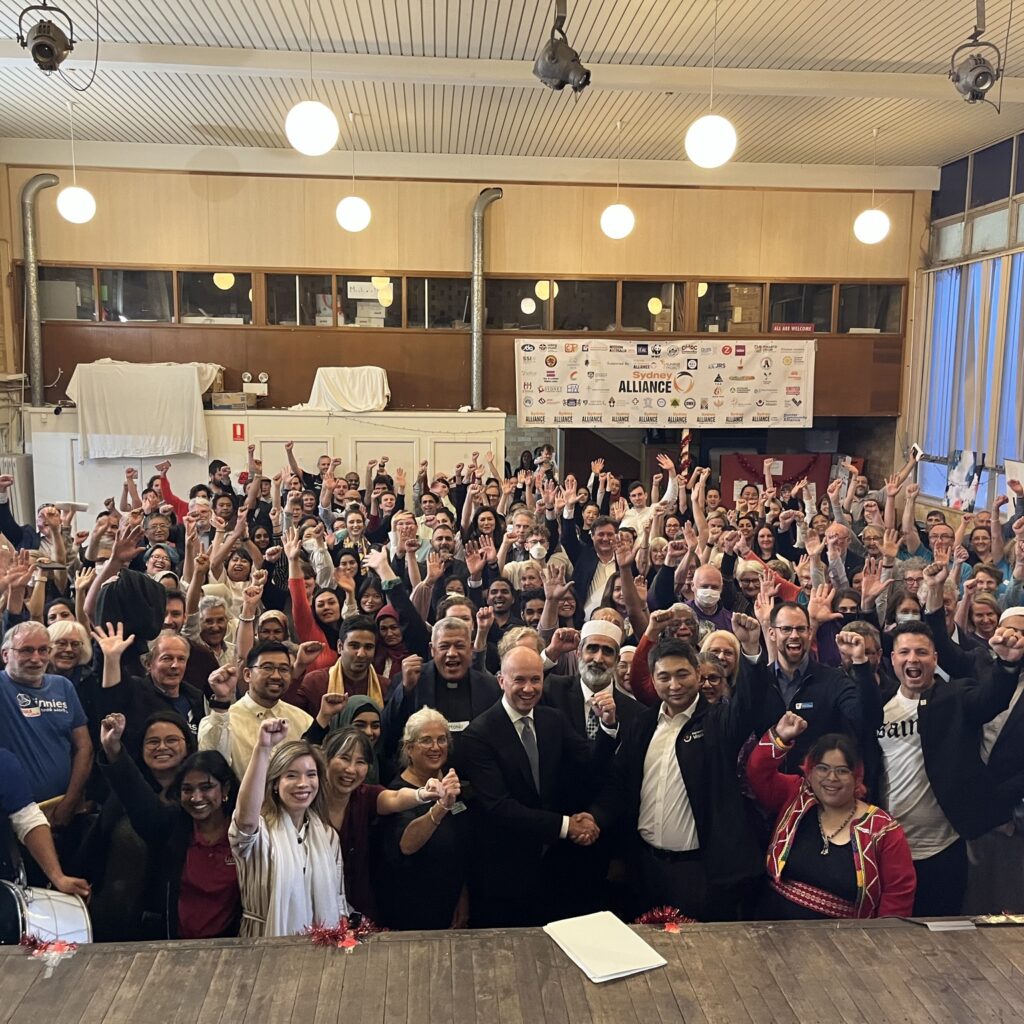 About 200 representatives from a wide range of organisations met with NSW Treasuer and Energy Minister Matt Kean in Parramatta on Wednesday, 30 November.

The Sydney Alliance members used the meeting  to call on the NSW government to tackle the soaring cost of energy.

As part of the diverse coalition that makes up the Sydney Alliance, church, mosque and temple leaders, union, charity and not-for-profit representatives, researchers, and other community members from across Sydney met with Mr. Kean at Parramatta Mission, where they asked him to commit to measures that would curb surging power bills.

Deepthi Mathew is Social Justice Advocate for Uniting and one of the assembly’s organisers. She said those who were most affected by extreme weather and energy costs usually couldn’t access cheap energy such as solar.

“Rising energy bills and cost of living are a result of climate change, and people of modest means bear the brunt of these high costs,” she said.

“The government can and should act on these concerns, particularly if they want to be re-elected in March.”

Dr Caroline Valente, Senior Policy Associate at Energy Consumers Australia, told the assembly that three quarters of existing homes have an energy efficiency rating below three out of 10 stars.

“That’s three quarters of homes that are so inefficient that they become unsafe during a heatwave or a cold snap,” she said. “By 2050, we expect higher average temperatures, hotter days, and longer heatwaves. If our inefficient homes are dangerous now, they could become the next serial killers in the near future.

The assembly’s co-chairs asked Mr. Kean to reconfirm the government’s commitment to minimum energy efficiency standards for rentals, if they would support households transition from gas to more efficient home appliances, and if they would consider an energy hub to help communities access government schemes and get the best energy deals.

The co-chairs also asked Mr. Kean to commit to attending another Sydney Alliance assembly of 800 community members ahead of the state election.

The NSW Treasurer and Energy Minister said the government remained committed to energy efficiency upgrades for homes and that he would come back to an assembly in March with the government’s position on an energy hub and support for households to transition away from gas.

“If we are going to get to net zero then household gas is not going to be the answer, particularly for new builds,” Mr. Kean said. “We are currently working out what our policy is going to be… We will come back to the Alliance.”

PrevPreviousBiblical Symbolism in The Batman (2022)
NextA Bridge Over Troubled WaterNext