Pixar takes on the afterlife 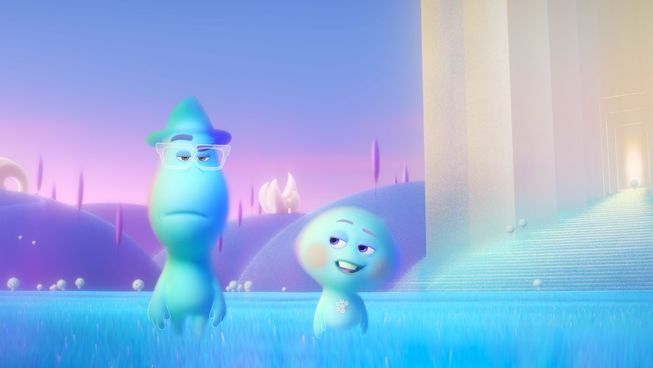 One thing that can be said about Pixar is that they are willing to take on any theme and premise to see how they can work their animated magic on the topic. From the world of aging in UP to the dystopian world of WALL-E, the animation powerhouse has proven that it can rise to the challenge of addressing many of life’s bigger questions. Soul is the latest from director Peter Doctor, the Academy Award-winner for Inside Out and Up, who goes to the next level by considering that existential pondering of what makes you… you?

A project that proves to be one for the parents more than the kids as he takes Joe Gardner (voiced by Jamie Foxx), on a journey to the ‘far beyond.’ This middle-school band instructor does all that he can to invest in his students and yearns to see them gain his love for music. On the day that he is offered a full-time role at his local New York City school, the accomplished jazz pianist gets the call of a lifetime. World-renowned saxophonist Dorothea Williams (voiced by Angela Bassett) is looking for a new person to play in her jazz quartet and Joe is asked to audition. Even though he is nervous, the jazz aficionado proves that he has the skills on the keys and gets the gig. This causes the teacher to walk home in a euphoric state, then accidentally fall down an open manhole, only to find himself on the slow conveyor belt to the hereafter.

Not wanting to see the end of his life on earth and to make his musical destiny, Joe jumps off the bridge to heaven. This leads him to leave behind the move towards the afterlife and his spirit finds itself in The Great Before. An otherworldly place where souls get their beginning before being sent to earth. Each burgeoning life is provided with their predestined personalities, passions and ‘the spark’ that may guide them to their purpose in the world. Joe subtly moves in to fill the mentor’s role for one of the more precocious souls, 22 (voiced by Tina Fey). As he tries to direct her to her future destination, he works to find the pathway back to New York so that he can fulfil his life’s dream of performing jazz on stage.

In 1940, Disney studios released Fantasia, a mature and artistic digression from their standard fairy-tale narratives. Bringing together groundbreaking animation for that period in time with many of the greatest musical compilations in history, leading it to becoming one of the most misunderstood films in the Disney filmography, but one that is now considered a cinematic masterpiece. Similarly, Soul will need to prove where it stands in movie folklore. Still, one thing that it shares with its historical predecessor is the intended audience and its artistry. Peter Doctor’s film is brilliant, beautiful, staggeringly mind-bending and designed for mature viewers.

By taking on some of the most prominent philosophical and theological queries of life, Pixar continues to raise the bar of animation production. The multiple worlds built will draw audiences into this whimsical journey between the physical and the spiritual realms which will provide fans with the visual expectations that have become synonymous with the studio. To go beyond the animation and the stellar voice cast, the discussions that will come from this film will last for many days to follow. With whispers of past films that took on these topics like Heaven Can Wait and Defending Your Life. The screenplay delves deep into the questions that many desire to know and some would prefer to avoid. What happens after you die? What would you do if you died tomorrow? If you knew you were going to die tomorrow, what would you do today? What would life be like to walk in another man’s shoes? A series of questions not answered directly by the film, but will push audiences to search for satisfactory answers.

Pixar manages to provide an imaginative expression of the existence before and after life on earth. Mixing together various religious beliefs with a dash of humour to make the journey palatable, but it does prove to be perplexing. It leaves viewers with a message that will cause many theologians to dismiss or even discourage people from seeing this project, but this would be unfortunate. Why? Primarily because the one thing that this film causes is an underlying wanting, a desire to know more about the characters and subject matter. Outside of the proverbial acknowledgement of the need to appreciate each day of life, Soul leaves the door wide open for discussions on an eternal scale.

Soul streams on Disney Plus from Christmas Day.