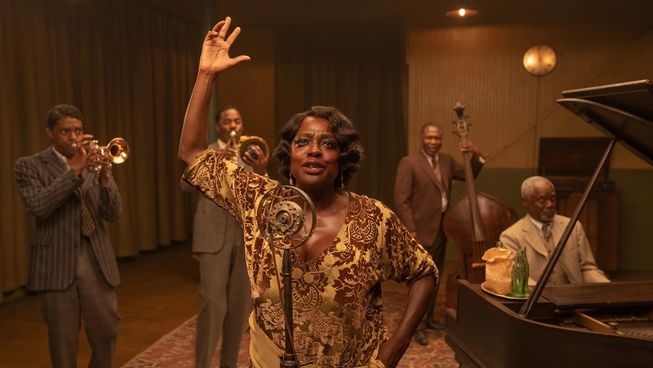 After Denzel Washington finished the powerful cinematic retelling of August Wilson’s play, Fences, the famed Hollywood power broker looked to get all of the playwright’s works to film. Initially slated for a 10 picture deal with HBO, this multi-picture deal was eventually moved over to Netflix. Ma Rainey’s Black Bottom became the first film in this series. With Viola Davis coming off her Academy Award-winning role in Fences and what would come to be Chadwick Boseman’s (Black Panther) final performance.

In this film set in the 1920s, August Wilson mixes reality with fiction by focusing on the true-to-life dynamic and divisive “Mother of the Blues,” Ma Rainey (Davis). He shows off her unique vocal talents while giving a behind-the-scenes look into one of her recording sessions of her signature song, Black Bottom. She proved to be the equivalent of the pop star diva in early 1900s with extreme demands, unexcused tardiness and a fierce tenacity that pushed everything her way every time. Locked into a battle of wills with her white manager, Irvin (Jeremy Shamos), at the recording site, things begin to boil over on a hot summer’s day in the Windy City.

Adding to the mix of this fiery recording gig were the tensions between the band members that eventually spill over into the studio. Ma’s regular band knows the routine and ensures that they are ready for everything the day will bring. Except for an ambitious and arrogant trumpeter named Levee Green (Boseman), who wants to introduce his own sound into the familiar blues repertoire. Initially, his personality and passion add a bit of spice to the mix. Yet, pride eventually takes over as temperatures rise during the session. Artistic differences that prove to be too hot for this small band and lead to tempers getting the better of everyone involved.

For fans of August Wilson and the blues, this film will have you melting into the floor with passion for this hard-hitting and gravelly-voiced recording session. Davis and Boseman take command of every scene they are in, climaxing with an inevitable perfect storm of music and personalities. Both actors prove that they are a tour de force to be reckoned with and perfectly cast for these titular roles. It will be no surprise if both get nods during awards season.

But unlike Fences, which transitioned to the big screen seamlessly, Black Bottom holds onto the look and feel of a stage production. It shows it is difficult to transition between these two production styles, but is it completely necessary? Not that this element detracts from the power of the story or the performances. It merely takes a moment to adjust to this divergent viewing experience. Director George C. Wolfe manages to frame each scene with the express purpose of combustibility. Leading each act to deliver a potent punch that rarely allows the audience to recover before the next is given.

Even though the events themselves are fictitious, this project allows audiences to be introduced to one of music’s legends. Despite Ma’s less than appealing personality, it is undeniable that her sound and influence still reverberate through music history’s hallways, while also spotlighting how black artists were sidelined and maligned throughout the years. Simultaneously, showcasing one of America’s greatest playwrights and whetting the appetite for the next film based on his work.

Reel Dialogue: Why do we have to suffer?

One of the most confronting and powerful scenes of the film comes at the hands of Boseman’s character, Levee Green. As he reflects on a horrific family experience, the trumpeter explains how this was a pivotal moment in his life. This life-changing moment made him consider the existence and the need for God, but ultimately leads him to reject God altogether.

A choice that many make, but for those still pondering suffering and how this affects your view on the existence of God, it might be surprising, but Christianity is the only worldview that has an actual answer to the problem of evil and suffering. Christians can attest that they serve a God who lived as a man on this earth and experienced temptation, torture, hunger, thirst, hatred and death.

Due to the work of Jesus on the cross, God’s justice is manifested in his son. The cross is a means of symbolising how much God cares about humanity’s suffering. A more profound conclusion is that we may never know the specific reason for our suffering, but that we can identify the God who understands the rationale behind the pain.

‘And the God of all grace, who called you to his eternal glory in Christ, after you have suffered a little while, will himself restore you and make you strong, firm and steadfast.’ 1 Peter 5:10

PrevPreviousHow do we explain family tragedies?
NextPixar takes on the afterlifeNext