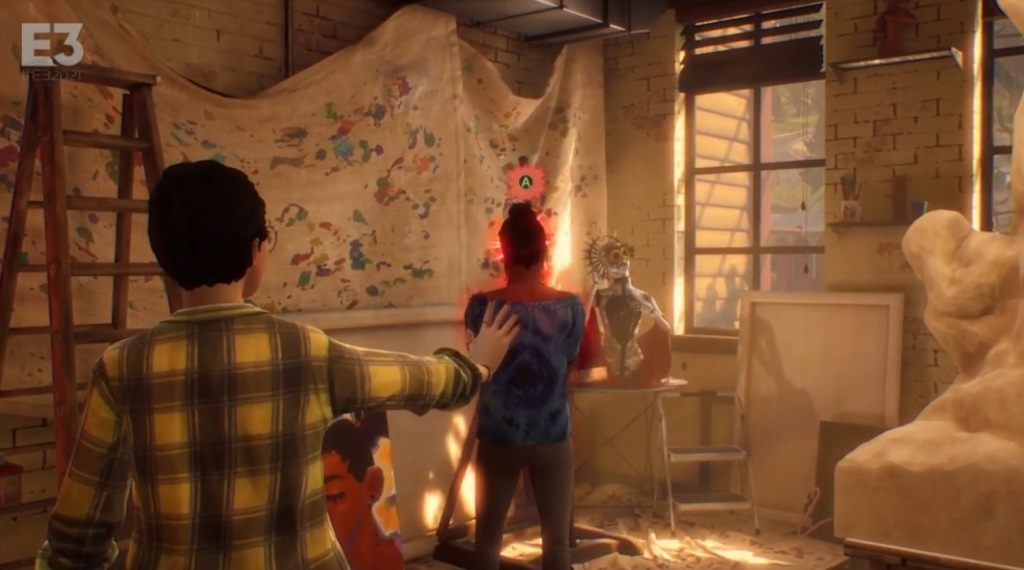 True Colors, the fourth game in the Life is Strange series, continues the franchise’s track record of comfortable narrative-focused games that couple some heady themes with a strong dose of youthful angst. This entry’s protagonist is Alex Chen, a young woman who has left behind her life in a group home to start over in Haven Springs, the tiny mountain town where her long-lost brother, Gabe, has settled down. But Alex has a secret: she can read minds, feel other people’s feelings, and even experience those emotions directly herself.

Warren Spector, the celebrated director of 2000 PC game Deus Ex, has long said that he’d love to make a game set across a single extremely detailed city block, one so hyper-focused on a single location that it could be fully realised and properly fleshed out. Life is Strange: True Colors isn’t quite that, but it is set almost entirely across a thin slice of Haven Springs, rarely straying from the one street where Alex lives in an apartment above the local tavern. This level of focus makes Haven Springs, and the characters within it, feel all the more real.

Most of the gameplay comes down to exploration and making choices in dialogue – deciding how you answer questions and talk to characters will change the relationships you form and how the story plays out. This is a game about, more than anything else, how difficult it can be to keep your emotions in check. It’s about learning to live with your anger; being controlled by your fears; the cost of hiding your sadness from the people around you. The small-town setting allows the game to explore the fallout of emotional turmoil on a sensible scale: everyone in this town feels connected in a way that means if Alex helps one person, she’s helping all of them.

The overarching plot of Life is Strange: True Colors ends up not amounting to a whole lot: aside from a few decent twists near the end, its tale of corporate maleficence is fairly predictable. But what’s more important is the game’s cast of characters, who are well-written, interesting, and (in many cases) very likeable. Alex is a tremendous protagonist: she’s witty, smart, and thoughtful, and depending on the choices the player makes, she can also be varying degrees of flirty, compassionate, and funny. She’s also canonically queer, and this side of her life is celebrated beautifully. She’s one of the best characters the series has crafted.

The rest of the cast is equally fleshed out, too, and while previous Life is Strange games have occasionally fallen back on stock archetypes or underdeveloped figures, True Colors puts effort into making every character feel real and complicated. The cast is a diverse mix of folks, ranging in age, gender, sexuality, and race, which helps to paint Haven Springs as a welcoming, open community for the player to spend time in – and this means that the emotional turmoil at the game’s heart feels real and diverse, too. The motion-captured performances lend a sense of authenticity, so even though the game’s pacing asks you to buy into Alex developing very close friendships extremely quickly, it’s easy to understand why these characters all like each other so much.

For all its qualities, True Colors feels, at times, like it is biting off more than it can chew, leading to a finale that comes earlier than expected and lands awkwardly. This is a short game, and while there’s nothing inherently wrong with that, some ongoing plot threads end abruptly. As much as Haven Springs is talked up by its residents, some design restraints leave the town feeling doomed in ways that do not seem intentional. So many businesses on the street you can access are unoccupied or closed, and the invisible walls that prevent you from exploring much beyond a single block are an inelegant solution to a complex problem (I’m very curious about a distant business you can see at the edge of town called “SPAMPS”, but there’s sadly no way of visiting it). The areas you can explore and brilliantly detailed and vibrant, but at times you can see, very clearly, the gap between some of the team’s ambitions and what they could reasonably make within the time frame and budget available to them.

But I’d rather celebrate Life is Strange: True Colors for what it is than consider what it is not for too long. Your choices in True Colors matter not just because they change the ending you get, but because the characters they impact matter, too. As the game’s title says, life is, indeed, strange – but True Colors reminds us that it can also be beautiful and ugly, sad and joyous, horrifying, and uplifting, and sometimes it can be all of these at once.

Life is Strange: True Colors is available now on PC, PlayStation 4/5, and Xbox One/Series S/Series X. It will come to Nintendo Switch at a later date.