What happens when your life experience becomes the basis for a movie? Atheist-turned-Christian Lee Strobel is the former award-winning legal editor of The Chicago Tribune and best-selling author of more than twenty books. His classic, The Case for Christ, is a perennial favourite which details his conversion to Christianity and is now the subject of a film, out in cinemas in limited release in Australia from 4th of May. Lee Strobel discusses what it was like seeing his life play out on a big screen and what Christianity looks like in a post-truth world.

“I never thought I would write a book about it much less a movie,” answers Strobel about turning the pivotal point of his life into our entertainment. “My wife was the one who suggested I write a book.”

When they got the call from PureFlix, the company that went on to produce the film, the Strobels would only agree if the screenplay was written by Brian Bird.

“Brian Bird is a friend of ours and a great screenwriter-we knew he would treat our story with honesty and integrity,” reveals Strobel.

With Brain on board the film slowly came together but that didn’t make it easier watching their lives on screen. Especially as Strobel points out, much of their life particularly his behaviour before converting to Christianity was not something they are proud of, let alone air it out for the world to see.

“It is a little uncomfortable to have our private arguments on a big screen; the way I lived, and so forth; as well as my drinking portrayed in a motion picture,” admits Strobel.

But with the film based on authenticity, the Strobels felt they couldn’t paint half the picture.  For the Strobels, to get the message out about the truth of Christ and God was worth the embarrassment.

Leslie and I chat with the movie me, actor Mike Vogel, on set of #TheCaseforChristMovie, which wraps tomorrow. pic.twitter.com/OYHxcYeGyP

Despite this, Strobel was sceptical about how the book could be turned into a movie. The book itself is an interview with 13 scholars on various aspects of the evidence for Jesus. But the vision for this film was to tell a fuller story, to tell the personal story. To tell a story about Strobel’s marriage and to tell a love story, a detective story, a father/son story and a big city newspaper story, as well as a story of spiritual discovery.

“By broadening it, to tell the personal side, it made it a much more compelling film,” says Strobel.

On the question of whether or not dropping “Christ” from the title of the film for it to reach a broader audience, Strobel was clear that because the book had sold many millions of copies, the production company PureFlix wanted to capitalize on this.

“I agree that there are not a lot of unbelievers who are going to come to a film called The Case for Christ. It’s too in your face but, you know what? The same is true of the book and yet we have had thousands come to faith through it.”

Strobel found that many Christians who had read his book would then pass it on to someone ‘who hasn’t met Jesus yet’ and through reading would start a discussion between them.

“I think the same is happening with this movie.

“They are getting excited by it and they are thinking of three or four people … who are spiritually confused or curious, and they are calling them up saying, ‘hey, I want to see this movie a second time and why don’t you come with me?’”

Strobel says it is that ‘relational pull’ that will help get people in to see the film. 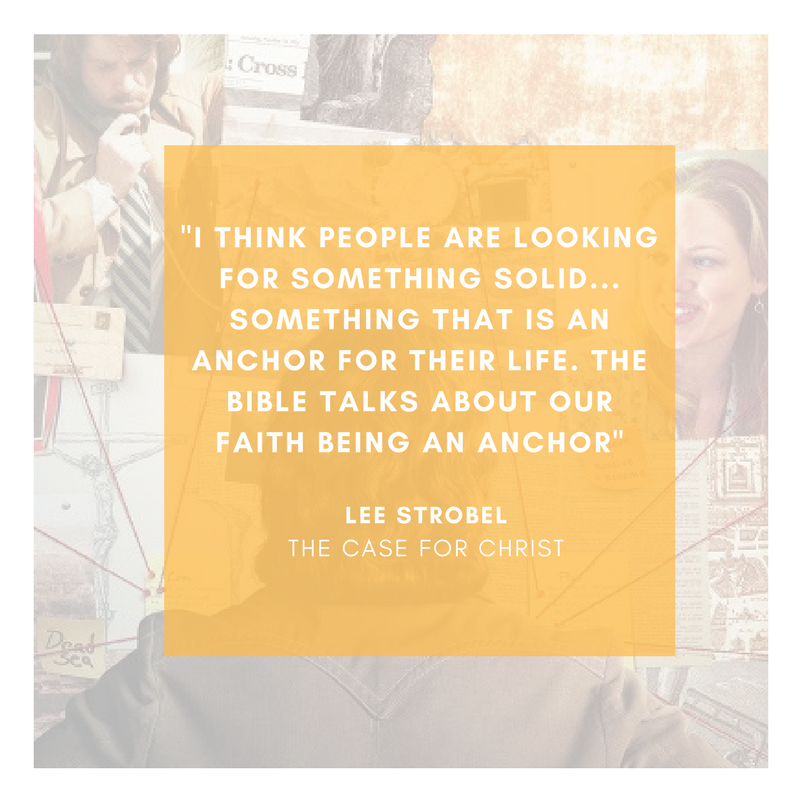 With the book and film centered on seeking the ‘truth’, this real-life discovery becomes even more pertinent in a world where post-truth and ‘alternative facts’ occupy conversations in the western world.

When it appears the world is not looking for truth, how do apologetics especially, address this? Strobel believes that it is because of this post truth era that more than ever, people are looking for an anchor on which to build their lives.

“The Bible talks about our faith being an anchor.

“Ultimately, you can’t really sustain an approach to life built on no facts or evidence, on not being able to trust what is truth and what isn’t,” says Strobel.

Strobel thinks people are still searching for the truth and for some it’s not just a want but a need.

“Fortunately, Jesus said ‘I am the truth. I am the way. I am the life,'” says Strobel before adding, “I think it’s going to benefit the church ultimately.”

For Strobel this book and film is a way to reach those who are ‘spiritually curious’ or non-believers and also give fellow Christians a way to lovingly help their friends recognise that they are seeking the truth.

“That’s why I do what I do: I write books and we create films so that people who are Christians can think of half a dozen people in their lives who need the truth, who need Jesus, and they can say, ‘let me invite you to this film. Let me give you this book and then let’s have a discussion. I don’t have all the answers and I never will but, you know what, we don’t have to know everything to know something,’” says Strobel.

Strobel’s fact-finding journey transformed him from a non-believer and hard line skeptic to the point where he can say with confidence that Jesus is the Son of God who rose from the dead.

For Strobel it is important the film connects not only on an intellectual level, ‘but also on a personal, emotional and experiential level.’

This is because as Strobel explains, that for him finding the truth of Christianity based in the evidence of the resurrection wasn’t the final step.

“I believe today because I’ve met Jesus. I’ve known him for these 35 years. We have a relationship and you couldn’t convince me that he doesn’t exist, at this point,” says Strobel.

The Case of Christ is in cinemas now.