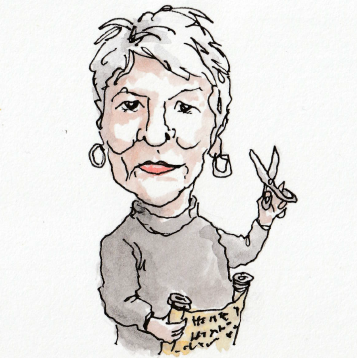 Reviews: Veritas: A Harvard Professor, a Con Man and the Gospel of Jesus’s Wife by Ariel Sabar | The Book of Longings by Sue Monk Kidd

It may be surprising, but we don’t really know if Jesus was married. Like many other things, it’s simply not mentioned in the gospels. It would be unusual for a man of his age, and a rabbi, not to be. Then again, Israel’s prophets often gave up a ‘normal’ lifestyle, including marriage, as part of their calling. But the idea of Jesus having a wife appeals to some – novelists, those who think women were written out of the church’s story and those who think, like Dan Brown, the church is in the habit of keeping secrets.

In the Gnostic gospels women often have a more privileged place, with status equal to the male disciples. Gnostic scholar Karen King is head of Harvard’s divinity school, and a member of the Jesus Seminar, whose stated mission was to shake Christians’ picture of Jesus. In 2012 she announced she had discovered (or was given) a fragment of ancient papyrus that held text from a Gnostic gospel in which Jesus was quoted as saying ‘my wife’, an obviously provocative discovery, if the papyrus was authentic. (Scholars, though, pointed out that, since the text immediately after these words was missing, it could have read, ‘my wife…? I don’t need one’ or ‘my wife the church…’)

‘Veritas’ (truth) is Harvard’s motto, and Ariel Sabar tells of the hunt to find out if the papyrus was a fake, if Jesus having a wife might be the truth. The fact that we know now that the papyrus was fake doesn’t lessen the gripping nature of the story. It’s like a true-crime thriller, and Sabar is a canny and dogged detective.

King acquired the fragment from a German residing in Florida, Walter Fritz, a dodgy if intriguing character – a possible victim of clergy abuse, a failed and disgruntled Egyptology scholar, painter, amateur pornographer, and art dealer. Sabar, who played a part in originally revealing the fragment to be a forgery, retells how he tracked down Fritz, who proves to be slippery but also like those murderers on TV shows who just can’t help but tell the detectives how clever they are.

Sabar is attuned to the wider issues of power, prestige, and personality that make someone like King susceptible to a con like this. King, for her part, in an irony, hoped scripture would confirm her assumptions (as I suppose we all do). Although eventually acknowledging the forgery, she seems to have wished very much for the fragment to be real, due to her belief that the Gnostic gospels tell us something more real about early Christianity, that the church’s later imposition of uniform belief is far from the ‘wilderness’ of the early church, and that the Gnostic gospels are indicative of the challenging, radical nature of early Christianity, that the early church followed Jesus in his egalitarian radicalism.

In Sue Monk Kidd’s novel, Jesus is radical in the sense of wanting to bring in a new kingdom by love and selflessness, very much like the canonincal gospels’ picture. Ana, the central character and Jesus’ wife, is attracted to Jesus because of his forthright kindness in a world ‘orphaned and broken’. The longing in the book’s title refers to the longing for Jesus, but it also covers other things – motherhood, the desire to rid Israel of the brutal Romans, the desire to be heard.

Ana is a daughter of an advisor to Herod, betrothed to her father’s business associate. She has been taught to read and write (on papyrus), and has a longing for using her voice, rather than simply falling into the role of (silent) wife. Contrary to the expectations of her time, she believes a woman who writes is ‘blessed’, and through all the twists and turns of the novel she holds onto her passion and right. Interestingly, Kidd makes her character the author of an actual Gnostic text that is one of Karen King’s favourites.

Though Ana is her focus, Kidd has a deep understanding of Jesus’ mission – how he is not a rebel like the Zealots, but interprets the law ‘liberally’ to allow for connection and giving, not to undermine Jewish law but to broaden it – God dwells not just in the Temple, but within the low and despised and largely voiceless, who in that time included women. Giving voice to someone like Ana while being sympathetic to the gospels’ portrayal of Jesus makes the book a feat, beyond its literary sophistication and the care she has taken to render the times historically convincing. (She also, by the way, comes up with a plot that might explain why Jesus’ wife is not mentioned in the New Testament.)

The Byzantine church rejected the Gnostic gospels for a number of reasons – because they were elitist in the sense of portraying a small, closed group with special knowledge, and less reliable in their veracity. Anyway, we don’t need them to show that Jesus treated women better than his contemporaries, or that the early church was remarkably egalitarian. Unfortunately, it’s true that the church subsequently has distorted this and hasn’t always treated women well. But Jesus was a champion of the marginalised, and whether he was married or not doesn’t make much of a difference to that.

PrevPreviousThe House of Good: Study finds that churches promote the common good
NextNSW needs to prohibit religious discrimination, but not like thisNext