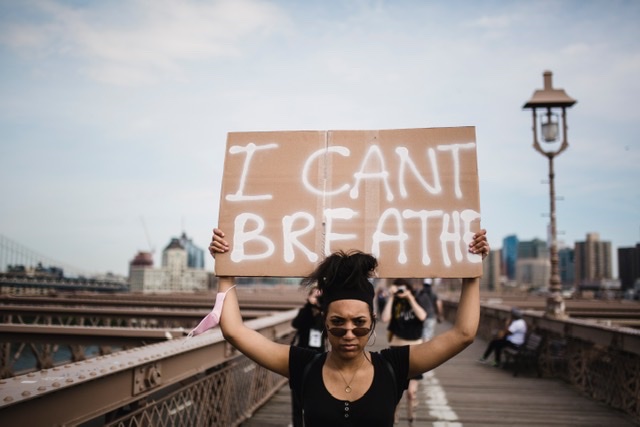 Over two hours, the keynote address explored the themes of racism and how past injustices continued to haunt the lands on which they occurred.

Dr Myers acknowledged that the keynote address was being delivered from stolen Chumash land.

The session borrowed from their upcoming book Healing Haunted Histories.

Haunting, Dr Enns explained, was to do with the stealing of another home. The session used haunting as a metaphor to describe how supressed memories of past atrocities continued to affect contemporary people.

Rage against police violence had seen recent protests in Los Angeles, which Myers recalled, was far from unprecedented.

He recalled that 28 years beforehand, the largest urban uprising in US history took place in the wake of Rodney King’s beating at the hands of police.

The keynote address quoted Raphael Warnock, who suggested that Black Americans are currently, “battling a double virus: Covid 19 and 1619.”

Violence against people of colour was not confined to the US, Dr Enns said, with it also present in Australia and Canada, where indigenous people continued to be locked up in disproportionate number.”

“These are apocalyptic times, because stuff is getting unveiled,” she added.

“Our North American and Australian consciences are haunted”.

“Haunting is neither superstition or individual psychosis.”

Jesus, Dr Myers said, often upset the social order of his day by healing the marginalised.

“One of the key pathologies Jesus healed was silence,” Dr Myers said.

“The hauntings go back…into our bodies and our body politic.”

The keynote speakers defined themselves as “settlers committed to the work of decolonisation.”

Dr Enns acknowledged that most people watching were products of colonialism.

“This characterises the history and present of the United States, Canada, and Australia,” she said.

The three countries, Dr Enns said, had been colonised relatively late in the colonisation piece, around seven generations ago.

The colonial project, Dr Myers said, was enacted “With the collusion of our church communities.”

Rather than being defensive about this, the keynote speakers suggested that churches needed to acknowledge their role as sometimes aiding.

“A discipleship of decolonisation is something like a twelve step program,” Dr Myers said.

The keynote quoted Chanequa Walker-Barnes’ suggestion that “taking responsibility for the way in which White culture and White identity have been formed and distorted ought to be the primary work of White Christians who claim to desire racial reconciliation and racial justice.”

The keynote speakers commended ‘restorative solidarity’, which involves doing our own work, listening to how communities express harm and exploring our own complicity in it, and working in solidarity perhaps eventually towards reconciliation.

As an example of a church denomination doing the work, Ched Myers pointed to the Presbyterian Church in the US, which recently renounced the doctrine of discovery and elected a Native American woman as co-moderator.

Dr Myers said that recent events had seen, “a swell of political imagination” emerge, such as the movement of communities “to defund the police and police themselves.”

The session also highlighted a number of Australian voices as those who could serve as resources, including Uniting Church theologian Dr Chris Budden, and Common Grace CEO Brooke Prentis.

The session closed with Ms Prentis’ work “We Can’t Breathe”.

From Texas to London to  the Blue Mountains, people joined the live stream from a wide range of areas.

“We’re not in Naamaroo or Greenhills. We are gathering in our dispersion,” Rev. Johnson said.

“But this is where God calls us.”

Some 122 people joined the live stream, about consistent with the number of people who typically attend the conference.

Day two of School of Discipleship takes place on Saturday 11 July on Facebook at 2pm. This will be a panel discussion featuring Dr Deirdre Palmer, Dr Sureka Goringe, and Dr Chris Budden.