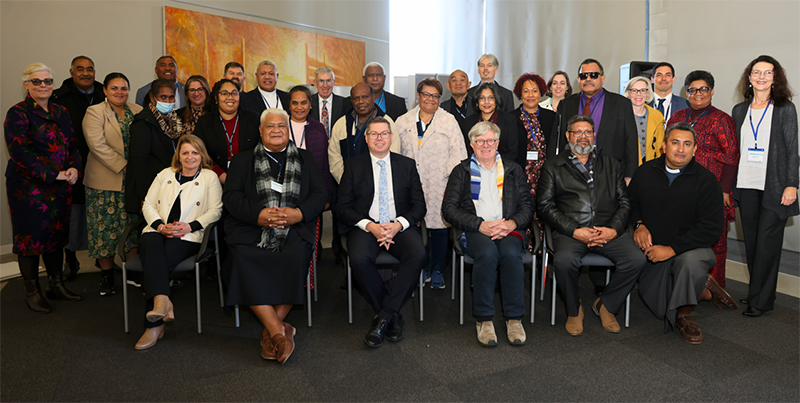 Representatives of Pacific and Australian Churches have concluded the first face to face meeting of the Pacific Church Partnership Advisory Network (‘PCPAN’) in Canberra, with a focus on self-determination, Pacific migrant labour, development in the Pacific and an affirmation of the vital role of Churches, faith-based agencies and civil society organisations as development actors in their own right.

The two-day meeting, which took place on Friday 22 July, under the auspices of the Australian Department of Foreign Affairs and Trade (DFAT) Pacific Church Partnerships Programme, was held on Ngambri and Ngunnawal Land at the Australian Centre for Christianity and Culture in Canberra. It was the third meeting of the PCPAN, which is made up of various constituent groups.

The meeting featured the “talanoa” or “yarning” process of dialogue – of deep listening, reflection and then speaking. Particular focus was given to learning about self-determination from a First People’s perspective and understanding migration (both circular and permanent) from Pacific Diaspora voices.

Rev. Mark Kickett and Ms. Alison Overeem from the Uniting Aboriginal and Islander Christian Congress and “Aunty” Pat Anderson, co-Chair of the Uluru Statement spoke about the challenges facing First Peoples and the crucial paradigm shifts necessary for both the Australian parliament and people for the journey of self-determination to reach its destination.

Pacific representatives raised their concerns about some of the very serious issues emerging for Pacific Island participants in the Seasonal Worker and Semi-Skilled and Skilled Labour programmes and called for more robust engagement with Pacific churches, NGOs and Diaspora organisations to ensure workers’ wellbeing and for pre- departure processes and checks and balances to ensure that these opportunities are not ultimately extractive.

Australian Minister for International Development and the Pacific, Hon. Pat Conroy joined the meeting. He said that Churches and wider civil society were development actors in their own right and welcomed the PCPAN as another avenue for Australia to listen to the Pacific and partner with faith-based organisations on key development issues.

With self-determination being a key theme of the meeting, the situation of West Papua was identified by PCPAN members. National Council of Churches Australia President and PCPAN Deputy Chair, Rev. John Gilmore acknowledged shared concerns for Papua, where a number of the Churches are also members of the Pacific Conference of Churches.

Rev. Dr Havea said that this first-in person meeting of the PCPAN was significant as it affirmed the Pacific Churches’ commitment to stronger engagement with First Peoples in the land now called Australia, to listening to Pacific Diaspora and to reflecting and working together on the shared issues facing our countries.