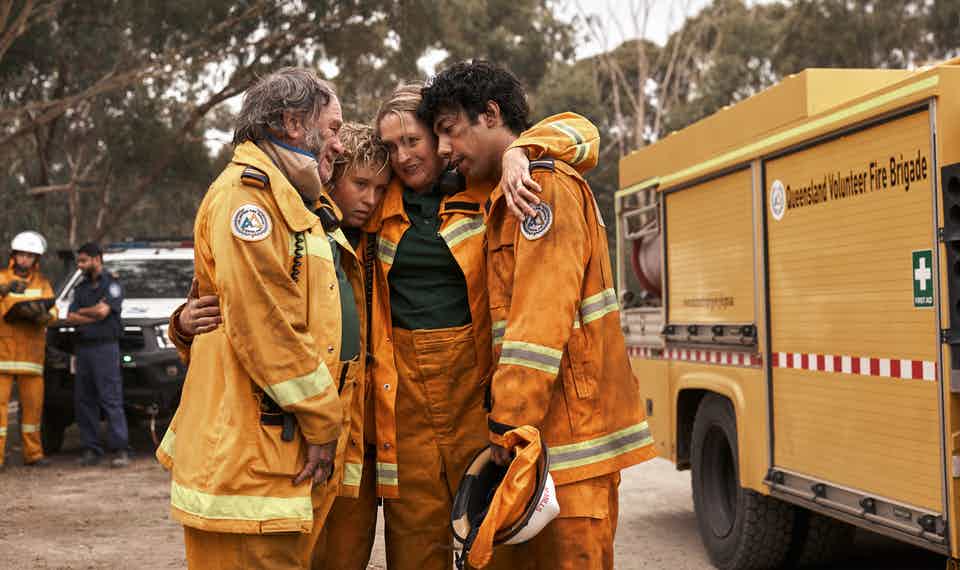 Bushfires are incredibly difficult to imagine, but once experienced are impossible to forget. They are events that most people would prefer not to think about — at least not in too much detail.

Just prior to Black Saturday, I was employed by the Victorian Country Fire Authority to research bushfire simulators, similar to earthquake or cyclone simulators, to help people prepare for the realities of a bushfire.

It sounds like a great idea, but it proved difficult to achieve. How do you expose someone to plus 40 degree heat, gale force winds, choking smoke and zero visibility? Never mind ask them to remember complex bushfire defence tasks while wearing fire-proof clothing, gloves, boots and goggles.

Each episode tells a story of the decisions, experiences and responses of different communities and individuals on the way. This clever story structure showcases a wide diversity of circumstances and situations: from the generational losses of farming families to the disrupted holidays of tourists and shattered dreams of tree-change commuters.

The series explores the way in which people make decisions around fire preparation, defence and evacuation: when to protect property and animals and when to save yourself.

Responses to emergency, and its aftermath

The first episode introduces the linking characters of Tash (Eliza Scanlen) and Mott (Hunter Page-Lochard), highlighting the risks and sacrifices volunteer fire fighters and their families make in helping protect their communities. Tash has been a volunteer for five years, since she was 16, while Mott is a new recruit.

This episode may generate some heated technical discussions among Australia’s nearly 150,000 volunteer fire fighters around safety procedures, equipment and protocols (which are generally much better than depicted here) but hopefully the show will recruit new and younger members for fire brigades, which are currently at a 10-year low.

Accurately depicting psychological responses to an emergency is probably difficult because few of us experience the hyper-charged adrenalin mode created by the imminent threat of death. It’s not the same as being stressed or worried.

Despite our expectations, people rarely panic or throw their hands in the air in an emergency, rather they develop tunnel vision and become highly focused on the tasks for which they have trained.

The everyday personal tensions that drive the plot of most TV dramas are utterly irrelevant in a fire emergency and quite literally displaced by well-practised drills and procedures. I can’t imagine firefighters failing to prioritise a colleague’s injuries or dithering with anxiety during a truck burn-over. Hyper-focus, not lack of focus, is a more common response.

The second episode more successfully depicts the traumatic aftermath of fires and the messy complexity of grief, anger and loss. Dairy farmers Kath (Miranda Otto) and Duncan (Richard Roxburgh) return to their property to discover their home destroyed and many of their cattle dead or needing to be put down. Otto and Roxburgh skillfully layer the pragmatic stoicism of rural life with the emotional detachment often generated by trauma.

This episode moves swiftly and lightly across the processes of bonding and fracturing that so often occur in fire-impacted communities, the cycles of blame and anger that scorch families and friendships and the pressures put upon relationships by the insistent demands of the media and even by those trying hardest to help.

These early episodes feel somewhat sparsely populated in characters as they focus on just a handful of individuals at a time, rather than the broader community they live in, but I imagine the later episodes will layer these characters and themes and deepen some of the discussions as the show progresses towards its finale.

The Black Summer bushfires, occurring as they did over a long season and large area of our most populated seaboard, exposed many more people than usual to the realities of fire. Our changing climate promises to make such fires an even more frequent and severe event.

No matter how much we don’t want to think about it, thorough and ongoing bushfire preparation and planning is the only way that people who live, visit or holiday outside urban areas can keep themselves safe from fires. TV shows like Fires play an important role in spreading that message and hopefully making more people take their own fire safety seriously.

Danielle Clode worked for the Victorian Country Fire Authority as a research consultant on psychological preparedness for bushfires in 2009 and assisted with an Australian Research Alliance for Children and Youth funded project on children’s bushfire recovery. She is currently assisting the Adelaide Hills Council with their community resilience and readiness strategy.

All six episodes are now streaming on ABC iView