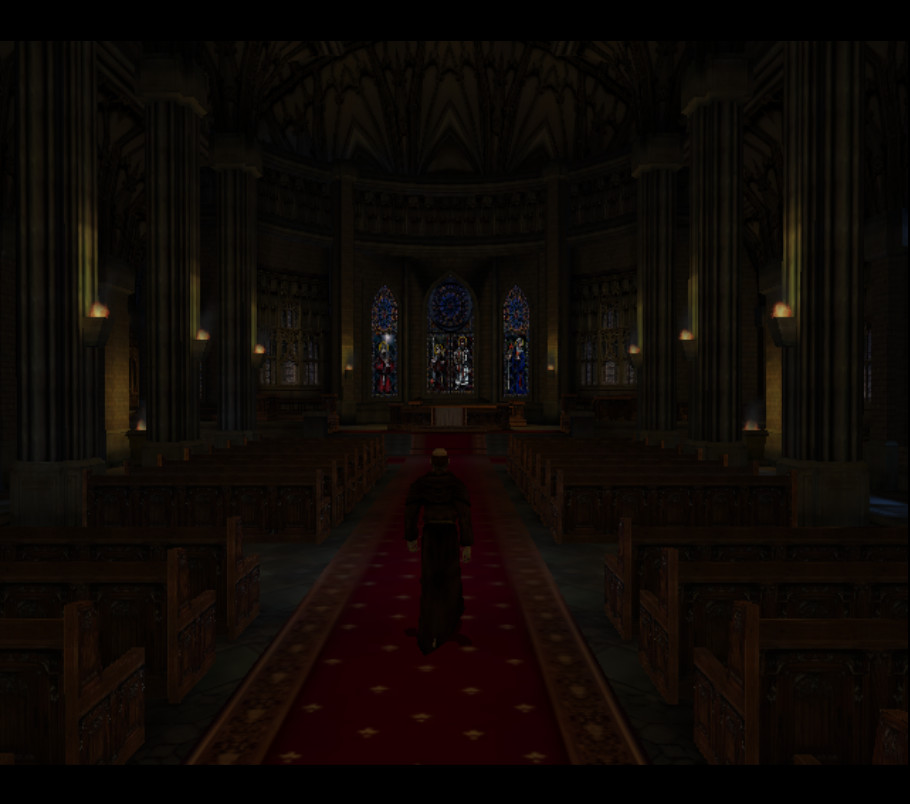 “This cathedral used to be a place of peace. Now many strange things happen here.”

Nearly twenty years after its initial release, the Gamecube psychological horror Darkness still stands out as having some of the best treatment of religious themes in videogames. With numerous levels set in churches, temples, and tombs, the game borrows from real life locations to add a real-world element to its horror. Perhaps the best of these is the game’s adaptation of a famous European cathedral at three distinct points in history.

With an epic plot spanning 2,000 years, Eternal Darkness is the story of the Roivas family and its struggle against a powerful cult known as the Ancients, who intend to destroy humanity. The player controls twelve unique characters, most of whom end up dead or driven insane by their encounters with this supernatural evil. As creator and former Silicon Knights head Dennis Dyack said in an October 2014 interview with IGN, the game was pitched as a unique, Lovecraftian “environment-based game, where you played multiple characters over time, where some characters you played only for twenty minutes and they died.”

Located in Amiens in southern France, Oublié Cathedral is arguably Eternal Darkness’ creepiest and best-realised game environment, one worth analysing for its intricate design. When players first encounter the Cathedral site, the year is 814 AD. They control a character named Anthony who is called upon to deliver a message to Emperor Charlemagne. By the end of the level, Charlemagne and Anthony are dead, with the Cathedral revealed to be a shrine to one of three evil gods, Chattur’gha, Xel’lotath, or Ulyaoth. Exactly which of these evil gods is determined by what medallion the player chooses early in the game. The player later experiences the cathedral during other time periods; the Spanish Inquisition, as Franciscan monk Paul Luther and again during World War One, as war journalist Peter Jacob.

Each time the player returns to Oublié, they encounter it with minor redesigns and added details, which reinforce that time has gone on, but the Cathedral’s evil secret remains. The player anticipates that horrible things are going to happen before their character does, but is forced to play through interactions in the cathedral with this inevitability in mind. For example, when Paul Luther arrives during the Spanish Inquisition, he intends to investigate the disappearance of another monk. During his exploration, he becomes confused upon the nature of the Cathedral. Strangely, for a place ostensibly under the scrutiny of the Spanish Inquisition, it is missing any Bibles or icons.

As the level progresses, and Luther finds his way to the catacombs below the cathedral, the source of the evil is revealed as the Black Guardian, a giant monster that crushes Luther instantly.

In the October 2014 IGN interview, Dyack recalled the shock that this abrupt death caused when Eternal Darkness was released. “That’s one of the longest levels in the game, you go through the Cathedral and that’s when you see the Greater Guardian,” he said. “You go right to the end where you think you’re going to have this big boss fight and you just get squashed. It broke every expectation of the gamer.”

“I remember sitting down with a lot of the game designers from Nintendo and we showed them that …and they were just looking at us like, “What? That’s it?””

Dyack said that, rather than cheapening character deaths by making them so abrupt, he intended to create the impression that the protagonists were up against an evil force.

“When we pitched Eternal Darkness, they were looking at it going, “everyone dies?”” he said. “And I go “yes…people die. They’re real heroes.”

The fact that so many characters of Eternal Darkness’ characters die or are driven insane therefore serves to highlight their bravery in confronting the Ancients and makes the rarer instances of success all the more meaningful. This can especially be seen in the World War One level, where Peter Jacob succeeds where Anthony and Paul Luther fail, surviving the cathedral and escaping with a powerful artefact that later helps save humanity. The moment carries weight because of previous characters’ lack of success. Peter Jacob is one of the few to survive a brush with the Ancients, although it is hinted that he has been psychologically damaged by the experience, unable to sleep for his regular nightmares. Oublié Cathedral, then, is a strong example of unfolding level design, as the player gradually encounters the elaborate building, from the old tower that Anthony encounters, to the subterranean catacombs that lead to the Black Guardian’s lair.

This attention to detail in level design carries over to how well Eternal Darkness fares in transporting the player to the horrors of World War One. With the exception of Valiant Hearts and the odd war sim, the War to End All Wars has not been subject of many games. There are a variety of reasons for this. As Dan Crabtree has previously pointed out, the war was the subject of protracted campaigns and had complex causes, which doesn’t make for a compelling narrative involving scope for heroism. The Cathedral manages to stand out, then, as one of the few videogames that captures this time in history. Located near the Somme, one of the war’s most violent locations, the cathedral is full of stretchers. The pews, visible in previous eras, have been moved—the army needs to make room for more bodies. The sound of constant shelling can be overheard at the beginning of the level.

As well as skilfully capturing the horrors of the Great War, Eternal Darkness’ Oublié Cathedral somewhat accurately portrays the superstition that can be found in some traditions of European Catholicism. Luther discovers that pilgrims are being lured to the Cathedral with the promise of viewing a relic called the Hand of Jude, and murdered. This fascination with relics can be found in other real-world French Cathedrals, such as Notre-Dame de Paris, which is said to house a thorn from Christ’s crown, a piece of the Cross, and one of the nails that was used to crucify Jesus.

What makes the Oublié Cathedral more authentic still is that it is modelled after a real place. Amiens Cathedral has the largest interior of any cathedral in Western Europe, and is considered a significant example of Gothic architecture. That Silicon Knights drew on a real location, as they also did for Angkor Wat, demonstrates a commitment to detail that the game is well remembered for. It should be noted, too, that the game featured a fictional underground city at that location, years before archaeologists found one.

Eternal Darkness is not the only game to feature the Cathedral, which also served as a location for a mooted spiritual successor, Shadows of the Eternals. Shadows’ first trailer closely mirrored Anthony’s level in Eternal Darkness, with the same setting design and need to pass on a message. Shadows failed in numerous crowdfunding campaigns, however, and the team responsible for it has since moved on. In 2018, Dyack announced he is working on a new role-playing game, Deadhaus Sonata, further quashing fan hopes of a sequel or successor. Nintendo, however, recently renewed their copyright for the game. The new application adds mention of ‘game cartridges’ which may indicate that a re-release for the Nintendo Switch is in the works. Whether gamers will ever have to return to the cursed cathedral, with its secret lying deep in the catacombs, remains to be seen.

Eternal Darkness is available on the Nintendo Gamecube and Nintendo Wii consoles.

PrevPreviousFriends: The One Where They Get Back Together
NextPentecost, the Spirit, and the people of GodNext