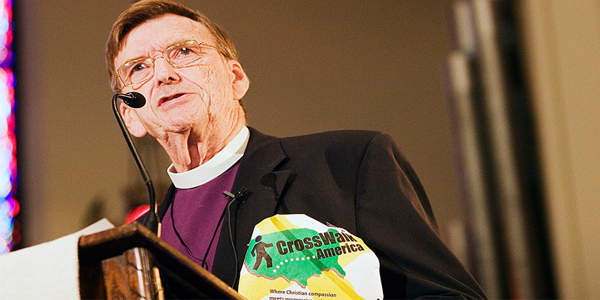 After suffering a stroke in 2016, liberal author John Shelby Spong has written his final book. Unable to hold a pen for long periods of time, Spong wrote the book Unbelievable with the help of his wife.

At the time of the stroke, Spong was some 90 percent of the way through the book’s writing.

Spong, 86, is controversial for his liberal theology. This includes his argument that the concept of God as a personal Deity, or theism, is outdated.

As well as lecturing and undertaking book tours around the world, Spong has received several death threats. He was banned from speaking in Sydney Anglican churches during the 2007 tour promoting Jesus for the Non-Religious (despite having no bookings to do so). A 2003 article by Barney Zwartz described him as “The bishop that doesn’t believe in God” a label that Spong has rejected.

In an article on PCN Britain’s website, Spong writes that he wanted his final book, “to be more than a mediocre work.”

“It had to be clear and understandable,” he writes.

“The Incarnation, the virgin birth, resuscitation as the meaning of resurrection and the concept of the Holy Trinity-all are explanations that will never last. People hear the experience of Christ being challenged when it is only the explanation that is at stake. I wanted to make sure that people could understand that explanations have to die, but the experience remains eternal.”

In a mostly positive review of Unbelievable, Medium’s Zachary Houle writes that the book, “has shattered a few things that I thought I believed about the Church into a million broken pieces.”

“Things will be different from now on. And I wonder if I’ll be reviewing many more Christian books in the future. Why? Unbelievable buries them all, making them simply irrelevant.”

“The Peril of the Self-Referent”

“The fact that he has retired won’t mean the end of his contributions because his disciples will take up the charge,” Rev. Dr. Hirt said.

“What his theology has done has not brought illumination to the faith. It’s only fuelled the fire of fundamentalists against what they perceive as liberalism.”

According to Rev. Dr. Hirt, Spong’s theology “represents the peril of the self-referent that curiously aligns him with Donald Trump and Joel Osteen.”

“[These figures] choose to ignore the great apostolic traditions of the church as if they suddenly reinvented Christianity.”

Spong was the Episcopalian Bishop of Newark from 1979 until his retirement from the role in 2000.

Unbelievable: Why Neither Ancient Creeds Nor the Reformation Can Produce a Living Faith Today will be published by HarperOne on 13 February, 2018.