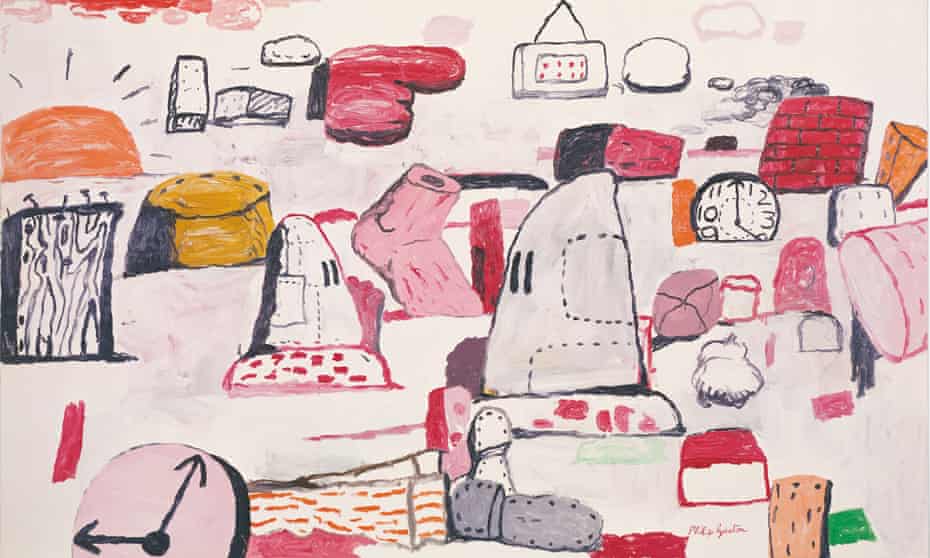 Recently a major retrospective exhibition of the twentieth-century American painter Philip Guston was cancelled because curators were worried, during a time of prominent Black Lives Matter protests, about how the images of hooded Ku Klux Klansmen in his paintings would be interpreted. Some artists complained about the decision, rightly noting that Guston’s art was obviously critique. Ironically, the exhibition was to be titled ‘Philip Guston Now’.

A number of books were published to ride on the coattails of the exhibition: two of them appropriately extensive, hefty monographs. Guston’s daughter Musa Mayer’s slim book is, in contrast, an affordable summary which nevertheless neatly plots his life and career, in words and images, and even manages to include some works not seen in the other books.

Guston was a precocious talent, swiftly mastering monumental forms influenced by Picasso. Like other artists, he was employed to paint murals in the Depression, and like his friend Jackson Pollock, he later turned to abstraction. Abstract expressionism, which eventually led to Zen-like drawings of only a few lines, became, in Guston’s eyes, a bit too nice and something of a dead end. He wondered, unlike other abstract artists, what the point of it was when there was so much ill in society to say something about in art.

His turn back to the figurative (a term which Guston, channeling Picasso, saw as an unhelpfully strict theoretical category) didn’t happen overnight. Urgent blacks and pinks (later signature colours) began seeping across the pretty, abstract canvasses in the late 1950s. And head-shaped forms began to appear in the centre of the canvasses as if materialising out of London fog.

After moving to Woodstock in the late 1960s, in an attempt at reinvention, the minimalist drawings morphed into cartoon-like, blocky images of household objects. (Guston had taken a cartooning course in his childhood and though apparently quickly tiring of it, the approach seemed to sink in, emerging again in his late style.) Amongst them appeared, like a wraith, a crude painting of a Klansman in a hood, the return of an image that had haunted him in childhood, resurrected by the convulsions and racist violence of late 1960s America.

Weirdly though, perhaps in imitation of the Christian doctrine that sees sin in everyone, Guston described the hood paintings as self-portraits. He said he wondered if he was capable himself of such evil, even though, being Jewish, he was a target of the Klan’s hatred. He was also poking, of course, at the slumbering, monstrous, ‘original sin’ of America – racism – though critics were almost uniformly critical, describing the paintings as ‘embarrassing’ and ‘clumsy’. (William de Kooning was an exception, encouraging Guston to paint what he felt he needed to.)

While unsettling, the images were also parodic, even cute, hinting at how normalised racism had become (or always was) in American society. (It’s perhaps this aspect that frightened recent curators.) In a story repeated throughout the history of art, the late paintings didn’t sell initially but eventually made him famous. (Without them he would have been a little-remembered, minor figure in the abstract movement.)

His youthful cartooning also returned in his crude caricatures of Richard Nixon, in the tradition, as Mayer says, from ‘Goya to Hogarth to Picasso’. In returning to drawings for books, he blurred the by-then rigid line between fine art and illustration.

In the late paintings, household objects became symbolic – of futility and boredom, or genocide and systematic violence. In the context of his paintings, even cherries in a bowl in one of his paintings look malevolent, like stockpiled munitions. When presented cumulatively, disembodied legs and shoes present a reminder to not forget the horrors of war and to resist the normalisation of mass violence.

Mayer says Guston ‘cannot look away’, and although Guston also resisted easy symbolic readings of his work, and insisted he felt like a cypher, with the images appearing with no clear meaning, perhaps we can view the works as a reminder to be vigilant too.