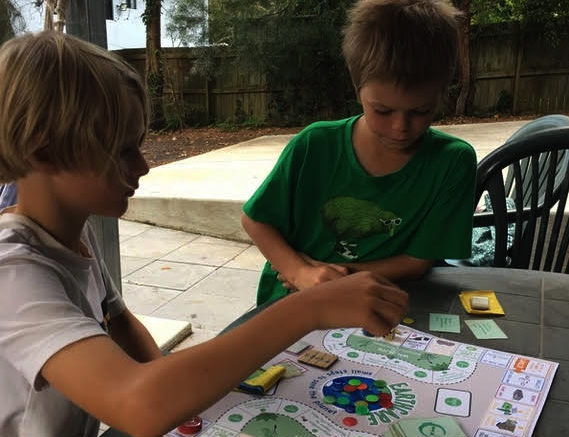 Aiming at a broad audience “from 6 to 106”, Earth Care is a board game that aims to educate players about how to take better care of creation. With a Kickstarter campaign currently underway, creator Lisa Wriley hopes to bring the game to a broad audience.

Created by R.J. Reynolds, the late-1970s board game Conservation was a popular title, especially in New Zealand.  One copy of the game was given to Lisa Wriley’s family as a gift.

“My mum is a Kiwi and we had regular holidays in New Zealand, staying with family,” Ms Wriley said.

“The Conservation game was described as a “game of skill for children and adults about recycling resources and caring for our land”. It was well known as the “Be a Tidy Kiwi” game.”

“I loved the game and it has been my dream for some years to re-invent it.”

R.J. Reynolds officially signed over the legal rights to Conservation to Ms Wriley in early 2020. She has been developing it since, with help from a $5000 grant from the Nancy Shelley Bequest fund, managed by the Blue Mountains Quakers.

Ms Wriley brings to the game her experience in environmental education and campaigning. This included her work leading the NCYC2003 Earth Team, helping make the week-long youth conference a waste-wise event.

“When people ask me how I got interested in the environment – I always think of [the Conservation game],” she said.

According to Ms Wriley, Earth Care aims to follow in its footsteps as, “a fun way to explore the many ways we can care for the earth, connect with nature and help conserve the planet’s resources.”

“Take small steps to save the planet and earn points.  Make a mess, waste energy or water and lose points.  I CARE cards help you do good things.”

The Kickstarter campaign will run until midnight on Sunday 11 July 2021.  At the time of writing, the campaign was slightly less than halfway towards its funding goal, with $11,741 of its $24,680 budget pledged.

“My medium-to-long-term goal is to sell thousands of copies of the game in Australia,
New Zealand and beyond between now and the 50th Anniversary of the Conservation game in 2026,” Ms Wriley said.

In New Zealand the game will be called Conservation 2 and feature the Be a Tidy Kiwi icon.  Ms Wriley told Insights that she has also developed a travel/back pack-friendly cloth version of the game, which includes clay player footprint pebbles because players are taking, “small steps to save the planet’.

Ahead of Earthcare’s official release, Ms Wriley said she aims to set up a new social enterprise called HOPE – Helping Our Planet Earth, and will be donating 50 percent of the profits to conservation, earthcare, and permaculture projects.  These will be nominated by buyers and volunteers who will help make and pack the games.

Earthcare’s Kickstarter campaign runs until midnight, on Sunday, 11 July. For more information, including photos and videos of the making of the game, visit the official website.