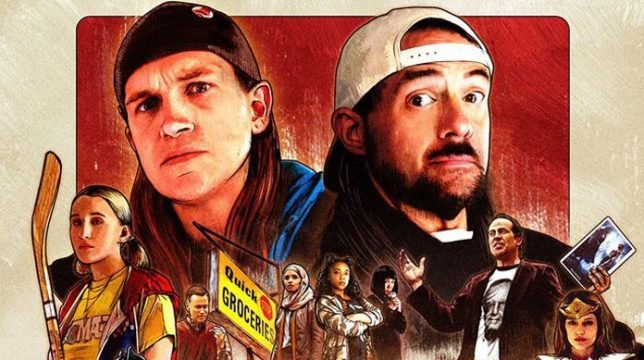 Jay and Silent Bob Reboot is something of a paradoxical movie, managing to be a biting and clever indictment of Hollywood’s lack of creativity and yet a (conscious) retread of films released twenty years ago. With the Weinstein scandal (and filmmaker Kevin Smith distancing himself from his erstwhile production company), the film also had a puzzling distribution, with Saban showing the film as part of a road show (and effectively giving Australia one night only to show it in theatres).

The film catches up with Jay and Silent Bob (Jason Mewes and Kevin Smith), who begin a new road trip from their native New Jersey to Hollywood. Fresh off losing the legal rights to their own names to a Hollywood studio making a new reboot of the film about their lives, the duo aims to prevent the film from being made. Along the way, Jay reunites with his old flame Justice (Shannon Elizabeth) who informs him that he is a father. Swearing to never tell his daughter Millennium Falcon (Harley Quinn Smith), Jay must bring her and her diverse gang of friends along on the road trip, as they plan on becoming featured extras on the very same film that Jay and Silent Bob aim to disrupt.

Jay and Silent Bob: Reboot is Kevin Smith at his fourth wall breaking, self-indulgent self. If Smith’s films don’t appeal to you, this won’t be the film to convince you (some of the dialogue and content is so inappropriate that Insights won’t display the trailer in our review). The script is far from Smith’s best, with the dialogue standing out as having lines that would benefit from being cut. The film is also a deliberate retread of Jay and Silent Bob Strike Back, and viewers’ mileage may vary according to how much they enjoyed that film.

And yet, to dismiss Jay and Silent Bob Reboot as only being a retread of Kevin Smith’s films is reductive, and the film has some remarkably poignant things to say about becoming a parent. Jay’s revelation, and the commentary from those around him, are worth watching for new parents, and give the film added gravitas.

The sheer number of cameos from Smith’s prior films also makes Jay and Silent Bob Reboot stand out. From Matt Damon to the entire cast of Smith’s breakout film Clerks to Chris Jericho, these short appearances carry certain parts of the script.

Particularly inspired is a cameo from Ben Affleck, who is on the way back into Hollywood (and his friendship with Kevin Smith) after combatting alcoholism. The moment is poignant for many reasons.

One person who could not be in the film, but makes his presence felt, is the late great Stan Lee who passed away before production began. Those who can wait until the credits roll can see a moving tribute to Lee, along with a whole host of other mid credits material.

Jay and Silent Bob Reboot releases on Blu Ray and DVD on Wednesday, 6 May.