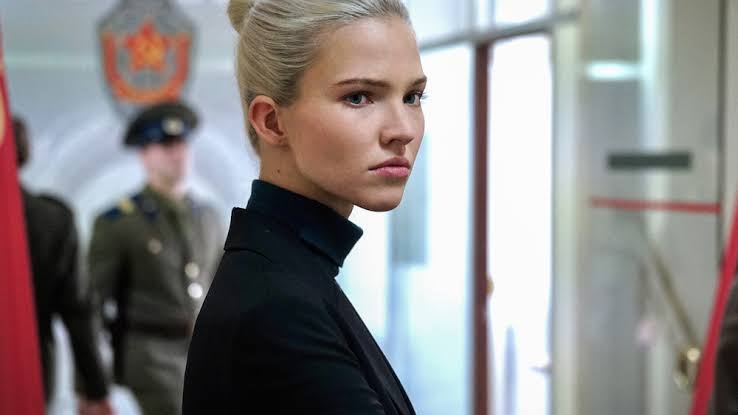 Luc Besson is a director whose career has ranged from extreme highs and exceptional lows. Films that range from classics like The Fifth Element and Leon: The Professional to the debacle of 2017’s Valerian and the City of a Thousand Planets.

This visionary filmmaker proves that he is always willing to take risks with his projects and career. His last outing had all of the earmarks of a feminine John Wick, but the production became caught up in Besson’s own personal legal difficulties. Anna did not seem to have a shot at success, but may prove to be worth discovering in its second life in the world of streaming.

Growing up in Russia, Anna managed to get herself caught up in a life of domestic abuse and drugs. As things begin to spiral out of control and all seems lost, she is made an offer by the KGB. Alex Tchenkov (Luke Evans) introduces the young beauty to the world of espionage by putting her under the tutelage of the infamous handler, Olga (Helen Mirren). The operatives place the young agent undercover in one of the most prestigious modelling agencies as a means of getting close to some of the world’s most influential men.

As she works her ways into the world of fashion, Anna becomes one of the most reputable and capable assassins for the Russians. A skill set that gets the attention of other agents within the intelligence community. She is eventually approached by Leonard Miller (Cillian Murphy) to serve as a double agent for the US government. The talented agent must determine where her loyalties are found and how she can use this opportunity to gain the one thing she wants in life, freedom.

This is a project that managed to get swept into the whirlpool of the #MEtoo movement that swept across Hollywood in 2019. It had all of the earmarks of the right film at the right time with a strong female lead and the action sequencing that is reminiscent to John Wick and Atomic Blonde. Combining these two elements with Besson’s unique storytelling abilities, Anna should have been the newest action star to come out in theatres. Unfortunately, behind the scenes realities and the new level of accountability of filmmakers kept this from occurring.

Can this production find a new life in the world of streaming? It has all of the potential to find its audience as things begin to settle down on the legal side of the industry and with the world living at home. Besson did manage to utilise an innovative, if not familiar style of writing the film in reverse. By telling the story through a non-chronological manner, the veteran writer can include surprising twists that are familiar, but still manage to add intrigue to the well-worn genre.

Helen Mirren, Luke Evans and Cillian Murphy do add to the depth and richness of each character, especially award-winning actress Mirren as the diabolical and calculated mentor. The award-winning actress provides the gravitas that is needed to her character and the film. The weakest element of the cast would be newcomer Sasha Luss in the title role. She manages to carry the action sequences and is believable as the model turned assassin. Still, the believably of her unwitting brilliance is a stretch. Her beauty and physicality cannot mask that she may not have the acting chops to rival her supporting cast. Her stoic manner is reminiscent of Keanu Reeves’ characterisation of Wick, but Luss lacks the maturity and depth to capture the same level of intensity. Despite this aspect, the film still manages to capture the intrigue needed to carry this story through to the end.

One thing that Besson can be credited with is his ability to develop strong characters to mirror the time. Anna comes at a time when quietly calculating, sexy and hyper-violent assassins seem to be all the rage. It is a clever and engaging film, but it suffers from being released at the wrong time in cinematic history. A movie for the Wick fans who do not care about the drama behind the camera. Those who are merely looking for intense, action-packed entertainment.

What is the cost of freedom?

Freedom is at the heart of the young assassin’s desires. She merely wants to be free to live as she wants to live. What does it really cost? Many think that freedom is a right, but may miss the fact that behind every freedom, there are sacrifices by people or nations to secure those freedoms. With espionage as the backdrop, Anna shows that many of the freedoms that a nation appreciates come from great struggle by individuals who are willing to sacrifice their own freedoms for the benefit of the whole.

Does the Bible have anything to say about freedom? It is a bigger topic than one paragraph affords. The Apostle Paul wrote about freedom throughout many of his letters. The key idea is that as Christians we are free from the presence and struggle of sin, but we are still bound to God and a life of serving. Also, that the freedom that can be enjoyed in this life came at a great cost, the death of the Saviour.