The Uniting Church in Australia and the Presbyterian Church of Korea celebrated 120 years of partnership and mission during the Uniting Church’s Assembly meeting in Adelaide on July 17.

The Rev. Dr We Kun Park, Moderator of the Presbyterian Church of Korea, said the Uniting Church and the PCK had built an enriched mission partnership for over 120 years.

“I pray that the solid partnership between the Uniting Church and the PCK would continue to enrich and empower the mutually supported commitment for mission through worship, witness and service,” he said.

“We, as partnered churches in mission, will continue to support, trust, and pray for one another.”

He said churches in Korea had prepared for the 10th Assembly of the World Council of Churches (WCC), to be held in Busan in 2013, and encouraged the Uniting Church’s active participation and support.

He said, “I continue to pray for the 13th Uniting Church Assembly and the ongoing journey of the Uniting Church, that we all may glorify God and bear fruitful outcomes in mission and ministry.”

During the event, sponsored by UnitingWorld, the PCK presented videos about the history of the Presbyterian Church of Korea and Australia’s missionary involvement.

The media presentation of the 100-year celebration of the Presbyterian Church of Korea described how Korean churches had experienced remarkable growth and revival and how Presbyterian Christians spread the gospel with a serving and loving spirit.

The first Korean Presbyterians were Hong Jun Baek and Sang Ryun Seo, who received the gospel from Manchuria. They helped missionary John Ross by translating the Bible into Korean.

With the arrival of American missionaries, the gospel spread rapidly through schools, hospitals and welfare ministries.

There followed great revivals, the formation of a presbytery and a wave of evangelisation.

The church survived a time of distress during the Korean War and entered a period of social modernisation, democratisation and evangelisation.

The Presbyterian Church of Korea now sends staff to attend disasters overseas, helps people in need with diaconal ministry, supports the peaceful reunification of Korea, graduates students through seven theological seminaries, sends missionaries around the world and participates in ecumenical cooperation and exchange with overseas churches.

The media presentation on 120 years of Australian mission work in Korea told how in October 1889 the Presbyterian Church of Victoria sent Henry Davis and his sister, Mary, to Korea, where Mr Davis helped an American missionary with translation work. Seeking to spread the gospel, he decided to travel from Seoul to Busan but after three weeks travel on foot was infected by smallpox and died.

The Australian mission responded by investing most of its financial and human resources in Korea. It established churches and mission posts in Busan, Masan, Geochang, Jinju and Chungmu.

Australian missionaries started schools and responded to the need for healthcare for the poor by opening hospitals and medical schools.

The video told how Australian missionaries never stopped preaching the gospel and serving the Korean people despite sometimes unbearable conditions. Among 127 missionaries sent from Australia to Korea it noted Alan Stuart, who was President of Busan theological school and later established a Korean church in Melbourne; John Brown, who devoted his life to Korea for 12 years and brought pigs and goats from Australia to improve Korean breeds; Dick Wootton, who worked for labourers in an industrial mission; and Barry Row, who established a vocational school for the disabled. 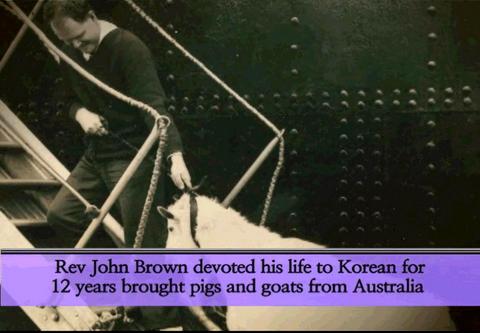 The relationship continues to the present, with fellowship, exchanges, a joint declaration of cooperation, calling and vision and a celebration of the “Witness of Grace”.

In early 2012, Helen Mackenzie was posthumously awarded the Korean Government’s Grand Order of Mugunghwa, recognising the work of Australian mission in Korea and further enhancing the relationship.

The Rev. Myung Jin In, Ilsin Hospital Board Chairperson, presented the medal to the Assembly, saying, “As far as I know, this is the first time any missionary has received such an honour from the Korean Government.”

He said, “Helen remained all of her life adopting the poor and the sick as her family. It is a privilege for me to bring this wonderful news in your church.”

Greetings from the Presbyterian Church in the Republic of Korea were brought by the Rev. Yoo Jung-Sung, Moderator, who said the Assembly theme, “life overflowing”, evoked the affirmation of abundant life in God through Jesus Christ and was “a challenge to our churches to let it overflow and become the source of transformation and healing in our world”.

He said, “In a fast-changing world, our churches have been confronted with social, political, economic and cultural challenges. You seek to redefine the role of the Assembly, set new directions  and new institutional and programmatic structures that will facilitate the church’s response and support for the most affected people and communities in society and the world.

“In a similar vein, the PROK has been active with its prophetic witness in Korean society. The challenges posed by the present global economic order have seen the widening divide between the economically powerful and vulnerable groups, the increasing marginalisation of a significant number of people and the insatiable appetite of industrial and investment companies for profit and access to rare earth resources.”

He said that quest for sustained economic growth had destroyed human ecology and the environment.

“The PROK, along with the ecumenical community and partners, has been confronting these with the gospel of peace, justice and the integrity of creation.”

He said, “We are grateful that, through the years, the Uniting Church and the PROK have fostered a partnership  that has reached presbytery level, such as those partnerships between Gunsan-Iksan and South Australia, Seoul South and Ku-ring-gai, Chungnam and Parramatta Nepean, and Daejeon and Georges River.

“The increasing cooperation between the partner presbyteries of our churches is a visible sign of our commitment to work for common goals that will show forth God’s life-giving purposes.”

Moreover, he said, it was heartening for the PROK to know that the Uniting Church had integrated into its church’s life and ministry the Korean congregations now recognised as the Korean Presbytery in the Synod of New South Wales and the ACT.

“We are happy that ministers trained and ordained in our church are working in the Uniting Church faithfully and want to express many thanks to the Assembly, synods, presbyteries, ministers and congregations where they are linked for your support, hospitality and friendship given.”

He said, “We ask you to pray and walk along with us in our journey for God’s abundant life to grow and prosper through our committed work for peaceful reunification of the Korean Peninsula, economic and ecological justice and peace in our country, in Asia and beyond. May God’s life overflowing with peace and love sustain us.”

During the celebrations, a tribute also was made to the late Rev. James Mackenzie, who worked tirelessly in mission on Ul Leung Island, which was compared with Australia’s Christmas Island.

Presentations were made to the Rev. Professor Andrew Dutney, President of the Uniting Church in Australia, and the Rev. Rronang Garrawurra, national chair of the Uniting Aboriginal and Islander Christian Congress, and to the Rev. Myung Jin In and the Rev. John Barr, until recently UnitingWorld Associate Director for Church Solidarity (Asia).