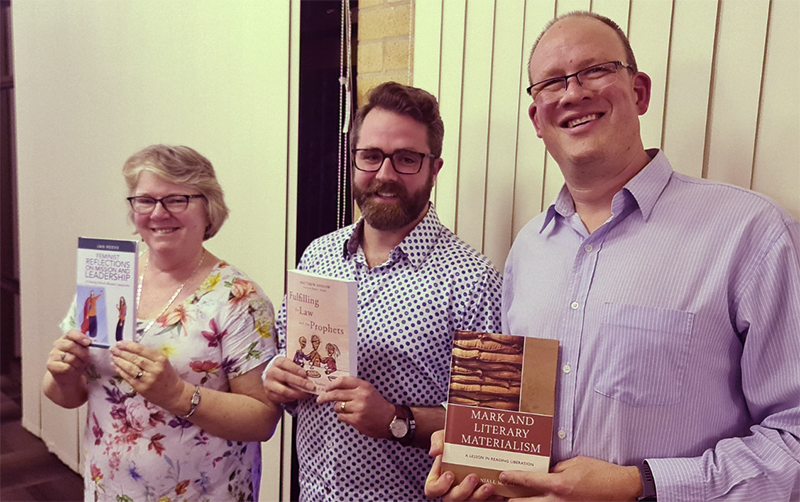 Matt Anslow’s book, Fulfilling the Law and the Prophets positions Jesus as a popular prophet within Matthew’s Gospel, and explores the implications of this.

Associate Professor David Neville spoke about the book. Dr Neville was responsible for supervising the PhD dissertation that led to the book.

“With this book, Matt Anslow rectifies what was once a curious discrepancy,” he said.

“The Gospel according to Matthew has been relatively neglected when it comes to New Testament prophecy.”

“Scholars have long said that Luke’s Gospel is prophetic, but now…this must also be said about Matthew’s picture of Jesus.”

He praised the book’s “thorough preparation” and grounding in the Gospel in the book’s opening chapters.

“The heart of this book is the four exegetical chapters, each of which focuses on four passages.”

“A significant contribution to Matthew scholarship…This book is as carefully crafted as it is considered.”

Dr Anslow said the writing and publication of the books had been a major undertaking.

“My project, far from being a pure intellectual curiosity, has been the result of practical and pastoral concerns,” he said.

He said that a wide range of theological influences had informed him as a Christian.

“I’m a bit of a sojourner on the ecclesial and theological map,” he said.

He said this had led to him developing some critical opinions about various understandings of prophecy.

He said that while prophecy as “speaking truth to power”, such as advocacy on behalf of refugees, was something of a misunderstanding, potentially “seeking a kingdom without the King.”

He said his book aimed to provide a better understanding of prophecy.

“Matthew’s gospel seeks of prophecy more than any other New Testament text.”

Feminist Reflections on Mission and Leadership

Feminist perspectives on women and leadership is the subject of Jan Reeve’s new book.

“This book invited many other women, especially women in leadership, to reflect on their own leadership.”

Rev. Park said that she had been treated well by family because they understood that she had cultivated her mother’s womb for a male child.

She said her experience growing up had been a backseat role to male members of the family.

“When I was elected Moderator Elect, someone referred to me as the foreign widow,” Rev. Park said.

“I was grateful to be connected to a biblical figure.”

She said her experiences could be shared across many contexts.

“I was reading Jan’s little but powerful book, I could hardly prevent myself from…cheering the prophetic voice.”

She said that women’s experience of struggles meant that they provided a unique way of being leaders.

“Thankyou for your perseverance over 25 years (of ministry) which you include in this book,” she said.

Rev. Park said she was “most grateful” for the book.

“God laid on my heart to record the experience of women in ministry in the Uniting Church.”

“I also wanted to gather some of the experience of the earlier women who were…trailblazers.’

“These women encourage me to write.”

She said that the book was the culmination of many years of writing essays and interviewing women who were in ministry in the Uniting Church.

“I found it quite revealing what I found (more recently).”

This, she said, included a drop off in the number of women who were candidates for ministry, down to around 24 percent in 2021.

“I look forward to the time when more women will (serve) in the Uniting Church and other denominations as ordained leaders.”

He previously told Insights, “In Mark and Literary Materialism I look at the way Christian scripture was used to resist apartheid in South Africa in order to develop a framework for reading scripture to against oppression,” Dr McKay said.

“I focus on how that Mark’s Gospel brings forward the liberative-utopianisms of oppressed peoples, reflects on action and violence against oppressors, and shows how religio-political communities might constitute a home for resistant vision.”

“I hope that the way in which my reading resonates with anti-apartheid resistance might inspire the Church better to resist the ideologies and oppressions of the capitalist liberal nation-state.”

Emeritus Professor Gerald West, who delivered the 2022 May Macleod Lecture, introduced the book.

He spoke about the shift in theology.

“I think the book has something to offer…not only in terms of literary production, but also literary reception.”

“It comes at a time when de-colonialism (as a focus in theology) is thriving.”

“It also makes a contribution to our reading of Mark.”

“Mark lends itself to a linkage between the ideological and the material…that I think will resonate with our context.”

“My hope would be that this book would make a contribution in the Australian and wider Pacific context.”

“My sense is that Niall is a faithful remnant…within the Australian-Pacific area, which is engaging with liberation theology.”

In a sombre moment, Professor West noted that Albert Nolan, one of the dialogue partners in the book, had passed away the previous night.

Rev. Dr McKay said he had learnt a lot from Professor West.

“His humble life and faith were in contrast to Albert’s leadership and prophetic work,” Rev. McKay said.

“I’m not sure what reception my book will get or who will read it.”

“If it contributes to a growing hermeneutic that helps (support a life giving) liberative hermeneutic, I will be happy,” he said.

A joy to witness

Rev. Hansford said that it was a gift to be a Moderator between “two fabulous women.”

“A colleague of mine said it is always useful to quote the Basis of Union.”

He quoted a section about the role of scholarship.

“I’m here…to let you know how proud I am and how proud the Synod are of work like this,” Rev. Hansford said.

“The Uniting Church acknowledges that God has never left the Church without faithful and scholarly interpreters of Scripture, or without those who have reflected deeply upon, and acted trustingly in obedience to, God’s living Word.”

“In particular the Uniting Church enters into the inheritance of literary, historical and scientific enquiry which has characterised recent centuries, and gives thanks for the knowledge of God’s ways with humanity which are open to an informed faith.”

He said it was “an important gift to the church to have people to remind us what discipleship is” and that it was rare for a Moderator to be able to launch three books.

UTC Principal Rev. Peter Walker said that it was a “joy” to witness the launch.

“What a joy it is to…acknowledge together years and years of thoughtfulness and scholarship,” Rev. Walker said.

He played tribute to, “The amount of the self that goes into those pages.”

“The Vital Leadership Team is a gem,” he said.

“To have three books launched in the Vital Leadership Team must be some kind of record.”

“Your whole selves are in these works.”

Rev. Dr Walker also thanked Rohan England and Melissa Wang for their roles in organising and running the event.

The three books are now available for purchase.

PrevPreviousSuicide prevention stakeholders need to work together, Lifeline says
NextFaith has not been cancelled: a response to Barney Zwartz  Next