Home
Reviews
Big Screen
Why do we create art?

Why do we create art? 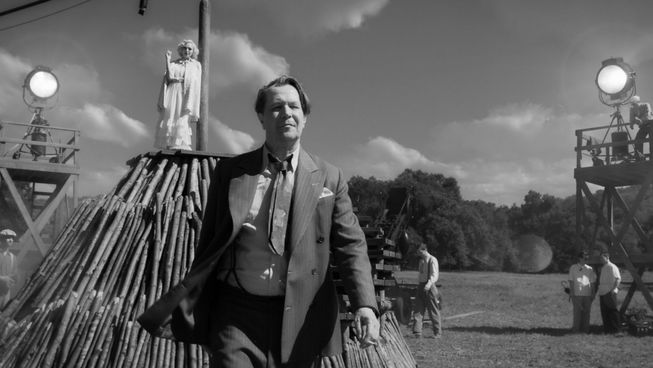 Anyone with any interest in film would have to consider Citizen Kane as one of the greatest films of all time. Even though it was released in 1941, Orson Welles classic still manages to top the ‘best of’ lists around the world and continues to be shown in art theatre festivals annually. As we move through history, fewer people may admit to seeing the fictional biographical of the wealthy newspaper publisher, Charles Foster Kane (Orson Welles). Yet, if you consider yourself a cinephile this is a film that must be on your watch list. Or, if you have the joy of engaging with Welles’ classic for the first time, be sure to relish in the wonder of it all.

Interestingly, Mank is about the writing of this cinematic classic, but the focus of the film is not on the legendary director, but on the master screenwriter who wrote one of history’s greatest works. Herman J. Mankiewicz (Gary Oldman) was known for a certain humorous and satirical writing style that made him a mainstay in Hollywood for over three decades. His bombastic manner and humorous anecdotes made him a favourite at all the parties around Tinseltown, especially at the home of media mogul William Randolph Hearst (Charles Dance) and his starlet wife, Marion Davies (Amanda Seyfried).

Mankiewicz’s story is told by director David Fincher(Gone Girl, The Social Network)based on a script that was written by his father, Jack. Beautifully created in the black and white hues of film noir, audiences are treated to scenes that travel from Herman’s convalescence after a car accident to a series of flashbacks. This visual style manages to transport the audience back in time but does not diminish Mankiewicz’s colourful lifestyle. While we get to see how he managed his craft and wrote the infamous script, the flashbacks provide the ingredients that would go on to influence the writer’s creation. There has been artistic license taken with the screenwriter’s story, but the artistry of it makes it accessible to those who hope to take a deep dive into cinematic history.

Gary Oldman continues to prove that he is as masterful at his craft of acting as the writer that he portrays is in his prose. His performance captures the light and shade of this captivating personality who was both brilliant and tragic. Showing how many in this line of work walk a fine line between genius and madness. Oldman manages to maintain his central position in this comedic universe, while all the well-placed cast members orbit around him in perfect balance. Arliss Howard as Louis B. Mayer, Charles Dance as Hearst and Tuppence Middleton as Sara Mankiewicz provide the needed layers that build this fascinating biographical sketch. Yet, the stand-out supporting roles belong to Seyfried as Marion Davies and Lily Collins as his typist, Rita Alexander. The woman whose name became the inspiration for the name Susan Alexander Kane.

One thing that will capture everyone’s attention about this film is how it manages to honour the whole process of getting a great film made in Hollywood. A nuanced process that proves that there is no true formula within the journey. Many times, it comes through a series of events and a combination of personalities. David Fincher manages to show how he continues to be one of the most innovative and well-rounded storytellers in the business. Taking his father’s script of Herman J. Mankiewicz and breathing life into someone who may have become a footnote in history. Even though the celebrated writer/director has had an outstanding career, Mank proves to be one of his best films in years. It may not be the classic that Citizen Kane continues to be for many, but it manages to masterfully reach into its history and give it a new audience, one that both films deserve.

To appreciate the artistry of David Fincher’s film it would be worthwhile seeing Citizen Kane to fully appreciate the brilliance of Mank. The nuances of the script can only be enjoyed if you know the story that Herman J. Mankiewicz eventually wrote for the big screen. Both films should be required viewing for anyone who takes filmmaking seriously.

While watching Mank, there is a deeper question to consider. Why do humans create art? It is a complex idea to consider, but the simple but profound answer is that a creative God forms us. The true master artist inspires the best of art. The human form and the rest of nature arouse the artist in all of us because it is part of our very DNA. The created are creative because we are the artistry of the master creator.

Mank is now showing in cinemas. It streams on Netflix from 4 December.