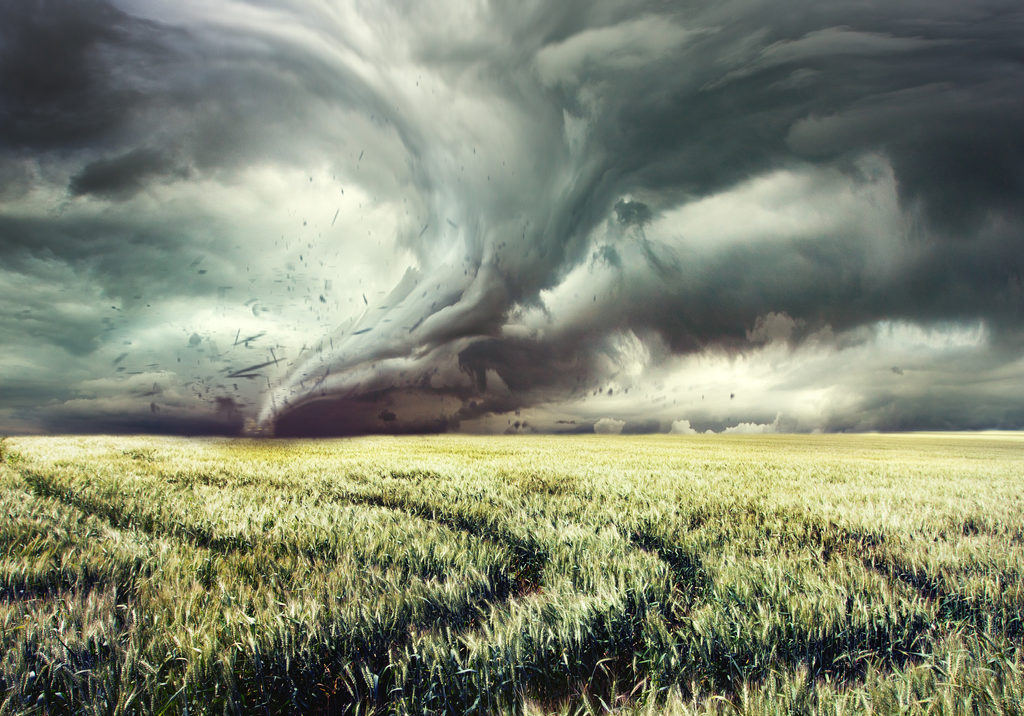 Tornadoes have the fastest winds on Earth, and while hurricanes/cyclones have wider impact, tornadoes are the most destructive. They are formed when cold and hot air mixes in a deadly waltz and although they occur worldwide, the US has the most, and the fiercest, due to its geography. The deadliest was in 1925 – over 700 people – but in 2011 there were over 500 deaths. While forecasting has improved, tornadoes’ destructive power is exacerbated by their individual unpredictability, and population increases put more people in harm’s way.

Tornado Alley, in the middle of America’s Great Plains, is tornadoes’ ballroom, and it happens to be the place where Christian belief is also particularly prevalent, a combination that means there has been a lot of theological speculation over the years on the phenomena, something explored in Peter Thuesen’s book, which is as much theology as meteorology.

Tornadoes, as with other natural disasters, are a particular challenge for the idea of providence, that God intends things to work out for the best, or even that God provides disproportionately for the faithful. Since the European settlement of America, tornadoes have been a spectacular provocation for asking why one person is killed, or their house destroyed, while another is spared. Why does God permit, or even intend this to happen? (Thuesen emphasizes a kind of American exceptionalism but bushfires or floods may prompt the same question for Australians.)

The English colonists, says Thuesen, used the weather to describe God, echoing Old Testament language, where God is in the whirlwind, but they also saw God’s hand in the weather, reading into natural disasters God’s intention, and especially God’s concern for the faithful. Whereas these days we might question God (or even his existence) when natural disasters happen, New Englanders were likely to flock to churches after storms, fearful that God was punishing them and calling them to repentance. One minister, preaching on the Lisbon earthquake, which the likes of Voltaire thought proved there was no God, said that it was a sure sign of God’s punishment of those idol-worshipping Catholics. But there were also those who questioned this theology, especially when the faithful conveniently saw storms as a test of faith for themselves but punishment for their neighbours.

The historian of folk beliefs Keith Thomas wrote that once providence gets a hold intellectually, it is all-powerful and hard to dislodge (like, I presume, the ideas of American exceptionalism or that the US election was rigged). The arguments of the Enlightenment philosophers didn’t really shake (in the US) the idea of God being behind tornadoes and destructive storms, but there were arguments over how much humans could read into the weather. One clergyman said that if every bit of bad weather was a sign from God then God must be worryingly chaotic in his ways. Randomness in nature is just part of God’s plan. Others thought this argument was on the slippery slope to the disengaged ‘Watchmaker God’ of Enlightenment deists.

In the early twentieth century there were debates about whether prayer can change the weather. Some said, of course not. Thuesen notes that this was a change from the certainty of the colonial era, where praying for storms against the enemy was commonplace. And today, prayers for rain, say, are commonplace in churches, consistent with Jesus’ instructions on how to pray.

In debates over theodicy, many have returned to the Book of Job, and to its ‘non-answer’ to the question of why bad things happen. But today many evangelicals (many of whom live in Tornado Alley) persist in seeing disasters as signs from God, and Calvinist theologians tend to be strong on providence, and baulk at mention of a chance-filled universe. However, the random path of a tornado is not easily explained theologically, and trying to see some purpose behind the death of a child, say, can compound grief. Yet Thuesen writes of one example of a father driven to, rather than away from, faith because of the inexplicable death of a child.

Thuesen suggests that chaos theory upsets providential theology but that unpredictability also upsets the progressive notion that science can explain all. In the end, uncertainty might be good for faith. Many tornado watchers speak of tornadoes in terms of inspiring awe, and maybe there’s a touch of religious awe in being humbled before something unpredictable and more powerful than ourselves.

PrevPrevious“We could get married!”
NextMarch4Justice rallies to protest gendered violenceNext