Home
Reviews
Press Play
What is the value of community?

What is the value of community? 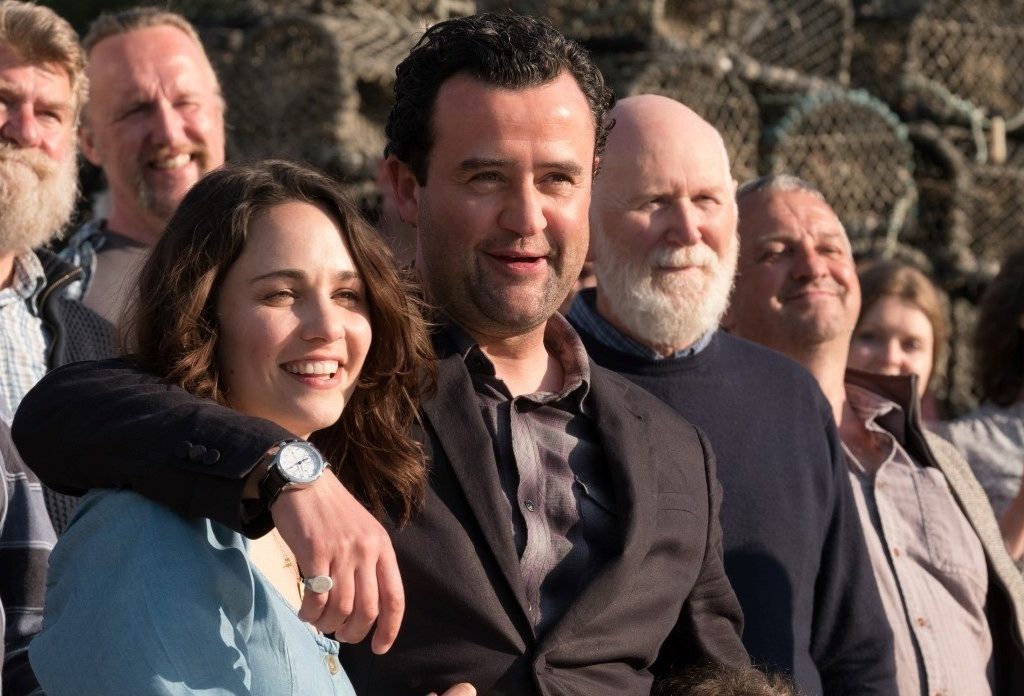 In modern workplaces, there are methods to develop better work environments by incorporating music into the daily lives of workers. What seems like an original concept has truly been an effective means of developing camaraderie and unity amongst workers for centuries, especially amongst sailors and fisherman. Shanty-style folk songs have provided a rhythm for seafarers to work in unison and to interject a bit of joy into their daily routine.

Over the decades and into the present, the fishermen of Port Isaac, Cornwall (UK) were known for their fierce loyalty. They had a devotion to their community and for a penchant for traditional shanty-singing. The men sing on the boats as they fish for lobster and on the local dock for the townsfolk on the weekends. It was during one of these performances that a group of music producers happened along to the small seaside village for the celebration of a mate’s wedding. Danny (Daniel Mays) was dared by his friends to get the group of fishermen signed to a deal. Despite being a bit sceptical, he did hear something worth investing in with these ten weather-beaten men and the modern spin on the musicality of yesteryear.

While working his magic on the record producers to take a punt on this unassuming ‘buoy band,’ the young music executive had to convince the sceptical group of fishermen to consider recording their songs. He had to work to understand the hearts of these men and how to gain their trust, which was not something they gave away quickly. Especially when Danny begins to take a liking to the beautiful daughter of one of the men, he had to determine if he is there to discover new talent or to find love. As this city boy becomes more intertwined with the community, the lobstermen and their families, he begins to find out what truly matters in his life.

Based on a true story of the discovery and rise to fame of the Fisherman’s Friends, this proves to be a charming musical tale that will reel in audiences from around the world. Framed as an average-person’s feel-good film, this is not a new concept. Yet, it does contain a heart that offers an endearing spin on this familiar style for audiences to enjoy. To think that a band of salt-of-the-earth men could become one of the best-selling musical acts in 2011 proves to be inspirational and motivational for anyone at any stage in life.

The cast acts as if they are enjoying every minute of this production. Each seems to bask in this ridiculous, but true, premise and enjoy representing real-life people within this community. The majority of the acting talent are some of England’s greatest character actors, proving that they work best within an ensemble. Feeding off the quick wit and jovial nature of their counterparts with enthusiasm and gravitas. These actors manage to show how this group of men value their friendship, families and community over fame and fortune. Even though they did not seem to mind the attention that does come their way.

Daniel Mays is an unlikely romantic lead. Still, his unassuming manner makes his influence over the villagers and Tuppence Middleton’s (Downton Abbey) character, Alwyn, believable and genuine. The small-town romance became a side benefit and anchor that will pull people into this story. A film that contains compelling characters, heartfelt music and an honest portrayal of the relationships. This surprising musical is one that will capture the hearts of men and women alike with its unassuming charisma.

Fisherman’s Friends capitalises on a beautiful depiction of the value of friends, community and family. Regardless of their season of life, everyone needs others to enjoy being together. Each person within a group offers something different and this shows the reason they are there. Communities change as people travel through life cycles, but this does not diminish their importance.

The concepts of friendship and community have winning applications and examples in the Bible. From the bonds of David and Jonathan, the letters written by Paul and the example of Jesus and his disciples, we can see the need for these individuals in this earthly existence. If this film does anything, it might be a challenge to call up a few friends to get together and invest in a gift given to us by God: community.