We Care for Central Coast community

Situated on the Central Coast, Toukley Uniting Church has a small Congregation and most members have celebrated their 80th birthday. The offertory is understandably modest and Toukley hasn’t had a paid minister for five years.

Derryck Klarkowski is chair of the Church Council and he remembers how, a year ago, Toukley’s “gradually dwindling” Congregation had a massive choice to make.

“There seemed to be two things we could do: sit and wait for people to come to us, or throw ourselves into the community and take our church to them,” explains Derryck about the crossroads Toukley Uniting found itself at when a local charity handed it an unusual opportunity.

A couple of dedicated local mums had started a community program that distributed donated children’s items to families in need. Despite its reputation as a nice holiday destination, the Central Coast has high levels of poverty (particularly in Wyong Shire, which Toukley is part of).

Roughly, one quarter of households in Wyong Shire have a combined income of less than $600 per week, excluding single aged pensioners. $600 per week is Australia’s household poverty line. Add in another shocking statistic of about one in six children (aged 0-19) reporting child abuse, and Toukley Uniting Church is surrounded by extreme pain and need.

When the program became too much for the mums to manage they offered the program to Toukley Uniting in March last year, and Toukley took it on.

But how could a small Congregation with no minister actually operate a sizeable social welfare program? “We had been investing thousands of dollars into our outreach because you can’t just ignore the poverty that surrounds our church,” Derryck candidly reveals. “This time last year, if you looked at our accounts, our church funds were spiralling downwards. We had 30-month’s financial life left, basically. Taking on this program with diminishing offering income, low funds and an ageing Congregation was irrational, but just seemed right!”

Toukley not only survived but thrived, expanding and diversifying the program under the banner of We Care Uniting. “We got involved with the community. We partnered with the local neighbourhood centre and many groups and people. We were helping people in need with hands-on action and the community responded with support. We now have the wonderful problem of managing overwhelming community generosity. Volunteers are joining us, and sponsors.”

“Our major program, the vulnerable children’s support program, is based on public donations of items,” explains Derryck. “Everything we give out, we have received as a donation.

“What that means is we have very, very large outreach programs that are largely self-supporting and don’t drain our church resources.”

Building on the base of around 6000 inherited items, ranging from clothes to prams, Toukley Uniting has distributed more than 4000 items to date. The Church’s facilities are now struggling to house the 10,000 items it carries (valued at more than $80,000), that is distributed to vulnerable families with young children.

There is a huge stash of donated clothing, nappies, linen, essential care and safety equipment to be distributed to those with most need.

Rev. Maz Smith is minister at nearby Warnervale Regional Uniting Church. She and Derryck are cooperating to get We Care Uniting adopted by their entire zone, to become a vulnerable children’s support project owned by all Uniting Church members on the Central Coast. These plans for expansion require additional funding and an advisory board, but Maz believes the potential benefits to Congregations who get involved will far outweigh obstacles.

“The hopeful thing behind this is that it gets Congregations out of their own self-focus and the kind of competition that can happen between Congregations; to be the one that survives,” explains Maz.

“That sounds a little cynical; I don’t mean it to be. I think the Uniting Church spends a lot of its resources on maintaining worshipping communities. There is an element of necessity and truth in that; the Christian community is to be a worshipping community. But we are also to be a community at mission. 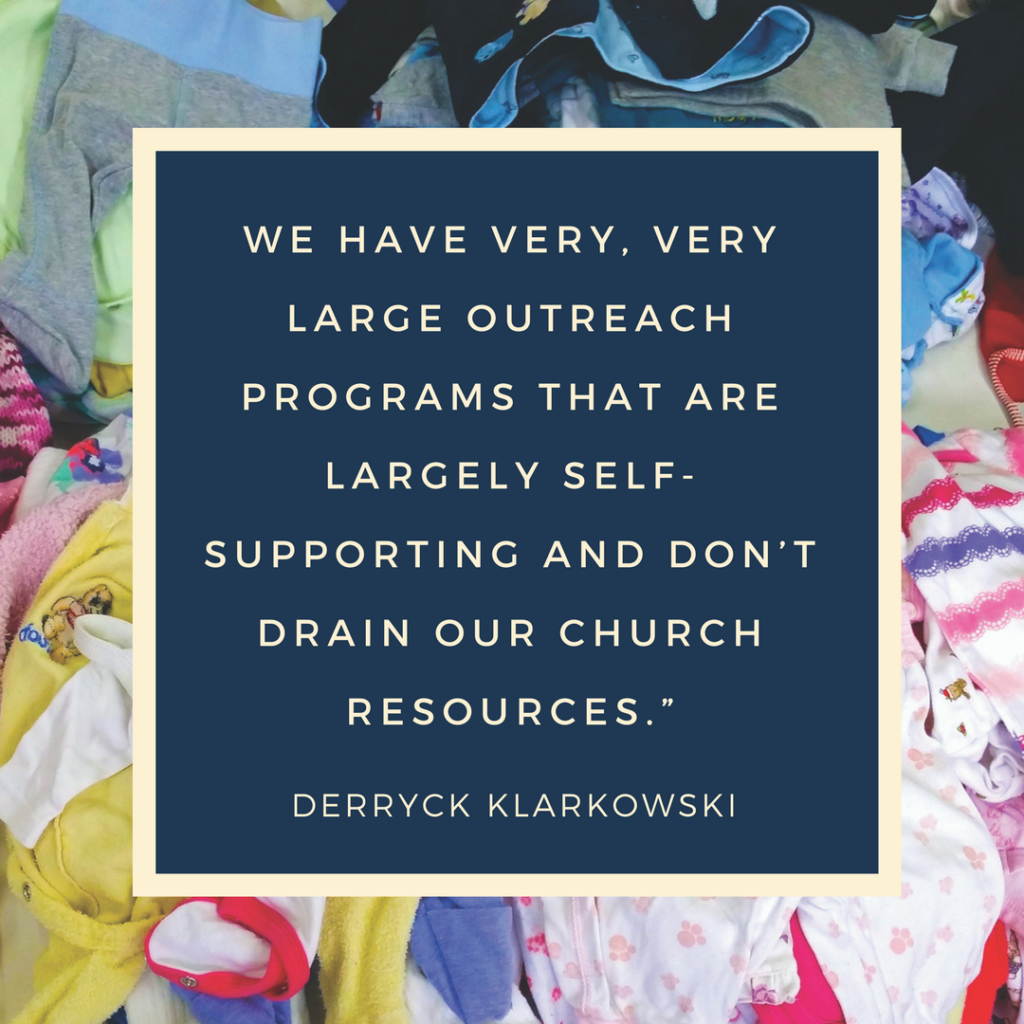 “If [We Care Uniting] is the mission that is connected with and supported by a number of Congregations around the zone, it becomes something owned by the Uniting Church rather than owned by a Congregation. And the viability of the particular single Congregation is then not the driving thing that measures the mission. The mission can be valued on its own standing and still have the support of worshipping people.”

Derryck is also honest about how the We Care Uniting outreach program impacted Toukley Uniting. “To date, our church’s Sunday Congregation hasn’t increased… We’ve lost quite a few longstanding members.” Those members were uncomfortable with the church shifting so much of its focus to social injustice.

“If we could start again, knowing what we now know, we would manage the transition far better. But on balance, we now have many younger volunteers from the local community who are working their hearts out during the week.”

“In other words, our church has changed; it’s revitalised. Our church is now quite vibrant with younger people working with us. We don’t know where that’s going to lead but you never know. Now, we have opened the opportunity of some conversion. Maybe some of those younger people will come along and join into the Christianity side of it all.”

The Toukley Congregation believes that actions are more powerful than words, when it comes to its Christian core and community promotion of the We Care Uniting program. But is sharing the Christian faith part of the program?

Keenly aware of the publicised debate Uniting has been involved with regarding how “Christian” it is in the public space, Derryck affirms community donors, supporters, beneficiaries and volunteers all know it is a Uniting Church program.

“We work out of a church; it’s obvious. We can’t hide that and we don’t hide it,” says Derryck. “One of the things that has been very interesting is some of our volunteers have said to me, not unexpectedly: ‘We’re surprised that a church is doing this.’”

“We believe evangelism is much stronger if people discover Christianity through what we do… The more we grow, the more people will have the opportunity to discover our faith through deeds.”

“We don’t push it by word of mouth but we’re not ashamed of it and it’s clear.”

One volunteer confessed to Derryck that working in the church had got them thinking more about God. Maz adds that Toukley Uniting Church is also enjoying its strongest community profile in years. For Derryck, such responses support why Toukley Uniting decided to run with the program.

“We’re quite astonished at what has happened. God has tipped in a powerful amount of yeast,” says Derryck.