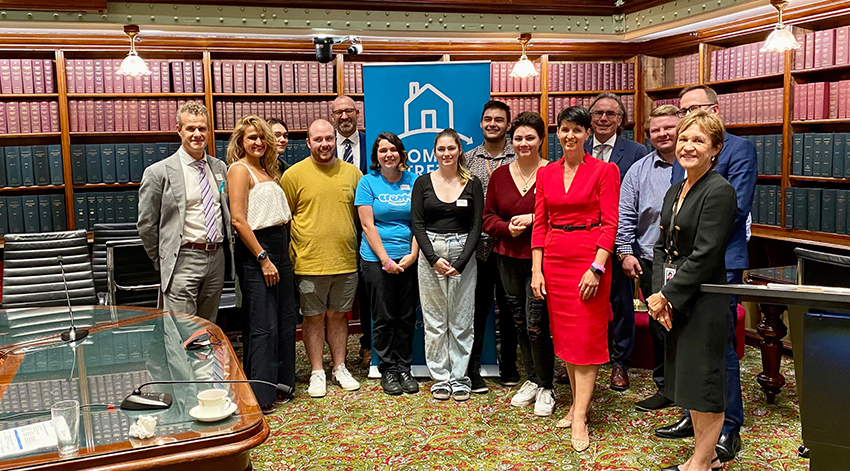 Uniting believes that everyone should receive the same opportunities to be supported in a safe, secure and caring home beyond 18 years, and this is the foundation of a pilot program being offered to young people in out-of-home care with Uniting.

Uniting NSW.ACT launched the extended care pilot program in 2019 which provides young people with an additional three years of care, combined with mentoring by a Youth Development Coach, helping them to transition to independence.

Tracey Burton, Chief Executive Officer from Uniting NSW.ACT said “Studies by the Australian Institute of Family Studies have shown us that almost 50 percent of young people aged 20 to 24 continue to live at home with their parents, yet this is not an option for young people in care in NSW.”

“Having a system that gives every young person in out-of-home care a guarantee of continued support until 21, coupled with a youth coach from the age of 15 and other care and support options, is an early intervention and prevention approach that will help forge an individually tailored path to independence and offer every chance of success in life,” said Mrs Burton.

In NSW, there are more than 16,000 children and young people in out-of-home care (OOHC). Approximately 1,200 young people exit OOHC each year.

Young people living in OOHC are amongst the most vulnerable in society, compared to young people not in care and often have limited social, family and peer networks which leaves them with less support as they transition to independent living. Forty-eight percent of young people in care who are under the age of 18 report being ‘not at all prepared’ or only ‘a little prepared’ for leaving care.

Young Australians who leave care at 18 or younger without support are more likely to experience major hurdles including unemployment, homelessness, pregnancy during adolescence and jail within the first year of leaving care.

The importance of extending care to 21 years in NSW gives young people a better chance of exploring their dreams, interests and aspirations, without the pressure of being forced out of home.

Tarrah is nineteen and on her journey out of foster care towards independence after spending her life in the foster system. She is proud to be the first person in her family to complete Year 12 and is now a student studying a Certificate III at Sydney Make Up & Beauty School.

“I have been in the foster care system since I was two and been with six families in 16 years,” said Tarrah. “Being in the Uniting Extended Care Pilot made me feel like someone is actually going to be there for me and help me through the next few years of my life while I become independent and can live on my own,” said Tarrah.

In modern Australia, support is provided to most young people by their families, including secure housing, education, training and help finding employment. The disparity for young people leaving out-of-home care at 18 is stark; many must start thinking about independence from the age of 15 and may have to leave care during year 12.

“Uniting’s Youth Development Coaches employed by the Extended Care Pilot are already working one-on-one with young people, providing them with tailored information and guidance about education, employment, health and wellbeing, life skills and to create opportunities for community connections which align with their interests,” said Mrs Burton.

Under the extended care program, young people also remain living in stable and supported housing until they turn 21, which could be with their current carers or in alternative supported accommodation elsewhere.

Uniting is a partner of the nationwide Home Stretch campaign which calls for all states to follow the lead of Victoria, Western Australia, Tasmania, South Australia the ACT and the NT in extending care for young people until the age of 21.

“We strongly encourage the NSW Government to look at the international outcomes where care has been extended to 21 years, as well as the independent evaluation of the Uniting Extended Care pilot program,” said Paul McDonald, National Chair of The Home Stretch Campaign.

“For too long we have talked about the issues faced by disadvantaged young people leaving care without taking action. We know that those additional three years of care are critical to good long-term outcomes for young people rather than forcing them to become independent before they are ready,” Mr McDonald said.

“This approach is also integral to our church mission of supporting vulnerable people and will be a game-changer for the long-term life outcomes for young people leaving care,” Uniting’s Tracey Burton said.

Uniting NSW.ACT would love to hear from Uniting congregation members who have been foster carers, or who are currently providing foster care and hear your thoughts on extending care to the age of 21 years. To share your story contact media@uniting.org.