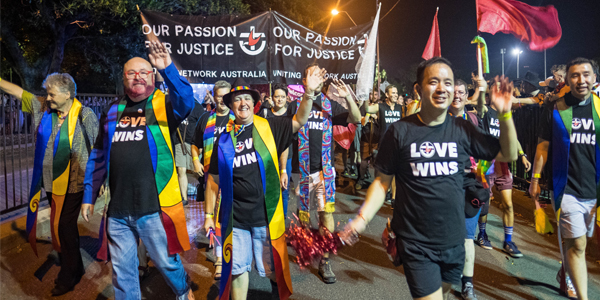 Their participation in the Sydney Mardi Gras takes place mere months before the Uniting Church meets to discuss same-sex marriage.

Keith Gerrard is the co-convener of Uniting Network.

“We’re marching in celebration of civil same-sex marriage passing earlier this year and of our Christian belief that love will win in the end,” he said.

Uniting Network is a national network of LGBTI people and their supporters in the Uniting Church in Australia.

“God is love, so wherever you find love God is there, whatever form it takes,” Mr Gerrard said.

Uniting Church members have marched in the parade on-and-off for the last 30 years.

“We’ve been coming out since 1988 and we’ve been a part of Uniting Church life since before that. We’re not an issue for the church, we are the church.”

Eighty Uniting Network members gathered at Pitt Street Uniting Church to sing, pray and celebrate communion before making their way to the marshaling area to take part in the parade.

Members donned black Love Wins t-shirts and marched to the sound of a dozen drums.

Uniting Church ministers are only permitted to act as marriage celebrants according to the rites of the church, meaning they are unable to officiate at same-sex weddings under the newly-passed civil legislation.

A proposal to develop a rite for same-sex weddings was brought to the 2015 Assembly meeting, but was delayed in favour of a three-year listening process called ‘Space for Grace’.

The Uniting Church will discuss the matter at National Triennial Assembly between 8 and 14 July 2018.