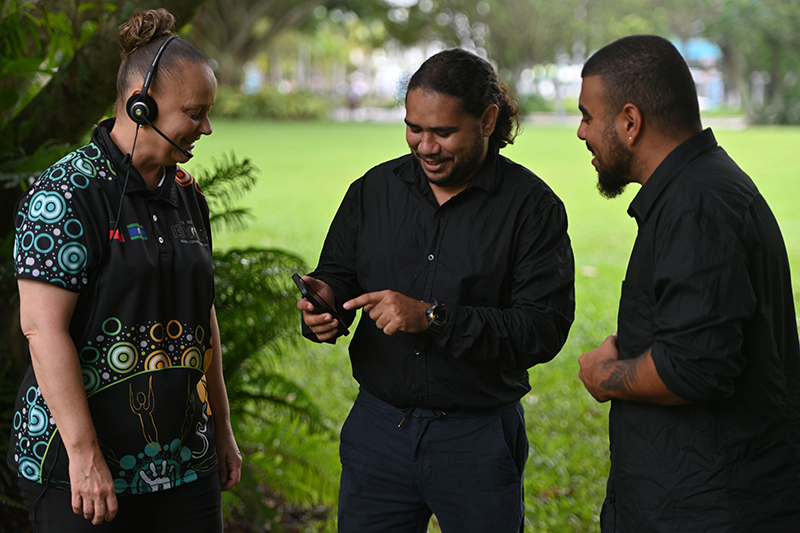 The ceremony was held in the Yallamundi Rooms at The Sydney Opera House and featured MC John Paul Janke overseeing a smoking ceremony and cultural dance, as well as a musical performance from leading Indigenous artist Marcus Corowa.

Funded by the Australian Government (through the Department of Health), the purpose-built, 24/7 national telephone helpline was codesigned with Aboriginal and Torres Strait Islander people and is run with the support of Lifeline Australia.

More than 2,500 calls to 13YARN were answered in October 2022, which is an increase of 500 on the previous month. In the first 10 days of November, the service answered over 1,000 calls and is on track for its biggest month to date.

“The more we have gone out into the community, the more trust we have been able to build – by showing mob that we are listening to their needs and yarning about the ways in which we can help them when they are feeling overwhelmed or doing it tough,” Ms Burney said.

“On average, our First Nations Crisis Supporters are helping keep over 100 people safe a day – and this call volume is growing week on week.”

“We believe there is always hope at the end of a yarn. We know how to listen without judgement or shame, and we believe in the power of storytelling to heal.”

Mrs Anderson said that the service filled a gap that had existed for Aboriginal and Torres Strait Islander people for too long.

“This one-of-a-kind service has been designed from day one to be culturally appropriate and is there to make sure any mob who are having difficulty coping have their own place where they can connect and get help from a trained Crisis Supporter who understands what they might be experiencing,” Mrs Anderson said.

Anyone can access the line by calling 13 YARN [13 92 76] around the clock, where they will be assisted for their immediate situation and, if necessary, referred to culturally appropriate programs and services to make sure there is ongoing support.

Funding for an independent evaluation of the impact of 13YARN has been included to ensure the service stays on track and remains fit for purpose.

13YARN [Thirteen YARN] is the first national crisis support line for mob who are feeling overwhelmed or having difficulty coping. We offer a confidential one-on-one yarning opportunity with a Lifeline-trained Aboriginal & Torres Strait Islander Crisis Supporter who can provide crisis support 24 hours a day, seven days a week. 13YARN provides the opportunity to yarn without judgement and provide a culturally safe space to speak about their needs, worries or concerns.

If you, or someone you know, are feeling worried or no good, call 13YARN on 13 92 76 (24 hours/7 days) and talk with an Aboriginal or Torres Strait Islander Crisis Supporter.