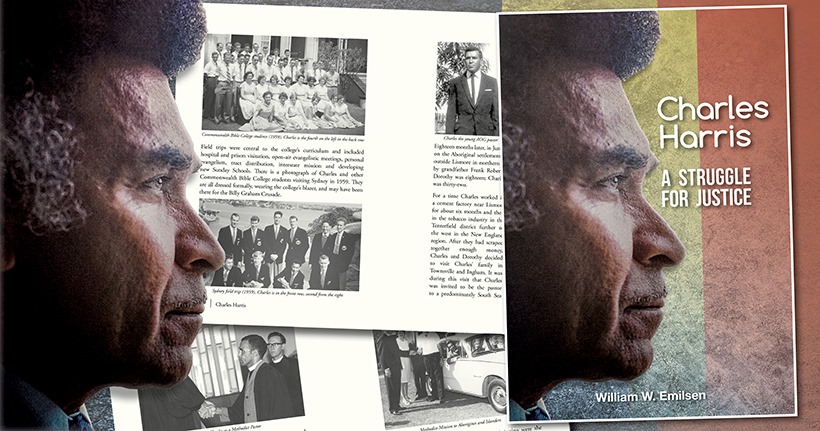 A Struggle for Justice tells a gripping story about a man who should be celebrated as central to recent Australian history. Charles Harris is a giant in Australian indigenous religion, as Founding President of the Uniting Aboriginal and Islander Christian Congress and main organizer of the Aboriginal March for Justice, Freedom and Hope on 26 January 1988.
Dr William Emilsen has written a superb biography of Harris, scholarly, thorough, highly readable and engaging, and above all important for its contribution to public knowledge of a great Australian. The background to this story is the traumatic pathology of the physical and cultural genocide of Aboriginal Australia, in the direct harm to Aboriginal people and in the culture of silence resulting from white Australia’s denial. The emerging message is the potential of Christian faith to provide a universal reconciling story for all.

There are several themes of great interest in Emilsen’s excellent account. The role of the Uniting Church in supporting indigenous spirituality is a constant, as are the various political tensions generated by Aboriginal religious activism. The personal story of Charles Harris has much broader relevance than within religious history alone, with his unwavering Christian faith, his strong Biblical foundations, the political importance of his achievements, and also the growing radical anger that built up in his heart over the course of his life, grounded in the gospel values of the life and witness of Jesus Christ.

The record of events in this biography is of immense value, especially with the establishment of the Congress and organization of the 1988 March, which became both a way of mourning the impact of loss and a celebration of an emerging vision of support for Aboriginal identity. Charles’ speech to the rally in Hyde Park emphasized Aboriginal spirituality as a foundation to work together.

The role of theology in generating political change is highly contested. Christian missions in the colonial period had a deeply ambiguous role, in some ways helping to protect Aboriginal people but in other ways participating in the broader process of cultural destruction. Charles Harris began within a Pentecostal environment, seeing faith in dogmatic literal spiritual terms, but his attitude steadily shifted to a focus on doing the will of God on earth. Toward the end of his life, cut short by heart disease, he told the Uniting Church that his harsh words came from the depth of love, commenting that “the vocation of Christians is to change the world, not to draw people out of the world” (p207).

Such views about social justice were not accepted by all Aboriginal Christians, in view of the role of a conservative faith in providing personal protection against moral collapse from alcohol and violence, and in light of the ongoing influence of colonial theology that completely rejected traditional Aboriginal culture. Harris sought to unite both worlds, bringing together the political and religious dimensions of Aboriginal society, but the difficulties he encountered illustrate that social change is a slow process.

Developing a truly indigenous Christianity that can lead the process of cultural reconciliation in Australia requires a theology that is equally true to modern knowledge, to the heritage of Christianity and to the experience and identity of indigenous people. Reflection on such themes seems to have influenced Charles in his insistence that both truth and justice are central moral values. The steps that Charles Harris took upon this journey of healing are valiant and prophetic, and this biography shows how people today and in the future can build upon his great work of faith.