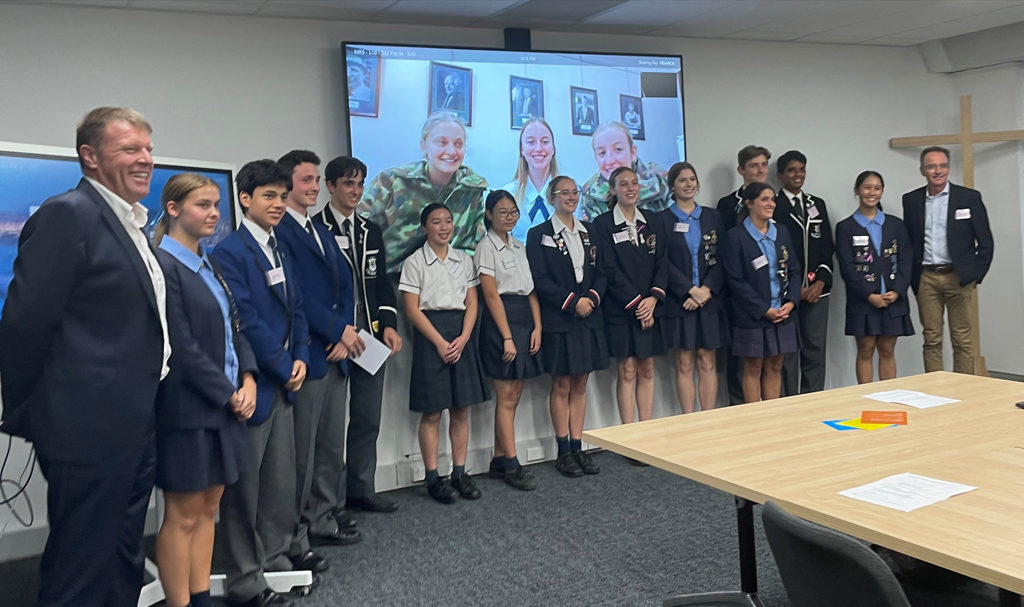 On 17 March a cohort of school leadership that represented Newington, PLC, MLC, Kinross Wolaroi (remotely on Zoom) and Knox Grammar met with the Moderator Rev. Simon Hansford and Rev. Stuart Bollom Director of Mission (Schools) for the Synod of NSW and the ACT.

For two hours the group met to discuss and prioritise the issues that mattered to them as a cohort and to begin to plan actions that will make an impact, like the Strike4Climate action in 2019.

“I have been in ministry for 30 years, and this is the first time in any real way, that people of your generation and in our schools have engaged with us in a positive way and I want to say we are really excited about that,” said the Moderator to the gathering of young leaders.

The cohort broke up into three groups and discussed and brainstormed at length the issues facing them and the community. They then reported back to the larger group their concerns and focus areas. They included issues such as consent, wellbeing and mental health, indigenous issues, bullying, gender equality, queer sex education and raising the students voices on these issues, both within their school populations and in the community.

“The idea of the school leaders workshops with the Moderator is for the church to be able to listen to the issues and concerns of students in our care. Our school chaplains are doing this on a daily basis, but it is important for the schools and the students to see that they are connected to the other Uniting Church Schools and to the Uniting Church beyond their school,” says Rev. Stuart Bollom, Director of Mission (Schools) for the Synod of NSW and the ACT.

“Working together the schools have over 10,000 young people, who are motivated by these issues. As a church, we are more intentional in working with people in the first third of their life. As such we need to listen to the concerns of young people and as a church get alongside the issues that they care deeply about.”

Asked to vote by consensus, the young leaders prioritised three issues to take further action on. Not surprisingly the issue that was front and centre for the cohort was consent and better and more informed debate and education for young women and men on this important issue recently highlighted in the media and Australia-wide marches. Other issues the group will focus on at the next meeting in May are around mental health and wellbeing and concerns about the environment.

The group agreed to meet again to plan concrete action plans and ways the schools can have a platform and voice in both the Uniting Church and in the community. These young leaders represent a cohort of 10,000 students across the state in Uniting Church schools.

“We are fortunate to have such a good relationship with all our schools; sadly this has not always been the case. Working with these young leaders is another avenue for us to celebrate the capacity of young people and to collaborate with them in their hopes for the world around us,” says the Moderator. “We do not want to have these – or any other – children either hidden in the background, or safely in a display cabinet, but to work alongside them in their passion for a just world. We are a church which affirms the critical role of lay people, of every age.”

Student leadership attendees were Conor Corcoran, Nicholas O’Shea and Rohan Ghandi from Newington, Katherine Gibbon, Emma Peters, Angelica Tan and Caitlin Kim from PLC, Maya Simpson, Claudia Bean, Mikaela Nguyen and Ana Trigg from MLC School, Oliver Sved and Nicholas Baker from Knox Grammar and Mackenzie Jones, Jess Moseley and Josie Mitchell from Kinross Wolaroi. Ravenswood students were unable to attend but will do so when the group next meets.

Also in attendance at the workshop were Karen Mitchell-Lambert, Pulse team leader, Emma Maiden, Head of Advocacy and Media from Uniting, Cathryn Taylor, from UnitingWorld and Rev. Punam Bent, Chaplain at PLC.