Should Forbes Have Pulled This Piece Calling Evangelicals Cruel? 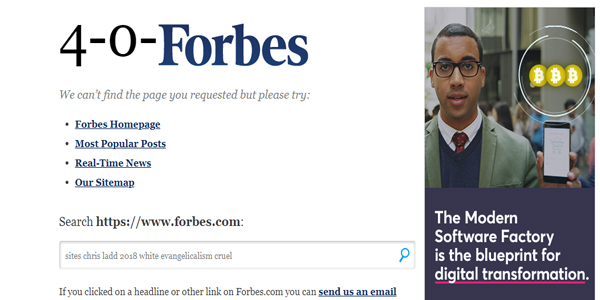 Prominent website Forbes has pulled an opinion piece that asked argued “Why White Evangelicalism Is So Cruel”. The piece, posted to Forbes on 11 March was removed with the website citing its contentious subject matter and portrayal of white evangelicals.

Written by Chris Ladd, a writer who blogs at Political Orphans, the piece has since appeared elsewhere. According to Ladd, American evangelicalism has divorced itself from Christ’s compassion for society’s outcasts. Having removed the faith’s concern for the poor and marginalised, Ladd argues, white evangelicals are instead obsessed about sexual immorality, except for when it is allegedly committed by politicians that their movement favours. This, he argues, is due to America’s history as an avowed Christian nation that practiced slavery and segregation.

“White evangelical Christianity has a bottomless well of compassion for the interests of straight white men, and not a drop to be spared for anyone else at their expense,” Ladd writes.

“The cruelty of white evangelical churches in politics, and in their treatment of their own gay or minority parishioners, is no accident. It is an institution born in slavery, tuned to serve the needs of Jim Crow, and entirely unwilling to confront either of those realities.”

Ladd’s  column particularly takes aim at the Southern Baptist Church, America’s largest denomination, for its defence of the status quo during segregation.

“Churches like First Baptist in Dallas did not become stalwart defenders of segregation by accident. Like the wider white evangelical movement, it was then and remains today an obstacle to Christian notions of social justice thanks to a long, dismal heritage,” Ladd argues.

“There is no changing the white evangelical movement without a wholesale reconsideration of their theology. No sign of such a reckoning is apparent.”

In a statement by Forbes posted online by Ladd, the website appears to cite the piece’s controversial subject matter and lack of a reply by one subject as violating the website’s terms of publication:

We took down your evangelical piece.  It was way out of bounds — painting the entire evangelical movement with a broad brush.
We also have a policy of not talking about social issues like abortion at Forbes Opinion — only economic policy and politics.  We try to keep things data driven.
Also, given your criticisms of Robert Jeffress, you should have reached out to him for comment.  As I noted in a recent email, it is extremely important to reach out for comment from anyone you personally criticize in your work.

“Why White Evangelicalism Is So Cruel” is a long form opinion piece, and needs to be read in its entirety in order to be properly critiqued. Similar opinion pieces about racism and Christianity have recently skewered American evangelicalism, including one from Sojourners, which explores “How Evangelicals Became White.”

A similar article-pulling controversy took place earlier this year, when Salon.com removed a piece that argued that the Bible is poorly written.