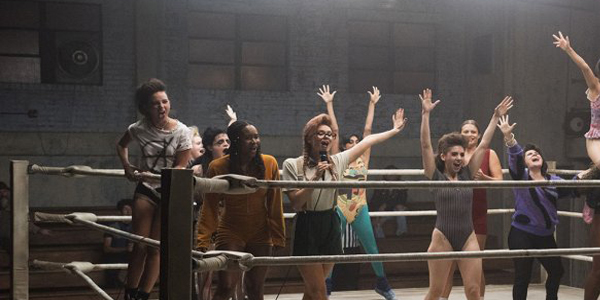 Set in the 1980s, GLOW is a Netflix original with a first season’s story arc surprisingly goes to the heart of friendship and forgiveness. As film critic (and pro wrestling podcast host) Clem Bastow writes, the show is “scrappy, empowering, and finally gets pro wrestling right.”

Loosely based on the Gorgeous Ladies of Wrestling show, GLOW centres on Ruth Wilder (Alison Brie). Struggling to pay her bills and get her big break in Hollywood, Ruth finds an unexpected opportunity at stardom when she is given an audition at a new TV show—the Gorgeous Ladies of Wrestling (GLOW). When her former best friend, and soap opera star, Debbie Eagan (Betty Gilpin), shows up on set to attack her (for real), Ruth finds herself selected to be the program’s main heel. But can she work with her estranged friend to pull off the promotion’s first major show?

Produced, written, and starring women, GLOW manages to capture the original promotion’s combination of “exploitative and liberating”. In a piece for Rolling Stone, series producer Liz Flahive suggests, “We wanted to look back on the Seventies—coming out of the women’s movement—and into the Eighties, and ask the question: Did it work? Did things get better?”

GLOW’s well rounded cast turn in a number of strong performances. Brie excels as Ruth. Marc Maron stars as sleazy producer Sam Sylvia. UK singer Kate Nash plays Rhonda Richardson aka Britannica. Another highlight is former wrestler Kia Stevens, who plays Tammé Dawson. A single mother who struggles to provide for her son, Tammé ends up playing the Blaxploitation character Welfare Queen. With the course of her arc devoted to how she deals with this character, the show manages to portray pro wrestling’s frequent love affair with stereotypes.

All of GLOW’s cast underwent wrestling training for the show, learning how to take bumps and perform a small repertoire of moves. Much like the show storyline, the cast reportedly had only five weeks to do this. Working with them on this was Lucha Underground star Chavo Guerrero, whose uncle Mando helped train the GLOW cast in the 1980s.

Written and co-produced by Jenji Kohan (Orange is the New Black, Weeds), GLOW features the usual hallmarks of a Kohan production, including razor sharp dialogue and a strong female lead. This also includes the usual liberal doses of swearing and adult references, and the show is not for those offended by such things.

With GLOW renewed for a second season, now is the perfect time to revisit the craziness that was the 1980s.

GLOW is streaming now on Netflix and is rated MA 15+